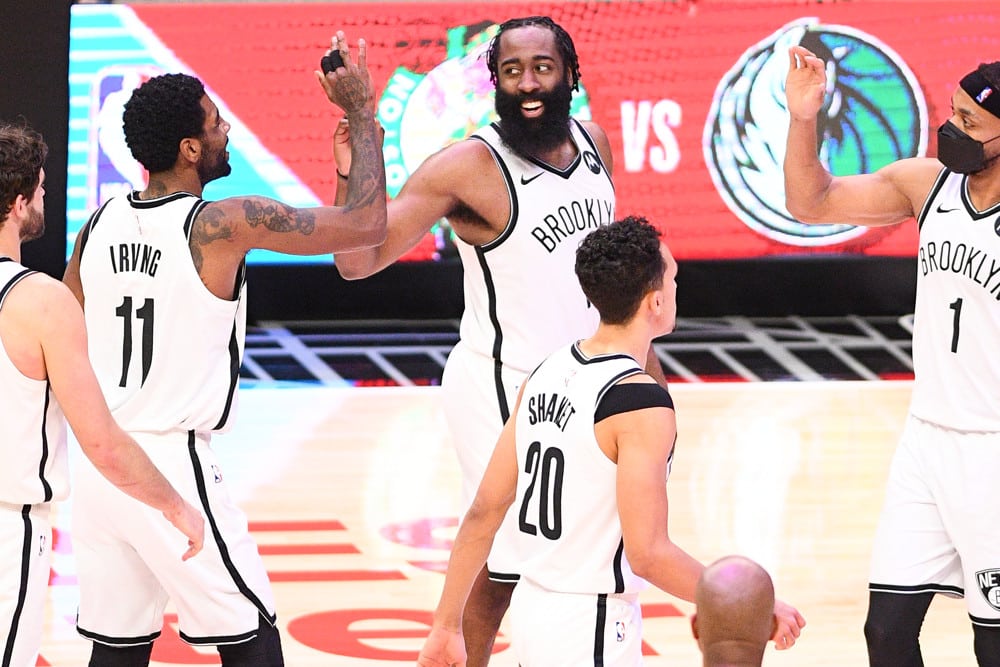 If you’re like me, you want to get over last night. Much to the dismay of bettors, each of the seven games played on Friday went under. Those riding the wave of Pelicans overs came to a crashing halt with the Cavs’ inept offense. Five-of-seven favorites covered, leaving the Rockets and Grizzlies as the only spoilers of the night. But that’s in the past so let’s move on to Saturday night with our Best NBA Bets for tonight’s sked.

Saturday features eight-games that tipped off at 2 PM ET, so there are plenty of opportunities to rebound from an off night. I’m fading the first contest with the Knicks and Thunder and will highlight a few later matchups that I’m feeling for tonight.

The Nets are one of the hottest teams in the league coming into Saturday, having gone 11-1 ATS in their last 12 games. Brooklyn took care of the Boston Celtics on Thursday night, defeating the East’s fourth-best team by 12 points. Superstar Kevin Durant remains out of the lineup with a hamstring injury, and the Nets haven’t missed a beat with James Harden and Kyrie Irving taking charge – blowing out opponents by a margin of +17.4 points over their last five victories.

On the other hand, the Pistons are the worst team in the Eastern Conference at 10-27, which doesn’t bode well for tonight’s matchup. Despite a near even record of 8-9 versus sub .500 opponents, Brooklyn’s scoring 125.3 points per game against losing teams. According to OddsShark, the Pistons are also 7-13 ATS versus the Nets over their past 20 games. Detroit is playing for a high lottery pick, and the combination of Jerami Grant and Mason Plumlee won’t be nearly enough to keep up with the surging Nets.

Portland comes into Saturday having dealt with another frustrating loss at the hands of the Phoenix Suns. I can’t think of a better team to take out that frustration on than the Minnesota Timberwolves. Vegas marks the Blazers as five-point favorites, and that still seems understated.

Think you know who will win it all? Check out the 2021 NBA championship odds.

The Blazers have been a profitable team on the road, going 12-6 ATS in away games and 4-2 as away favorites. In their first bout this season, the Blazers dropped 135 points on the Timberwolves in an 18-point victory and were favored by 10 points. Karl-Anthony Towns missed that game, but the T’Wolves still had Malik Beasley and D’Angelo Russell on the floor. The latter two players will not be in attendance for tonight’s tilt, leaving KAT and several fringe G-League players to keep the T’Wolves within five points. It’s a tall task considering the Blazers are 11-3-1 ATS in their last 15 games against Minnesota.

The Nuggets and Mavs game should be one of the best games of Saturday’s lineup – a pair of Western Conference teams that are firmly in the playoff race. The Nuggets play on the second leg of a back-to-back, which I think will impact the game script for tonight’s game. The Mavs are well-rested, as Luka Doncic and Kristaps Porzingis both took the night off against Oklahoma City on Thursday. The Nuggets eeked out a win over the Grizzlies last night 103-102, with MVP candidate Nikola Jokic playing 36 minutes. Jokic is questionable for tonight’s bout, and while he is likely going to suit up, this game is trending as an under for me.

The total has gone under six of the Mavericks’ last eight games, while the Nuggets have gone under five of their previous seven games, according to OddsShark. Denver comes into Saturday averaging 115.5 points per game on the road, while Dallas is averaging 111.6 points at home, so the 225 total seems right on the money. However, Denver has played great defense in their last five games, ranking fourth in the NBA over that span with a defensive efficiency rating of 104.1. The Mavericks pace of play dropped to 27th in the NBA over the past five games, to 96.10. All this to say, I think this game has the makings of a letdown, with the schedule parameters and pace of play impacting the game script.