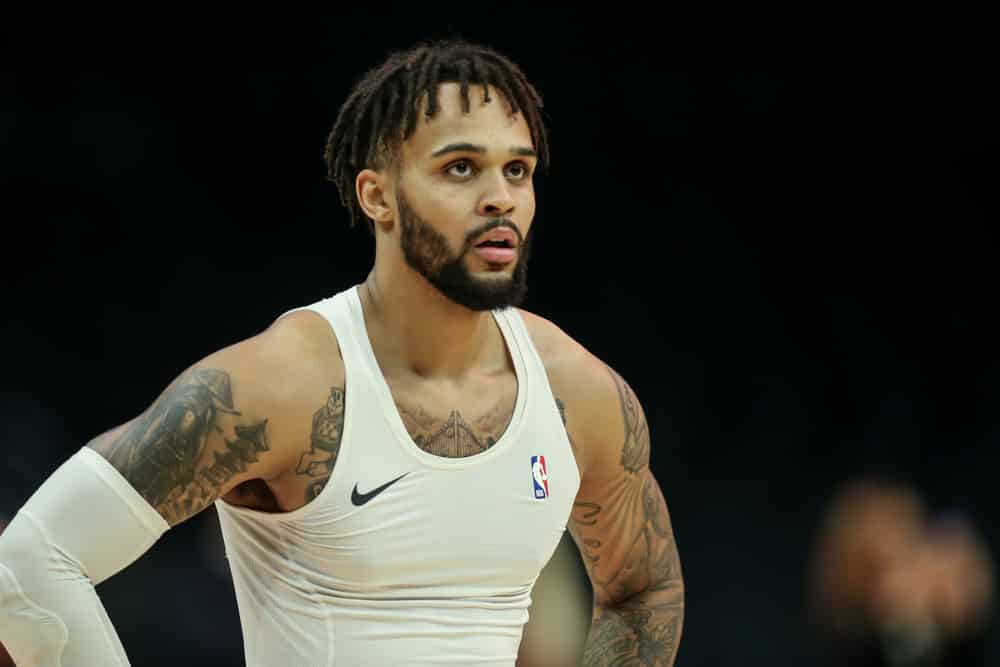 Howdy everyone! As the NBA rolls on post All-Star Break, so does NBA DFS. Saturday features a nice looking seven game slate. This is one of those slates where chalk isn’t necessarily going to be the best play. Feel free to tag along with my GPP lineup, and let’s cash something big!

Jrue Holiday finally returned to Milwaukee’s starting lineup last game, making his first start since February 6th. Although it wasn’t the most impressive of starts, what that does mark is progress. He played 25 minutes, and he’s surely to see that number increase.

Holiday averages a nice 32.8 FPPG which is great for his pricing. He was regularly topping the 40 fantasy points mark before his injury, and we can assume he will return to that production. I can’t pass up the chance to play Holiday, who is almost back to full strength, at a discounted price.

With D’Angelo Russell sidelined and Malik Beasley out on suspension, the sky is the limit for rookie Anthony Edwards. He continues to regularly take at least 20 shot attempts each game. He’s knocking his shots down too, as he’s shooting 37.4% from the floor and 30.4% from deep.

Edwards comes into this one averaging only 26.6 FPPG, but this number is misleading. He’s seen a usage increase due to Minnesota missing players and he’s now registered at least 30 fantasy points in five straight games. It isn’t pretty, but for only $6,500 I like the upside potential here.

Although Josh Richardson has been a tough player to get a read on this year, I’ll take a stab with him here. It was expected that he wouldn’t be quite as dominant due to more offensive weapons in Dallas, so his 23.8 FPPG average doesn’t bother me too much.

Richardson isn’t shooting the ball a ton every night, but he’s been extremely efficient this year. He’s shooting 44% from the court and 30.3% from three which are good numbers. He’s fresh off a 10-15 shooting night for 43.75 fantasy points. If he can repeat this effort, then he will be the steal of the night on this slate.

Danilo Gallinari has probably been the most disappointing players so far this year, but I’m going to play him in my lineup. He’s now topped the 20 points mark in two straight in route to 51.75 fantasy points followed by 33.25 fantasy points, so it’s possible a tide has turned.

There’s work to go around for Atlanta at the forward position with Cam Reddish and De’Andre Hunter still out. I’ll take a chance at Gallinari here for a cheap price of only $5,700. I know there’s a lot of risk here but I like the potential as well, as Gallinari could end up leading the game in scoring.

I’m going to stack the Hawks here by playing John Collins at the center position. He’s had a rough three game streak the past few games, but he’s normally a walking double-double. He averages 32.8 FPPG and regularly tops this mark as well.

Collins averages 30.6 minutes per game and he’s been extremely efficient on the offensive end. He’s converting on 53.2% of his shots, including 37.6% from three. His Atlanta squad takes on Sacramento on Saturday, and this is a good matchup for Collins. I expect him to put together a nice outing in this one.

As long as CJ McCollum remains out, I’ll continue to take a shot with Gary Trent Jr. in my lineup. The playing time is there for him as is the shot attempts. We all know there’s a variance when playing a mainly three point shooter, but I’ll indulge.

Portland squares away with the Timberwolves on Saturday. Minnesota ranks 22nd in three point defense, as they are allowing teams to shoot 37.3% from deep. For only $5,400, there’s a chance this is a home run play. If Trent can get some threes to fall, then I expect the winning lineup to contain him somewhere.

I want as much of Phoenix as I can, so I will take Mikal Bridges at the forward position. The Suns sit second in the Western Conference and have been the surprise team of the year. At the forefront of their surprises has been Bridges, who is having a breakout season.

Bridges is averaging 27.3 FPPG across 32.5 minutes per game which is modest in terms of NBA DFS. However, he’s been extremely efficient, as he is shooting 53.3% from the floor and an outstanding 42.1% from deep. Although he is hit and miss, for a price tag of only $5,400 you can’t beat the potential that is here with Bridges.

I’m going to wrap up this lineup with a Phoenix stack and the veteran point guard Chris Paul. I will say that he’s been having a bumpy season by his standards, almost a Jekyll and Hyde type of year. However, when CP3 is on, he is really on.

Paul averages a healthy 38 FPPG so far this season. Although he is only averaging 16.1 points per game, it’s his ability to provide stats other that points that gives him so much value. CP3 has the ability to top the 50 fantasy points mark on any given night, so I’ll play him in hopes that we get the all-star version of Chris. 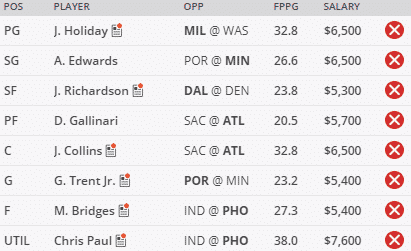