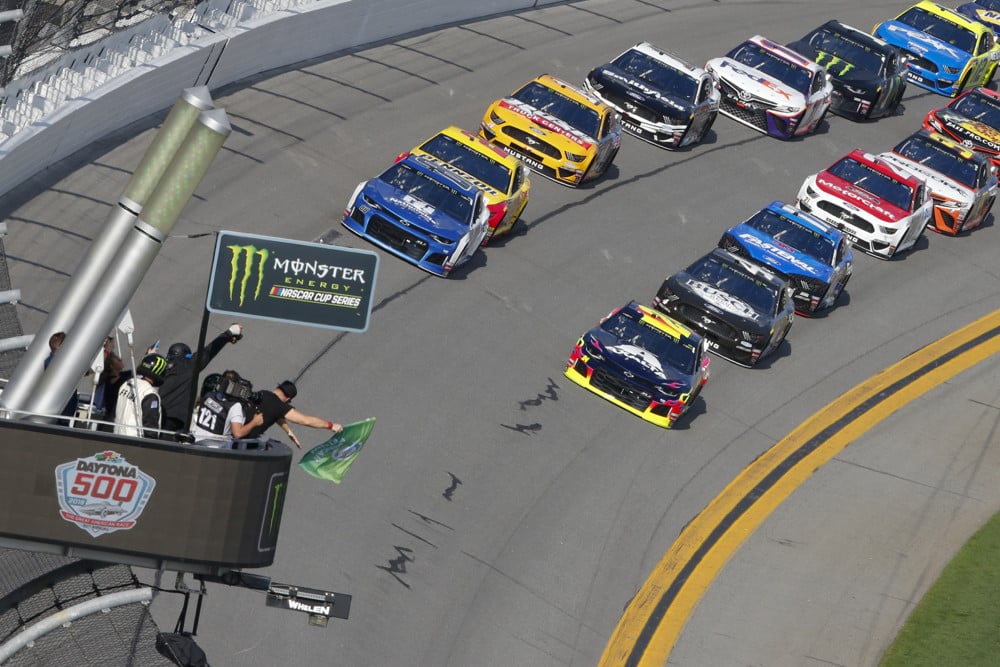 Strap in NASCAR degenerates! The 2021 season takes the green flag with the granddaddy of them all – the Daytona 500! With football season over, it is time to turn to NASCAR DFS for many degens out there and the Daytona 500 DFS slate is ripe for cashing in.

Here are all the important stats and picks you’ll need to help you with your DraftKings lineups.

Likely one of the most popular picks this week in DFS, but the ceiling is massive. Denny Hamlin‘s career at both Daytona and restrictor-plate tracks is nearly impeccable. He’s also one of the leaders in laps led at both Daytona and Talladega. He always brings a fast car to the restrictor-plate tracks. He also starts 24th in the field, giving him a huge ceiling for positional points. Because restrictor plate racing is so unpredictable, there are several alluring cheap options down the card to help offset both his popularity and his cost.

Ryan Blaney‘s career at Daytona is feast or famine. Since 2017, Blaney has four finishes 7th or better and four finishes 26th or worse. But he always drives a fast car at the track. Since 2017, only Joey Logano has earned more stage points than Blaney at Daytona. He also has led the most laps at Daytona in that same stretch. He annually has one of the best cars at the track, only to be caught up in bad luck by the end. Bank on his talent and fast car and hope he finds a little better luck this year.

Ross Chastain finally gets his big chance in the NASCAR Cup Series. Ross Chastain will likely get overlooked in this range for more popular options like Ricky Stenhouse Jr. or Matt DiBenedetto. But Chastain enjoyed a ton of success on Superspeedways in the Xfinity Series. Chastain won the July Daytona race in 2019 and owns eight other Top 10’s on Superspeedways in the Xfinity Series. He also finished 10th for the now-defunct Premium Motorsports in the Daytona 500 in 2019. Chastain also has a ton of upside for positional points with his starting spot of 34th. A lot of luck is needed for a good finish at Daytona 500. If he can survive to the end, he has a good spot of paying back big-time dividends for your Daytona 500 DFS slate.

Erik Jones hasn’t been fast during Daytona Speedweeks. But he certainly knows his way around Daytona International Speedway. His first win came at the track in 2018, and he won the Busch Clash in 2020. His new team also fielded a fast car for Bubba Watson in previous years. Erik Jones starts 31st and has a high ceiling to score positional points. He’s a dark horse to win it all on Sunday.

While Cole Custer technically won the 2020 Rookie of the Year, it was Tyler Reddick who was the most impressive rookie last season. Reddick was surprisingly competitive and helped Richard Childress Racing to the revitalization of the program. While his two trips to Daytona didn’t breed all that much success, the team always seems to field fast cars at the Superspeedways. Reddick has a high ceiling for positional points by starting 29th on Sunday. He too is a Cinderella to win the race.

Roush Fenway Racing is a far cry from the dominance they showed in the 1990s and 2000s. But where they still shine are at the restrictor-plate races. Their strong engine and aerodynamic packages at these tracks allow them to still field fast cars. The Superspeedways have also been Chris Buescher‘s best tracks for both Roush and JTG Daugherty. It’s there where he owns a career average finish of 16.4 and always seems to be sniffing near the Top 10 at the end of each race. Buescher starts 22nd on Sunday, and any finish inside the Top 15 pays back his price and more on Sunday.