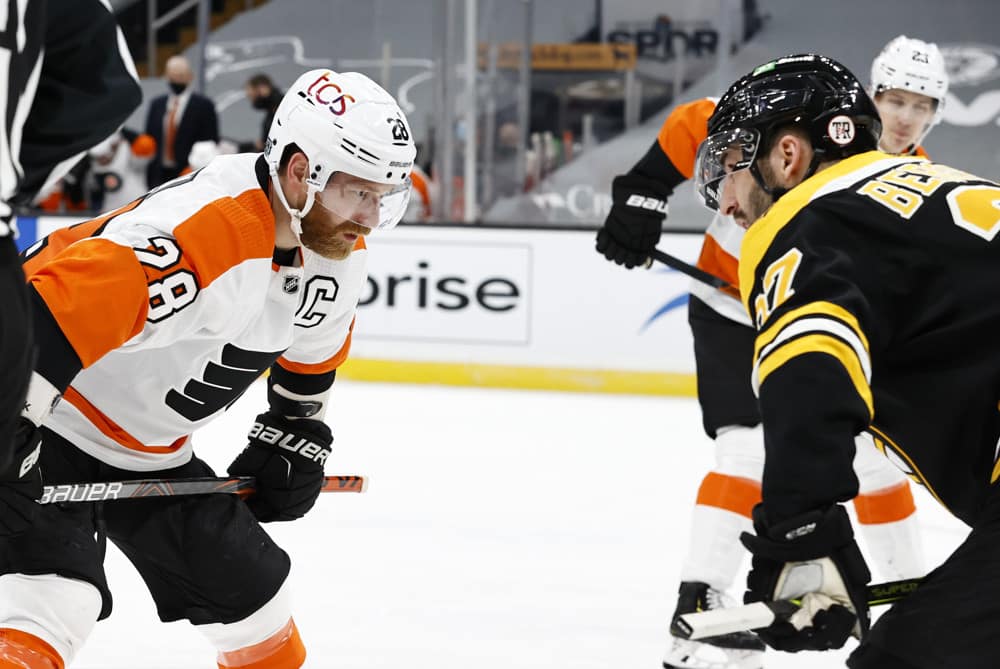 Wednesday Night Hockey is here again, and so are a pair of DraftKings NHL Showdown slates! The Super Bowl is still a few days away, so why not try your hand at some NHL?

First, the Tampa Bay Lightning will host the Detroit Red Wings at 5:30 p.m. EST. That will be followed up by the second (and final) game of the night when the Philadelphia Flyers host the Boston Bruins at 8:00 p.m. EST. You can check out last week’s picks here.

Both games will be nationally televised on NBCSN for a doubleheader, giving you all the more reason to put some money down on a few DraftKings Showdowns.

I’ll walk you through my strategy for making a single-entry lineup for each showdown, and give you some tips for larger-field tournaments along the way.

For this Showdown, you have to load up on the Lightning. Tampa Bay opened up as insane -315 favorites and the line has even moved to -330 in some places. You’re going to want to have at least four Lightning players in your lineup.

I’m going to use Point as the captain ($14,100) in this lineup. If you use Point at captain and still want the other three top players, you’re left with just $4,900 for your final two flex slots. That isn’t a whole lot. However, if you only want two or three of these big four, Point at captain will give you some salary relief elsewhere.

For my money, if I was going to take all three of Vasilevskiy, Stamkos, and Hedman with a captain Point, there are a few cheap flex options.

The original article recommended Mathias Brome ($2,000) as he was playing on Detroit’s top line, but he has since been optioned to the taxi squad.

Taro Hirose ($2,200) is expected to skate on Detroit’s second line. He hasn’t done much this season, but a cheap top-six forward has a chance to get a rebound goal or put some shots on net. Troy Stetcher ($2,000) doesn’t have a very high ceiling, but he’s averaging over a shot and blocked shot per game, giving him a floor of a few points.

Alternatively, you could add in a fifth Lightning player. Patrick Maroon ($2,000) is on the fourth line and second power-play unit, Luke Schenn ($2,000) can give you a few blocks, and if the Lightning get up big they could give some ice time to rookie Cal Foote ($2,000), who has one goal, four shots on goal, and one blocked shot in five games this season.

If you only want to have three of the Lightning’s big four, there is some value to be had in the mid-to-high range in this DraftKings NHL Showdown.

Ondrej Palat ($8,400) plays with Stamkos and Point and could be a sneaky option if you don’t take both of the big guns. Palat has goals in four of seven games this season, but he doesn’t bring a very high ceiling with a max of 15 points this season. He’s also hit or miss as he has 4.3, 1.3, and 3.0 points in the games he didn’t score in.

We’ll close out this slate by looking at a few players in the mid-range between $4,000 and $5,000. These will be useful if you put a top player at captain but don’t use all of Tampa’s big four.

Vladislav Namestnikov ($4,800) plays on Detroit’s second line and power-play unit. He has at least eight points in three of his last four games, but he laid a goose egg in the other game and didn’t do much in his first six games. He also previously played for the Lightning, perhaps adding some extra motivation.

Jan Rutta ($4,600) has a low ceiling but a decent floor. He plays on the top pair with Hedman and has at least 6.3 points in three of his last four games. Unfortunately, like Namestnikov, his other game was a zero.

So, given all of this, here is an example of a lineup that you could go with for this DraftKings NHL Showdown:

While the Lightning are heavy favorites in the first game, Bruins at Flyers could go either way. The Bruins swept the Flyers in a two-game set two weeks ago in Boston, but the Flyers have been playing better and now have home ice.

There is still a dominant top line to target in this game with David Pastrnak ($10,400), Patrice Bergeron ($10,000), and Brad Marchand ($9,400). All three members of the line are averaging at least 16 FPPG (granted, Pastrnak has only played in two games). Those three will be similar to Tampa’s big four for the first game. You’re going to want to have at least one or two of them in your lineup.

On the Flyers’ side of things, there may be some value to be found. Their highest skaters are priced at $9,000 (Kevin Hayes), and $8,600 (Ivan Provorov), giving Boston the top three skaters and four of the top six.

Let’s try to key in on a few Flyers players to mix in with the Bruins’ top line.

Giroux and Voracek have been playing on the same line centered by Nolan Patrick. I would think that the Flyers will try to match up that line with the Bergeron line. That should open things up for the Flyers’ middle six. Hayes centers Oskar Lindblom ($4,400) and Travis Konecny ($8,000), while JVR is on a line with Scott Laughton ($2,000), and Joel Farabee ($5,000).

Let’s start putting the lineup together for this DraftKings NHL Showdown.

There are a few bottom-tier options that I like for this game. One that I will most likely use was already mentioned: Scott Laughton. Laughton not only has the potential for a 9.3 or 16.5 point game (he has those in his last four games), but he has a decent floor with 4.1 or more in seven of 10 games this season. He also gives you some correlation with Hayes.

Two more Flyers at $2,000 are Nicolas Aube-Kubel and Philippe Myers. Aube-Kubel plays on a fourth line that sometimes gets a lot of playing time. They can forecheck and put pucks on net. Aube-Kubel has three points in 10 games this season. Given the pricing of his linemates ($3,800 and $3,400), I’ll take the value of $2,000 for Aube-Kubel.

Myers, on the other hand, is a second-pair defenseman that has played 23 minutes in each of his two games since returning from injury. He can create offense and will be on the ice a lot against the Bruins.

On Boston’s side, Trent Frederic ($2,000) is a guy to look at. He only has one point in nine games but will be playing on the third line with Charlie Coyle and on the second power-play unit. He had an assist and three shots on goal in one of the Bruins’ first two games against the Flyers.

Once again we have two Flyers and one Bruin.

The two Flyers are Oskar Lindblom ($4,600) and Joel Farabee ($5,000). Lindblom will likely be under-owned due to him cooling off after a hot start, while Farabee could be over-owned as he is coming off of his first career hat trick. Both play on the second power-play unit.

The only thing holding me back from Farabee is if you take JVR and Laughton, then you’d have the whole third line. Lindblom allows you to correlate with Hayes on the second line, while also giving you exposure to Konecny, who can create some offense.

The Bruin to look at is Brandon Carlo ($4,800). Carlo plays 19 minutes per game and that should only go up with the injuries on the blue line. He has a goal and assist in his last game for 17.8 points, and five blocked shots before that for 9.5 points.

If you have any questions, comments, or just want to talk some hockey, follow me on Twitter @RGilbertSOP!