Welcome back College Football fantasy fans. Week 10 was a DFS mess. In total, 10 games were either cancelled or postponed due to COVID. Additionally, several players including key QB’s (Hank Bachmeirer – Boise and Davis Mills – Stanford) missed their games due to contracting the virus. To make matters worse, this information was provided only minutes before kickoff, leaving many daily fantasy fans SOL.

After weeks like this, we should remind ourselves that at least we have a season, right? If the Big 10 and PAC-12 had their way, we wouldn’t. Much like our Marine’s motto, we will adapt and overcome.

Here are my top college football fantasy picks from the main DraftKings afternoon slate. Be sure to tune into our podcast The College Experience for Saturday night’s slate.

He might be a total chalk play and he’s the most expensive player in the afternoon slate, but he’s a guaranteed lock for production. Through Ohio State’s first three games, Fields is playing lights out. He’s averaging over 300 yards and 3 TD’s through the air with an insane 86.7 completion percentage. Plus, he’s ran for a couple of TD’s. He’s your Heisman front runner even if the Buckeyes have played fewer games than most.

Ohio State is a 25.5 favorite over Maryland this week in a game with an O/U of 73. The Terps, behind Tua’s little bro, have actually played well the last couple of weeks. While it’s hard to predict what Maryland will show up from week to week, they should have enough offense to force Ohio St to keep their foot on the gas.

Believe it or not, the Hoosiers are 3-0 and ranked #10 in the country. Much of their success is due to solid QB play from Pennix Jr. The sophomore is coming off a game vs Michigan where he threw for 342 and 3 TD’s.  That’s now back to back games with 3 TD’s through the air.

The Big 10 has been hard to predict this year, but it appears that Michigan St (IU’s opponent) is trash. Expect another nice outing from the Indiana offense which is beginning to fire on all cylinders.

Call this a hunch play. Jurkovec transferred to Boston College from Notre Dame after losing the QB battle to Ian Book. BC happens to play the Fighting Irish this week and I’m pretty sure Jurkovec will want to show that ND made a mistake letting him walk.

While I love the revenge angle here, the BC QB has also put together an impressive year. He averages over 260 passing yards per game and has chipped in with a handful of rushing scores. Notre Dame also just won their super bowl, beating Clemson last week. Did you see the on-field celebrations? Now they to go into a sleepy Chestnut Hill and face a boring Golden Eagle team. Perhaps a let-down is coming.

Knox may not be as well-known as other backs on bigger schools, but perhaps he should be. The clear-cut lead dog on an underrated Thundering Herd team, the junior running back has eclipsed the century mark in 5 straight games. He’s also scored 10 times this year and chips in catching a couple passes per game.

The Blue Raiders of MTSU come into Huntington struggling on defense, especially against the run. They’ve allowed almost 250 rushing yards per contest which includes a game vs North Texas where the Mean Green accumulated 462 yards on the ground (three players went over 100). This looks like a perfect matchup for Knox to go off big time. Take a look if you aren’t familiar. 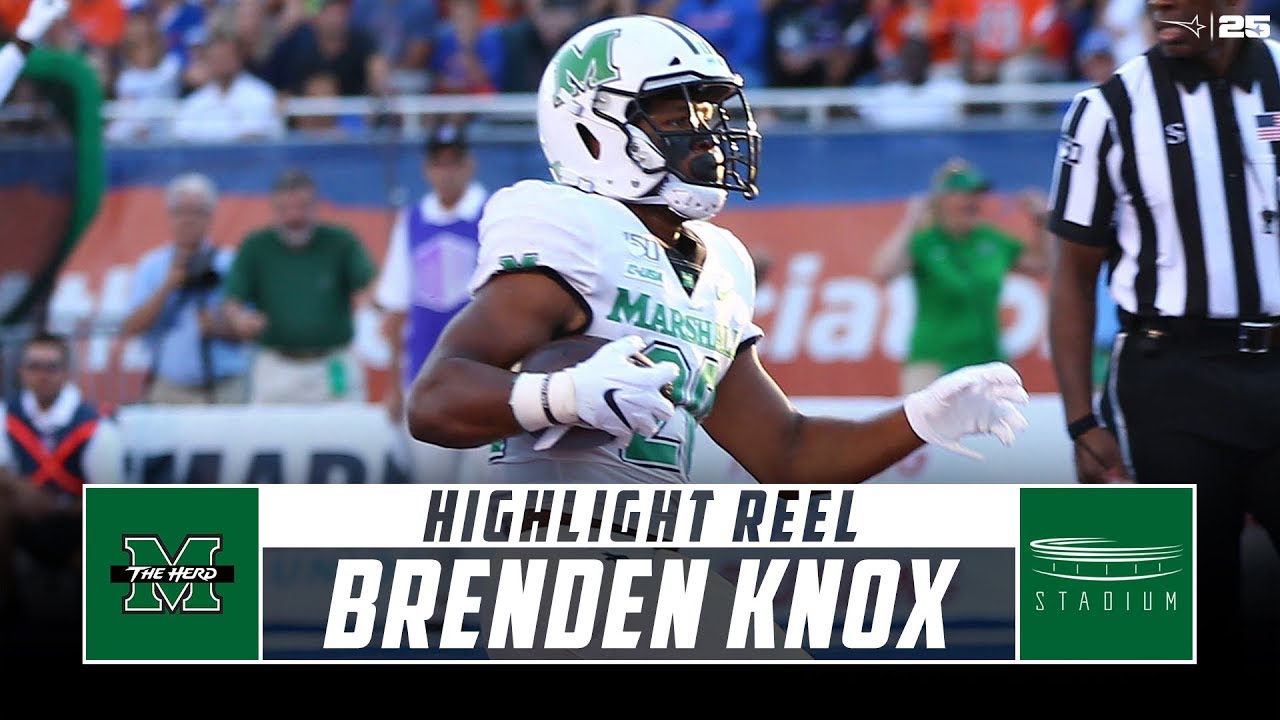 If it wasn’t for being overshadowed by the other running back in Chapel Hill (Javonte Williams – $9.5K), people would be singing Michael Carter’s praises. He only has 7 fewer carries and 34 fewer yards than Williams, albeit 10 fewer TD’s. I get it – Williams is a monster with an obvious nose for the endzone. However, Carter is still averaging over 100 rushing yards per game. Good luck finding another RB in this price range who provides the same consistent production.

Back to the same Wake/UNC game for our bottom of the barrel RB. Much like Michael Carter, Christian Beal-Smith has also been overshadowed by Wake’s leading rusher, Kenneth Walker ($7.4K). Walker is an outstanding running back but Beal-Smith has looked just as impressive at times including running for 129 yards vs VT and 130 yards vs Campbell.

On the season, Beal-Smith is averaging over 75 yards per game and I expect both RB’s for Wake to find room against this below average UNC D. For only $4.2K, I’m all in.

Chris Olave – Ohio State ($7,700)
If you happen to spend up on Justin Fields, you may want to stack him with one of the outstanding Buckeye wide receivers. You can’t go wrong with either but I’ll save $500 and go with the less expensive option. Garrett Wilson ($8.2K) has 6 more catches and 56 more yards on the season but Olave has scored two more TD’s.

As the red zone favorite for Fields, Olave now has back to back weeks with 2 TD’s. Expect him to find the end zone again against MD. Gimme Chris Olave as my top wideout.  Here he is putting in work:

In last week’s column, I highlighted USC-QB Kedon Slovis and mentioned USC-WR Amon-Ra St. Brown ($6.7K) in the weekly podcast. Both had nice games vs Arizona St and their price tags have expectedly increased. I still want pieces of the USC passing game and I can get Vaughns for a lot less.

Against Arizona last year, Vaughns caught 7 passes for 73 yards and a TD. As more of the possession receiver, I expect the senior wideout to be targeted often. It’s all about volume which should be plentiful.  A similar game to last year is within reach.

While PSU is struggling and currently winless, the passing game has still been getting its yards. A large portion of that passing attack is the big 6’5 TE from Merrimac, MA. Freiermuth is averaging over 5 catches and 65 yards per game. He’s only found the end zone once in Penn State’s first game against Indiana, so he’s due.

I expect the Nittany Lion offense to kick things into gear against Nebraska this weekend and get their first W of the year. Grabbing their TE at only 4.6K is a nice way to save $ while still getting steady production.