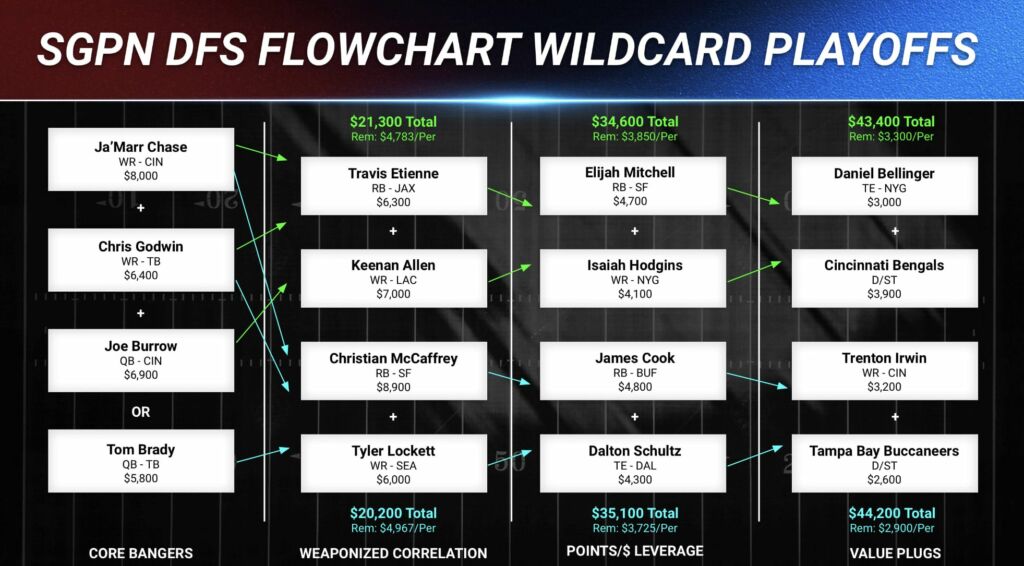 Week 18 was a lackluster effort on my part. A few smart lineups brought an otherwise underwhelming investment into break-even territory. The NFL Playoffs are here! The Wildcard DFS Flowchart will cover players from all six games in the round, ranging from Saturday to Monday night.

I feel much more comfortable finding leverage values on constricted slates. I was easily more profitable in Showdown and in the throes of bye-week hell.

The Wildcard round provides a couple of games between division rivals who will see one another for the third time this season. This will aid in pattern recognition and mismatches of which to take advantage.

The Wildcard DFS Flowchart is a visual representation of my lineup-building thought process. It is condensed into two diverging paths for the sake of digestibility and protecting you all from knowing just how incredibly loony I am. Here are some of my core thoughts for the combined six-game Wildcard slate on DraftKings.

We need not worry about QB chalk on this slate, for there are just too many great options. I look to Joe Burrow to continue his dominion over an outmatched Ravens secondary. Pairing him with Ja’Marr Chase and/or Tee Higgins is sure to pay off, especially on a slate this narrow.

Tom Brady in the playoffs? Don’t bet against him. Add in a stellar matchup with a tattered Cowboys secondary, and it’s hard to imagine fate having it any other way than the Bucs sending Jerry’s boys home for the winter.

Brady has never lost to Dallas in his career, while Dallas seems to be unceremoniously shown the curtains every January. Dallas will have trouble keeping tabs on both Mike Evans and Chris Godwin in this one. I prefer the guy ruling the slot against a very suspect cast of characters filling in for injured starters.

The Path of Least Resistance

The top RBs on this slate will be a bit challenging to build around, especially if opting for a premium QB/WR stack. Christian McCaffrey is privileged to see Seattle another time.

He torched them for 28.6 DraftKings points in Week 15. In fact, the Seahawks are 29th at defending the RB position this season. Travis Etienne faces a similar matchup with the Chargers, who are 27th versus RBs. He has been a big play dynamo all season, and this game certainly has shootout potential.

It’s almost an involuntary reflex to plug in Keenan Allen these days. Since returning from his hamstring injury, Allen has earned an obscene target share, including three separate games with 14 targets. Jacksonville isn’t too much of a slouch on the outside but will have their hands full in the slot.

Herbert and Allen share a telepathic connection on a variety of option routes to keep the chains moving and throwing points on the board. Tyler Lockett seems to be the only Seahawks weapon who can score fantasy points against the 49ers.

He put up 22.7 in Santa Clara in Week 2, followed by 13.8 in a 21-13 home loss in Week 15. His job will be to press the seam and exploit San Francisco’s overly aggressive-linebackers and safeties. 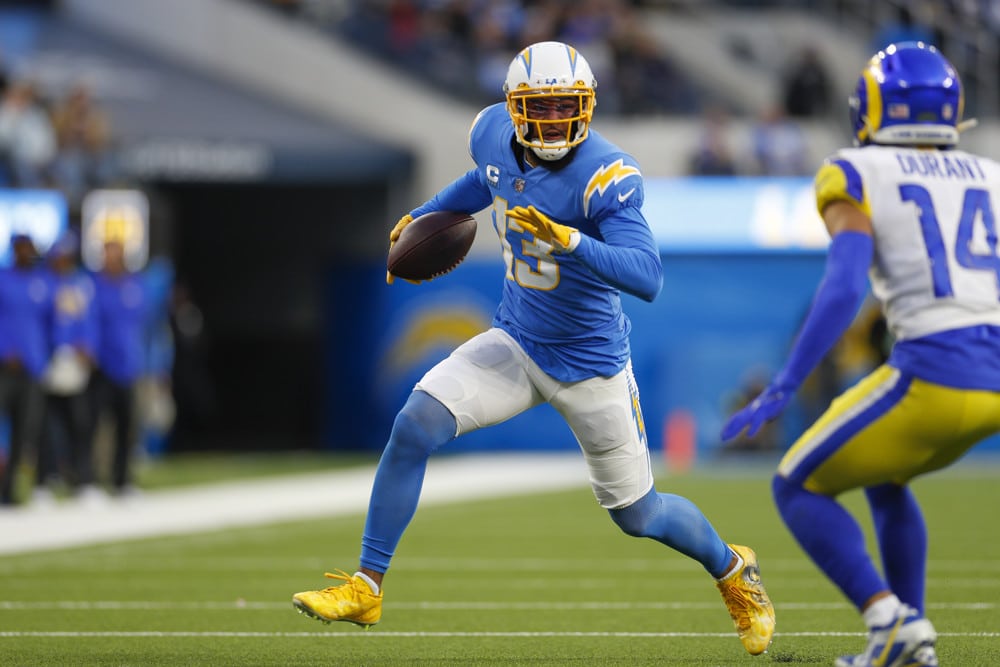 The value plays this week are also dripping in cash-winning leverage on the field. If you can’t build around CMC, Elijah Mitchell is going to see plenty of volume to pay off at $4.7k.

He scored twice in his first game back from a knee injury last week and will rotate in pretty regularly for the 49ers. James Cook is a bit chalky, but his role in the Bills’ offense is tantalizing against a porous Dolphins defense. Cook will also benefit from a game script that is very likely to be positive for Buffalo.

Isaiah Hodgins is somehow projected to be less chalky than his teammate Richie James Jr, even though it was Hodgins who had his best game of the season against the Vikings in Week 16 with 22.9 DraftKings points.

I will have a good amount of exposure to each of them; their values are simply too good against a putrid Minnesota secondary. Dalton Schultz is the second-favorite target for Dak Prescott and will offer plenty of value down at $4.3k, especially if Tampa Bay forces Dallas to play from behind.

Where chalk is the heaviest, look for the sneakiest players within the same game who can spoil the parade for the lemmings. I found myself plugging in Daniel Bellinger a lot to get away from James and Hodgins.

Darius Slayton is also getting a touch less attention than his teammates, so he will see the player pool with decent exposure. Trenton Irwin has been a revelation for the Bengals down the stretch.

Burrow likes when Cincinnati spreads it out with four-wide and can force the defense to show their coverage intentions for Chase and Higgins. Irwin has scored all four of his touchdowns this season in his last seven games and narrowly missed another last week against these same Ravens.

I think the Bengals easily have the best defensive matchup on the entire slate, but the price to roster them might preclude them from the heavy chalk they deserve. Lamar Jackson is out, while Tyler Huntley has been nursing a shoulder strain for weeks and is headed for a game-time decision. Even if he starts, shoulder injuries are easy to aggravate.

This would leave Baltimore to try and keep their season alive with undrafted rookie Anthony Brown, who has shown zero flashes of adequate QB play. Remember, the Bengals just score 19.0 DraftKings points last week in the same matchup.

The Buccaneers are my other choice for DST. This is due to a lower salary and the recent propensity for Dak Prescott and the Cowboys to frequently turn the ball over.