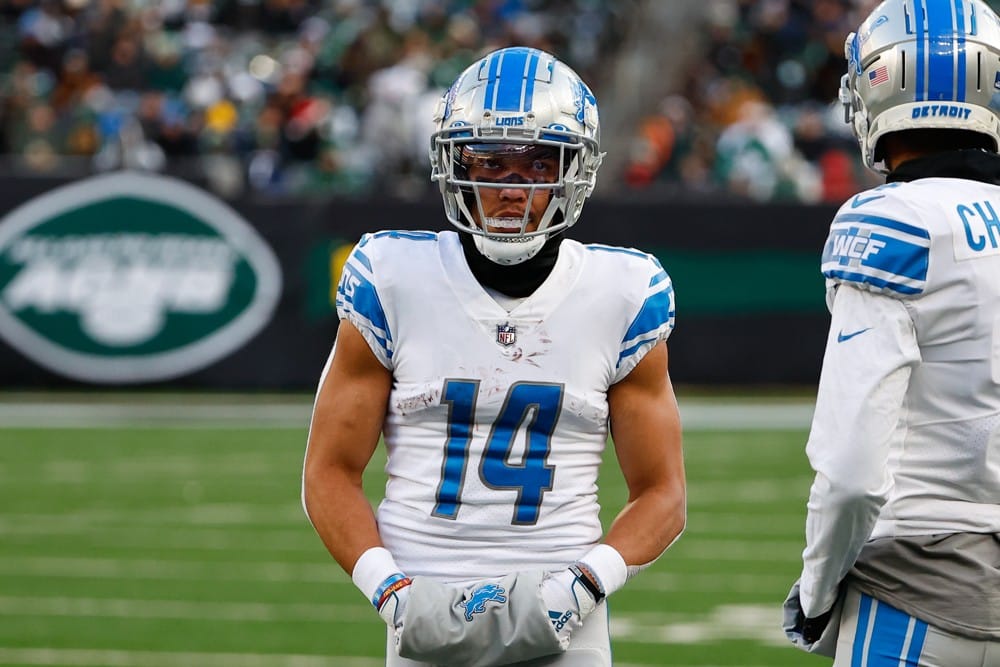 Some of you also play season long fantasy football and it’s championship week. Every week is championship week for DFS degenerates like myself though. Week 17 offers up a relatively expanded 13-game main slate, posing us with a true challenge to optimize the best lineups under the cap.

Last week was another banger for the SGPN crew. I hope you loaded up on DeVonta Smith and Isaiah Hodgins with immense success like I did. That was a constricted 10-game slate, where leverage is paramount. On an expanded slate like the one this Sunday, we are more hell-bent on finding the optimal plays. This simply means that the old-fashioned points-per-dollar plays will be the focus since chalky players will represent a less concentrated ownership percentage. Conversely, identifying the best plays is more challenging with more players available on the slate.

The Week 17 NFL Flowchart is a visual representation of my lineup-building thought process. It is condensed into two diverging paths for the sake of digestibility and protecting you all from knowing just how incredibly loony I am. Here are some of my core thoughts for Week 17 on DraftKings. 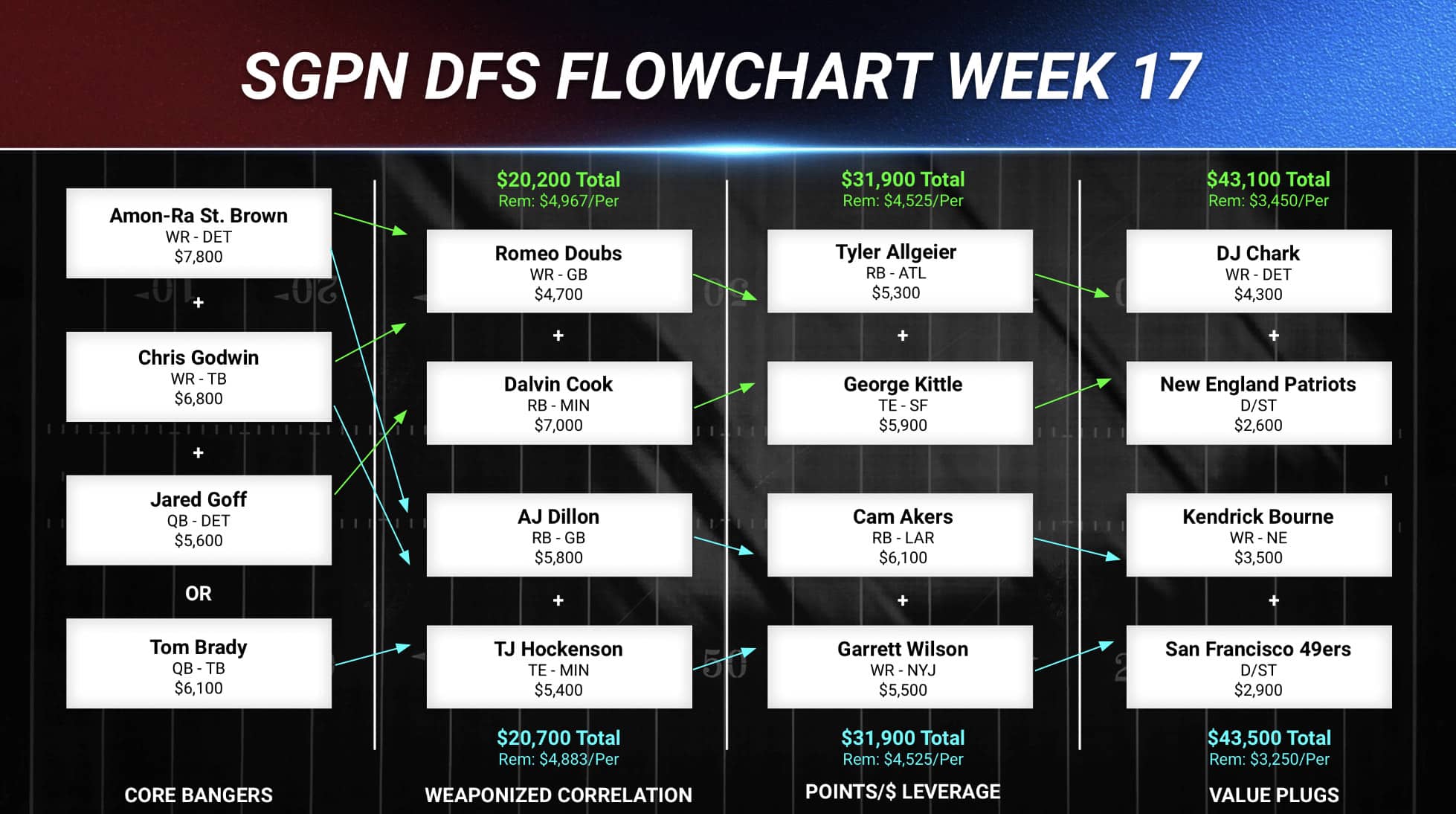 Sunday falls on January 1, 2023. It is a new year and yet another Sunday morning on the West Coast after staying up way past my bedtime. The Bears and Lions played to a 31-30 finish at Soldier Field earlier in the season and now the rematch is in the climate-controlled confines of Ford Field in Detroit. Jared Goff and Justin Fields have both been fantasy league-winning QBs this season at cost.

The respective defenses are both abysmal, setting us up for another high-total game that begs us to stack it. I’m head over heels in love with Amon-Ra St. Brown’s matchup against the Chicago secondary, against whom he already put up a 20+ performance this season.

It’s officially the time of year when Tom Brady flips the switch and rarely loses football games. The Panthers and Buccaneers are duking it out for the unenviable title of NFC South champions. Carolina is without star CB Jaycee Horn, leaving them severely hampered in coverage. Chris Godwin is quietly having another strong season and is priced well below players with similar projections in my model. He’s a lock for me this week.

The sheer number of playable RBs on this slate is staggering. Most of them are priced under $6k, leaving plenty of salary to attack the slate with stud WRs. I hate to say it, but I think it’s very likely that the best lineups will have a third RB in the flex. Take this for what it is: a sign that this slate will have massive disparity and you should have as many RBs in your pool as possible. I’ll be taking my shots with a narrow look at every other position.

Saquon Barkley and Dalvin Cook are the only expensive RBs I’ll be playing, while I use the buckshot approach with the rest. AJ Dillon and Tyler Allgeier will be my most heavily-used players since they both popped up with top-10 upside this past week.

The Law of Natural Selection

I mentioned that my receiver pool was heavily condensed. At this pivotal point in the regular season, there is valuable clarity in who QBs prefer to target. Follow the volume and try to avoid muddy situations if you can help it.

TJ Hockenson is right behind Justin Jefferson when Kirk Cousins slings it around the yard trying to overcome Minnesota’s horrendous defense.

Mike White loves Garrett Wilson and will funnel a lot of volume his way.

Christian Watson is the flashy freak athlete, but Romeo Doubs has been the more consistent (and trustworthy) Packers WR for Aaron Rodgers when healthy.

Kendrick Bourne saw double-digit targets last week from Mac Jones and the matchup with Miami this week is magnificent.

George Kittle is an elite receiving TE for any QB not named Jimmy Garoppolo. His upside relative to his salary is the best of any player on this slate with Brock Purdy under center.

The one position that stands to be easier to optimize this week is DST. The 49ers are inexplicably $1k cheaper than last week. Then the Raiders parted ways with Derek Carr in favor of the putrid Jarrett Stidham. It’s a play so obvious that the current 15% ownership projection is utterly shocking. Don’t fade the 49ers, just limit your exposure if that projection starts to climb.

The New England Patriots DST is another smash play on this slate. They average more than 11 fantasy points per game and will get to harass Teddy Bridgewater with Tua Tagovailoa back in concussion protocol. DFS doesn’t have to be difficult. This week is shaping up to be a big moneymaker for managers who play good chalk and throw in a unique wrinkle or two to separate them from the pack.

Thanks for checking out this Week 17 NFL flowchart presented by the Sports Gambling Podcast Network. Check back with SGPN daily for more DFS and fantasy football content.