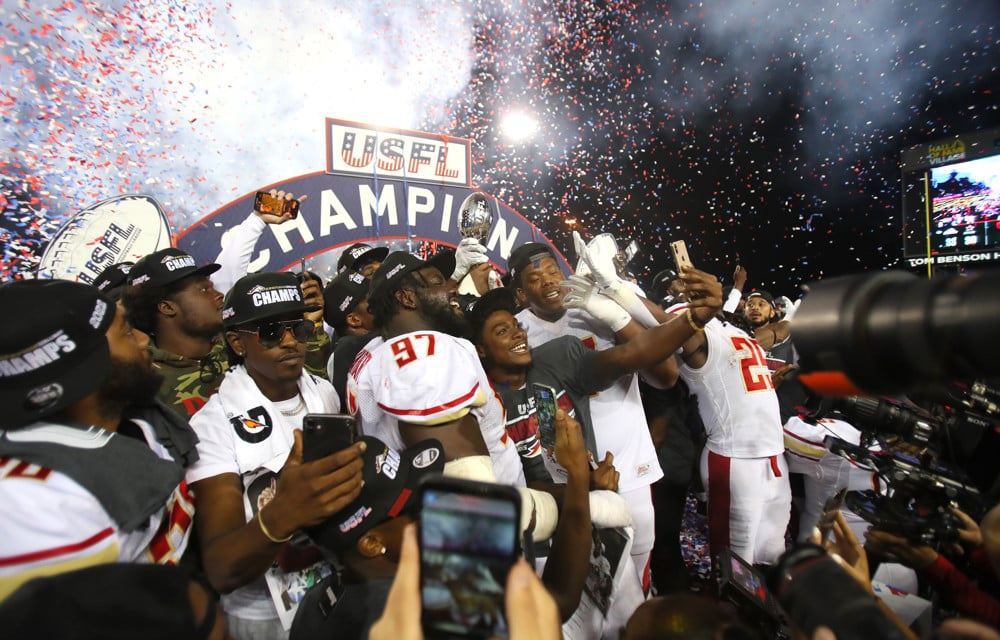 If you love spring football then 2022 must feel like a fever dream. The inaugural season of the USFL rebirth was a success in 2022 and the XFL is officially back. The XFL spent 2022 choosing cities and team names, hiring coaches, and drafting players. We now have two spring football leagues to look forward to in 2023 and both seem to be set up for success this season and for years going forward. With more football comes more gambling and if you are reading this article, you are likely interested in both. First, let’s look at what both the XFL and USFL will offer during their respective 2023 seasons. More importantly. Let’s look at the early best bets of spring football before the USFL and XFL kick off their 2023 seasons.

The USFL managed to produce an excellent product and an enjoyable football experience in 2022. The USFL was able to complete a full season and the Birmingham Stallions were crowned champion after beating the Philadelphia Stars on July 3rd by a score of 33 to 30. The game drew about 1.52 million television viewers and approximately 20,000 fans were in attendance in Canton, Ohio. The USFL will return in 2023 with 8 teams including the newly rebranded Memphis Showboats (goodbye Bandits we hardly knew you) and at least two hub cities including Birmingham Alabama and Memphis Tennessee. The 2023 USFL season will kick off on Sunday, April 16th.

The XFL is also back under the leadership group led by Dwayne “The Rock” Johnson. After COVID shut the 2020 XFL rebirth short, the XFL was purchased and rebooted by the Rock’s group with a goal to kick off the rebooted league in 2023. The XFL will head into 2023 with 8 teams, many of which are back from 2020. Unlike the USFL, the XFL will have a home city and stadium for each of the 8 teams. This may give the XFL a slight advantage over the USFL in the attendance department as the USFL continues to utilize the hub city format. The XFL will kick off on Saturday, February 18th.

Will the XFL complete the full 2023 season?

Though it may not be the fun or most potentially lucrative answer, the smart money here is betting on the XFL to finish its 2023 season. The third iteration of the XFL is led by a strong and financially stable ownership group. This group is led by Dwayne Johnson and his ex-wife (and business partner) Danny Garcia. Funding should not be an issue for the XFL. The 2020 version of the XFL was praised as a good product and drew solid television ratings. If not for an unprecedented pandemic, the XFL likely would have completed its entire 2020 season. This bodes well for the 2023 version of the XFL, as fans of the 2020 product will likely be tuning in and attending games. The star power of Dwayne Johnson could also bring new fans to the game that may not have been interested otherwise.

Great news for #XFL fans: The unique kickoff format is back for 2023!

This was one of my favorite innovations from the XFL in 2020. Allows for plenty of returns, while reducing potential injuries. Excited to see this style on the field once again.pic.twitter.com/r0eePpJmI3

Which league will have the most TV viewers for their 2023 Week 1 game?

The XFL feels like a safe bet to draw more viewers in Week 1. ESPN and ABC will be broadcasting XFL games in 2023 while the USFL will be available on FOX Sports and NBC. Maybe I am overthinking it, but having games aired on ESPN (one of the largest homes of sports entertainment on the planet) feels like a huge viewership advantage for the XFL. In 2020, the XFL averaged 2.9 million viewers on ESPN and ABC during its kickoff weekend. The USFL peaked at 1.8 million viewers on FOX for the championship game in 2022 showing a strong interest by the time the season ended. The XFL will also be kicking off two full months before the USFL. With the combination of historical interest in the XFL and a renewed interest in the product thanks to Dwayne Johnson, the XFL will safely outpace the USFL in Week 1.

Why doesn’t Luis Perez have a job in NFL yet? pic.twitter.com/3K5k8Urth9

The Generals and Stallions are now tied at 14

Which league will have the most TV viewers for their 2023 championship game?

I am putting my money on the USFL to have more viewers for its championship game. The USFL finished strong in 2022 when its peak viewership reached 1.8 million viewers. This is encouraging as it means the interest in the USFL did not disappear by the season’s end. I also think the USFL returning for a second season and proving it can be a successful and strong product will lead to fandom expansion as the season goes on. Lastly, and this might be a reach on my part, I think the existence of the XFL will actually help the USFL. Let me explain. The 2023 XFL season will be starting and wrapping up before the 2023 USFL season. Assuming the XFL season is a success, I think spring football fans will come out in droves to watch the USFL championship to enjoy the last bit of spring football before 2024.

The Vipers are not currently favored to win the XFL championship. As a matter of fact, there are exactly in the middle of the pack with odds at +450. I really like these odds for a roster loaded with elite skill positions and former NFL talent. The Vipers are going to be led by first-time head coach Rod Woodson. Woodson had an illustrious 17-year NFL career and is a member of the Pro football hall of fame. He will be a defensive-minded head coach and will boast probably the best defensive player on an XFL roster with edge rusher Vic Beasley. Beasley is a former first-round pick and pro bowler in the NFL and he led the NFL in sacks with 15.5 in 2016.

🚨 Vic Beasley off the edge for the strip sack!!! 🚨 pic.twitter.com/RAJEoMbO8e

Do not sleep on this Viper’s offense. Their offense is led by former USFL and NFL studs. Luis Perez looks to be the man under center for the Vipers. Last season, he was the leading passer of the New Jersey Generals in the USFL. He threw for 1,200 yards, 9 touchdowns, and only 1 interception. He is not very mobile but as an efficient pocket passer, the offense will keep the chains moving. Perez is going to be supported by former NFL standouts Martavis Bryant and Matt Jones. Both Bryant and Jones but looked to have bright NFL futures before injuries and legal troubles derailed both of their careers. Jones is a bruising power back capable of being the offense’s every-down bell cow. Bryant is a big play threat who scored 8 touchdowns in his rookie season in the NFL alone.

If you want to go chalk, I do not blame you. The Battlehwaks are currently favored to win the championship in 2023. They are being led by former NFL tight Anthony Becht. They will also have former NFL quarterback AJ McCarron under center. Having a season former NFL QB leading your team is a huge advantage in spring football leagues. McCarron will also be throwing to the likes of receivers like Austin Proehl who has experience in the XFL and NFL. Darrius Shepherd will also be joining the receiving group having just played for the New Jersey Generals in the USFL and having spent time on several NFL rosters.

If you are interested in betting a long shot, I do not hate the idea of throwing a little action at the Houston Roughnecks. The biggest I like the Roughnecks is they are led by an experienced head coach. Wade Phillips has been around football a long time. Wade Phillips won the super bowl as the defensive coordinator of the Denver Broncos in 2015. That team was known for having a stout defensive unit so the roughnecks will be ready to play on defense. Brandon Silvers will likely be under center for this offense. He does not have a super decorated career but was the starting quarterback for the Seattle Seadragons in 2020. Having previous XFL experience could prove to be valuable and lead to an overachieving unit in 2023.

The first TD from the new XFL 🙌 pic.twitter.com/g99Kp5Gi8b

The Generals and Stallions are both currently tied as co-favorites to win the USFL championship in 2023. The Generals fell short in the playoffs while the Stallions went on to win it all. I give the slight edge to the Generals here for a few reasons. It is incredibly hard for teams to repeat as champions in any league. In addition, the Stallions lost a lot of star power to NFL rosters with Victor Bolden, Jr. joining the Arizona Cardinals and Osirus Mitchell joining the Green Bay Packers. Bolden was the USFL championship game MVP so his presence will be sorely missed. The Generals lost Luis Perez to the XFL and Kavontae Turpin is currently the return specialist for the Dallas Cowboys. The league MVP will be hard to replace but the Generals are returning a talented roster. DeAndre Johnson proved he could lead an offense successfully on his own.

THE MVP WITH THE GO-AHEAD TOUCHDOWN ‼️🏆

What a run by @KaVontaeTurpin

The Stars were less dominant during the 2022 USFL season but finished and continued to ride a hot streak through the USFL playoffs. The Stars knocked off the red-hot Generals on their way to a championship loss to the Stallions. Even though the Stars lost Bryan Scott to injury, Case Cookus filled in admirably and almost led the Stars to an improbable championship. The future of Bryan Scott is uncertain and Case Cookus is currently on an NFL roster. The Stars added Kevin Thomson to the QB room who has CFL experience. If the Stars manage to stabilize the QB room, they will be returning a high-powered offense and a talented roster to the USFL in 2023. Keep an eye on the Stars to take the next step in 2023.

Make sure you check SGPN regularly for updates on all things XFL and USFL.

Returning USFL Players With Big Fantasy Value in 2023
Top XFL Training Camp Battles: Who To Watch And Who Will Win