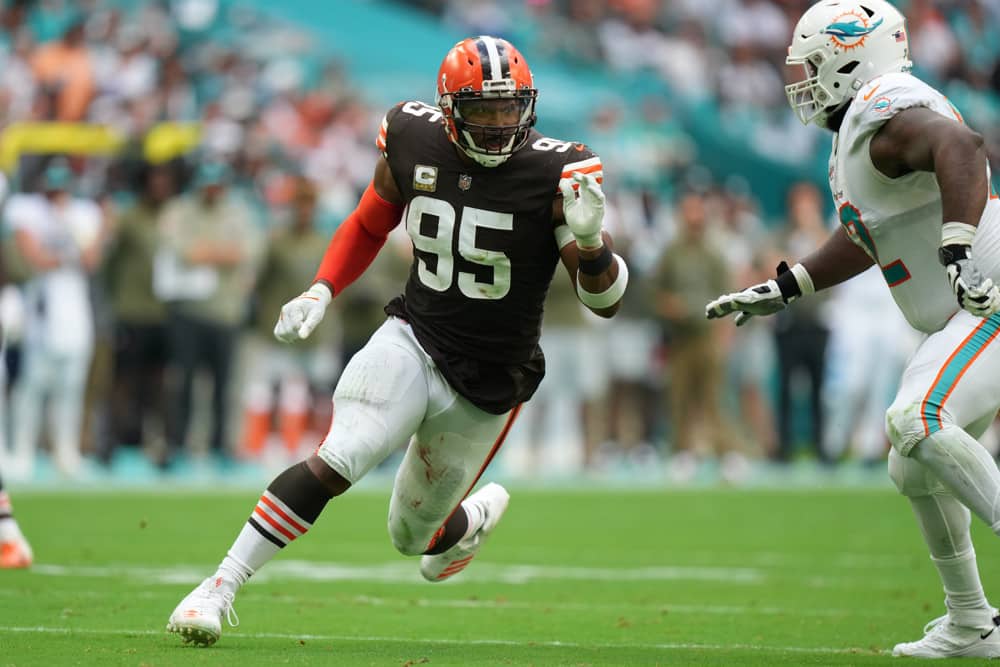 Everybody loves betting on a dog. Not only is it always fun to root for the underdog, but it pays better when you bet it as well. One of the most unlikely dogs, the Rams, made a comeback win over the Raiders on Thursday night. And if the Rams can win with Baker, who had been on the team just a couple of days, anybody can win! As we look at all the matchups, what other teams have a chance to pull off the upset and make you some plus money?

And while the Vikings look like the easiest dog to bet on this week, that game just feels so much like a trap from the books that I’m staying away from it. Let’s take a look at the NFL Week 14 Moneyline dogs that might be worth sprinkling some money on.

Don’t look now, but Tom Brady, the Buccaneers have won three of the last four, including a recent come-from-behind victory last week in the last seconds. And even though their defense hasn’t been as elite as last year, they are still a very good defense. Now they move on to the San Francisco 49ers, where they will face Mr. Irrelevant Brock Purdy in his first career start. Look for the Buccaneers to focus everything on stopping the run and forcing Brock Purdy to beat them in the passing game.

The Bucs have a lot of momentum coming into this game, while the 49ers have the nerves of prepping with their third starting quarterback of the year. Yes, the 49ers will likely lean on the shoulders of Christian McCaffrey, but if Tom Brady can push the Bucs ahead early on, the game will rely on the shoulders of rookie Brock Purdy. The Bucs have also played very well on the road in December, going 10-4-1 against the spread in the last 15. While the 49ers are a good team, this is a bad spot for them, and the Bucs are one of my favorite NFL Week 14 Moneyline dogs to bet.

The New England Patriots hit the road against the Arizona Cardinals on Monday night. It’s a tough spot for the Patriots, who lost on the road to the Vikings two weeks ago and at home against Buffalo last week. The last two games were very physical games. Meanwhile, the Cardinals are coming off of a bye week and should be refreshed with two full weeks to prepare. Both of these teams could theoretically make the playoffs. Not to mention at this point of the season, being the more rested team goes a long way.

And while the Cardinals have not been good on Monday nights the past ten games, the Patriots have struggled in primetime as well. I’m sure they don’t need to be reminded that in their last Monday night game, they lost 33-14 to the Chicago Bears. The Cardinals are the fresher team which makes them one of the NFL Week 14 Moneyline dogs that I like.

The Cincinnati Bengals have been one of the hottest teams in football the past handful of weeks, including an upset win over the Chiefs last week. Coming off a big-moment win against the Chiefs likely took some out of the Bengals and sets them up for a let-down week. But that’s not the only thing the Bengals have going against them.

As good as Joe Burrow and the Bengals are against the Chiefs, they’re equally bad against the Browns, losing the last five games. While all trends come to an end, there’s reason to believe this trend keeps going as the Browns have had their number.

The Browns won somehow last week despite a poor showing from their offense. However, with the rust now shaken off, Deshaun Watson will look to show Cleveland fans why he wasn’t only worth all that money but also worth the wait. The Browns match up well against the Bengals due to their strong pass defense to limit Burrow and their strong rushing offense to move the ball fluidly down the field.

Watson will look for some magic to help the Browns continue their streak of upsetting the Bengals. And at +220, the Browns are sneaky good NFL Week 14 Moneyline dogs that could win you some cash.

Alright, so this one is the biggest stretch out of all the NFL Week 14 Moneyline dogs. However, I couldn’t just keep giving out these small dogs. Sometimes you have to take a chance on the big money. The best thing is, with a +1100 payout, you don’t even have to bet big to win big.

And yes, it’s a long shot, but that’s what would make it so juicy if it hits. The Cowboys are coming off three wins in a row, including a huge win against the Colts in a game that was 21-19 going into the fourth quarter. However, the Cowboys ended up scoring 33 fourth-quarter points as the Colts broke down. After such a big win and going against a less-talented Texans team could see the Cowboys just going through the motions.

The Texans season is over and has been for a while. But that doesn’t mean they don’t have something to play for. What better way to add some positivity to your season than with a win against your in-state opponent? The last time these two faced off was in 2018.

The Texans won the game 19-16. If they can limit the Cowboys and catch them just going through the motions, it’s possible they can put some pressure on at the end and steal a win. While it may not be likely, it isn’t impossible.

As Josh Allen goes, the Buffalo Bills’ offense goes. Allen should be fired up for this game after they lost earlier in the year against the Jets. Look for him to put the Bills on his back once again and score the first touchdown for them, setting the tone for what I expect to be a routing. If the first touchdown makes you nervous, you can also get Josh Allen anytime touchdown at +125.

Despite throwing out the Texans to win, I am grabbing some insurance in the event they don’t put off a miracle upset. The Texans happen to be the worst rushing defense in the league, allowing the most rushing yards per game.

Even though Tony Pollard has looked great all year, oftentimes, when the Cowboys get close and inside the ten yard-line, you’ll see Ezekiel Elliott get those carries. I like Elliott to have a big day and score two touchdowns.