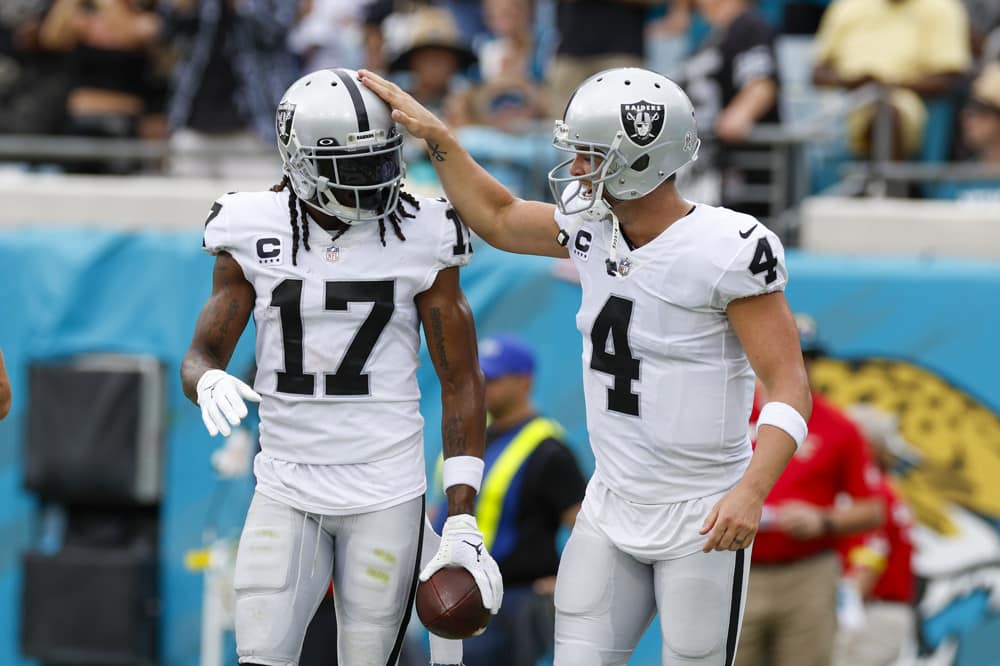 We can describe the seasons of both teams as disappointing, but regardless they get the opportunity to play under the lights in primetime, and we’re here to break them down. Let’s dig into the best recent trends to make sense of this fresh Thursday Night matchup.

The spread for this matchup is currently -6.5 in favor of the Las Vegas Raiders. WynnBet is paying -110 odds for both teams to cover the 6.5 points. Right now 82% of the public is weighing in favor of the Raiders to cover the spread. I agree with the pick, but it has nothing to do with the public. While the Raiders are 5-7 SU they are 6-6 ATS and have won and covered three games in a row. They’ve recently beaten the Chargers, Seahawks, and Broncos.

The Raiders have covered 7 points as both favorite and underdog at least once this season. This was in back-to-back weeks playing against the Chiefs and the Texans. The Rams enter this matchup on a six-game losing streak. They covered the spread last week against the Seahawks, however, the Rams have yet to cover back-to-back games this season.

The Rams are 1-4-1 in their last six games playing as underdogs. They’re not favored in this game for a reason. The offense is a mess and ridden with injuries and the defense has allowed 400+ yards in back-to-back weeks. The Raiders -6.5 is the pick to make on Thursday Night. I’m sensing they can win this game by 10-14 points at minimum.

Well, you’re already in the know as to where I’m going with my money line pick, but let’s break down the numbers to get a clearer idea of why you might want to toss the Raiders ML in a few parlays. WynnBet is offering -280 odds for the Raiders to win outright while the Rams are +230 underdogs.

As I mentioned the Rams have allowed 400+ yards on defense in back-to-back weeks. They won’t get a reprieve in their matchup on Thursday Night. The Raiders have reached 400+ yards on offense in their three straight wins and have hit this feat in four of their last seven games.

The spark in the Raiders’ offense is clearly Josh Jacobs as he’s established a real running game for Las Vegas. He’s amassed a massive total of 719 all-purpose yards and four touchdowns across his past four starts. The Rams have allowed at least 75+ rushing yards in four straight games; the Raiders will own the clock running the ball. It’s hard to bet the Rams to win when they’ve failed to do so in six straight weeks while their opponent is surging.

The total on Wynnbet for Thursday Night Football is 43.5 points. Despite their woes on offense, the over has cashed in four out of the Rams’ last six games. It certainly helps with the way their defense is playing.

Conversely, the Raiders cashed the under in four of their last six, but they are 6-5-1 to the over on the year. The total of the two teams’ average points allowed comes to 48 points. The Raiders average 25 points against while the Rams average 23 points against. Both teams rank in the bottom half of the league for points allowed.

My only concern about taking the over is that the Rams won’t play their part in scoring points. Particularly if they don’t score early in this game, they rank 31st in the NFL in fourth-quarter scoring. However, they rank 29th in points allowed in the fourth quarter; we could see some extra garbage time scoring for the Raiders. I’ll take the Over here, I believe we can get a 27-17 game at minimum to push us over the finish line.

Josh Jacobs will be a big fan favorite to cash the anytime touchdown tickets on Thursday Night Football. I’m rolling with him on his streak of impeccable production. The Rams have allowed just six rushing touchdowns to RBs this season, however, they have yet to compile back-to-back games with zero rushing touchdowns allowed.

They allowed zero rushing touchdowns last week to Seattle, and I’m betting for the trend to come back around for Josh Jacobs in week 14. He’s getting +400 odds to score the game’s first TD as well, that’s certainly a good place to start when hedging the first TNF TD scored.

Van Jefferson has scored a touchdown in every other game since returning to the lineup. This week falls on his turn to score, not trying to keep it simple as that but it is a pattern to follow. He scored a touchdown in week 10 with John Wolford at QB, and Wolford should be under center Thursday Night for the Rams.

The two connected on a 3-yard pass play, so he’s just as live in the Red Zone as Cam Akers who’s coming off a two-touchdown game. I expect the team to have to throw a lot and Van Jefferson is the team’s pseudo-number-one receiver with Cooper Kupp and Allen Robinson going down with injuries. I like the odds I’m getting at +340 given the anticipated positive game flow from the poor defense on both sides.

This is the swing-for-the-fence approach to Thursday Night Football props. Adams has cleared this receiving total in four of his last five games and has multiple touchdowns in three of those games. The Rams rank 6th in total touchdowns allowed to wide receivers.

They also allowed three passing touchdowns in week 13. I’ve laid out the plan of attack on the Raiders ML Pick. A big game from Adams on top of an easier matchup feels safer than most weeks. A $25 bet on this Same Game Parlay at Wynnbet pays $200.

The odds and likelihood for a payout are certainly more likely here, and I like the recent looks from both players involved. While the production for Mack Hollins is inconsistent, he has hit this total in two of his last three games and has been targeted at least 9 times in two of the last three starts.

Akers led the Rams in touches last week and that feels like a safe play again this week. He had 17 carries for 60 rushing yards in week 13 and he went over the total in week 11 when he had double-digit carries. That seems like the formula to hit the number and I think we can trust that trend to follow into week 14 as the Rams QBs are beaten up at the moment.