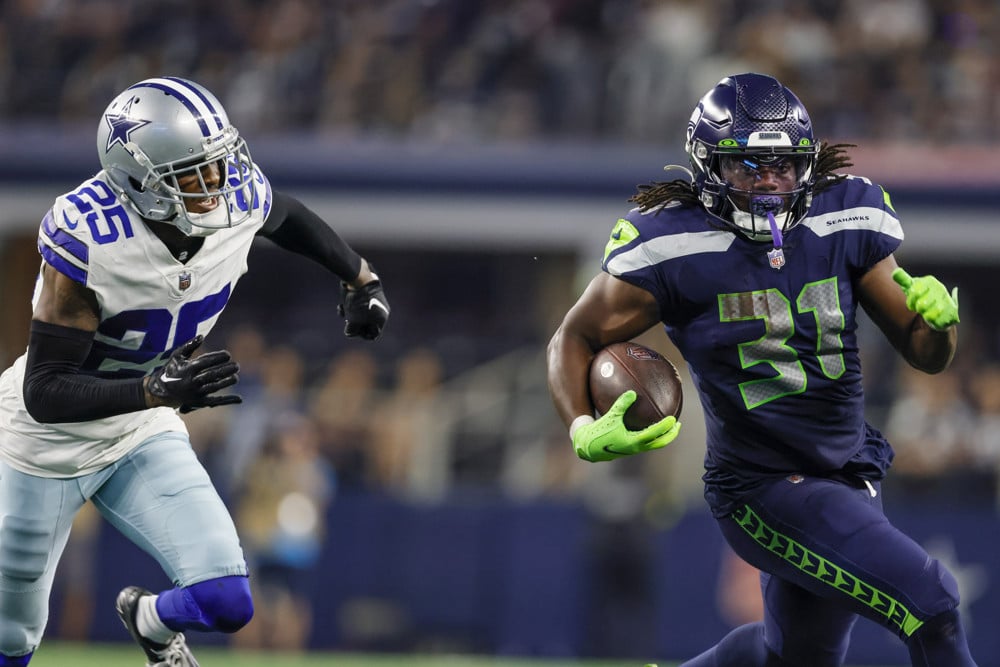 The SGPN Early Week 14 Waiver Wire Targets article is here with the instant reactions to key waiver wire opportunities for the final week of the fantasy football regular season. There were a few surprises and injuries in week 13 that should offer some low-key players the opportunity to play fantasy football hero in week 14. We’ll review the best options on the waiver wire based on their upcoming matchups and roles in their offense.

Tyler Huntley appears to be the likely starter for the Baltimore Ravens this upcoming week. Lamar Jackson suffered a knee injury in week 13. The return timeline was described as days to weeks; not sure if they can be any more vague. Regardless, Huntley filled in nicely for Lamar and earned the victory for Baltimore versus the Broncos. Huntley managed to throw for 27 completions on 32 pass attempts.

He didn’t go far with the volume, collecting just 187 passing yards, but the efficiency feels buyable, and he also adds a rushing upside. He’s no Lamar Jackson, but he can extend plays and operate the play-calling like Lamar because of their similar skill sets.

The Ravens get the Steelers in week 14, and it’s a pretty fair matchup to stream a quarterback. Pittsburgh allows the 8th most fantasy points per game to the quarterback position. They also allow the most fantasy points to wide receivers. Huntley could be a huge boom play in week 14 if he can replicate the week 13 passing efficiency. However, it should be noted that the Steelers have not allowed a QB rushing touchdown this season.

Huntley should challenge the Steelers with his legs, but he may not find paydirt on the ground. He is a must-own in Superflex leagues, especially to owners who’ve lost Lamar, Jimmy Garropolo, or even Jacoby Brissett.

This is another Superflex QB target for week 14. You won’t need to add Purdy for a single QB redraft league, but he should be targeted in deeper leagues, specifically with dynasty and keeper formats. Purdy looked good, passing for 25 completions on 37 attempts for 210 passing yards, along with two passing touchdowns and one interception.

Purdy was able to move the ball around to the deep cast of weapons in the 49ers’ offense. Christian Mccaffery didn’t skip a beat, and outside of George Kittle, the key receivers in Brandon Aiyuk and Deebo Samuel were well involved and maintained fantasy relevancy with the backup QB under center.

The 49ers get the Tampa Buccaneers in week 14, and it’s not the most ideal matchup for quarterbacks in fantasy football. Tampa Bay allows the 12th fewest fantasy points per game to quarterbacks. Tampa is a mid-tier defense against QBs, and I don’t believe they should scare us away if were in dire need.

Purdy lands in the middle of the confidence bar for me in week 14. He has a ton of weapons around him; it will be up to him to protect the ball to avoid bustable production through turnovers.

Available in 50% of Leagues

Available in 100% of Leagues

Because He’s Not Very Good

It’s difficult for me to suggest rolling with Rams players in fantasy football. The season is over for Los Angeles as they’ve lost all of their reliable weapons on offense. Cam Akers cleaned up in week 13 as he scored two rushing touchdowns on 17 carries. He also collected 60 rushing yards, which is not very efficient, but the volume is respectable.

The Rams get the Las Vegas Raiders in week 14, and they allow the 7th most fantasy points to the running back position. There are a few key bye teams in week 14, and Akers could be a good fit to replace a key roster loss in crunch time.

No one on the offense feels safe for fantasy, but if you’re going to roll with any of them, it should be Akers. He’ll get meaningful touches and should save you with an anytime touchdown as the Rams play catchup to the Raiders. 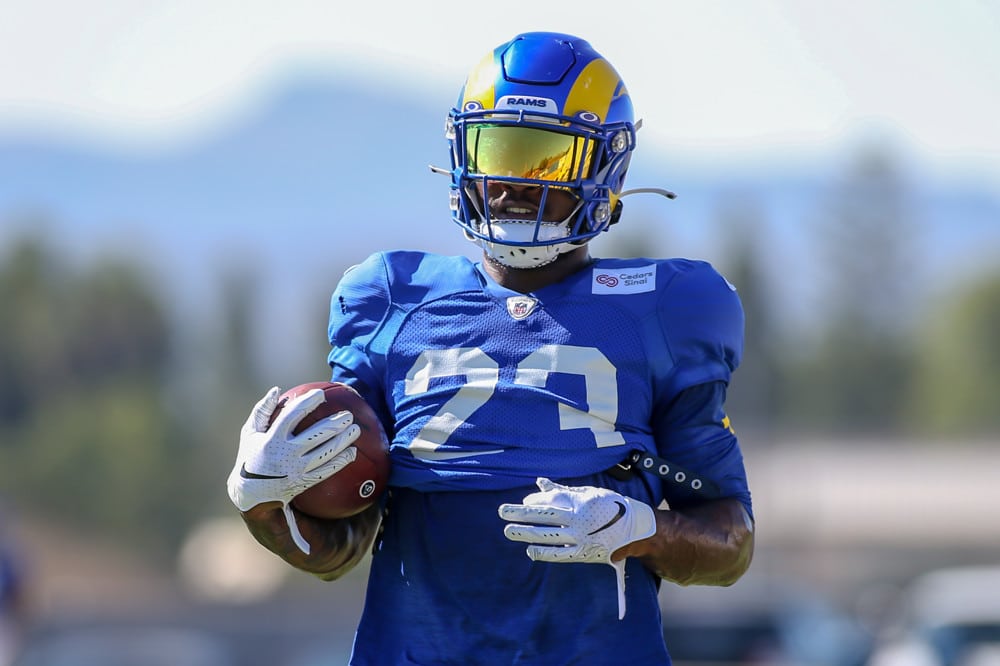 Kenneth Walker exited week 13 with an ankle injury, and his week 14 status is up in the air. DeeJay Dallas filled in with moderate production in week 13. However, the Seattle passing offense looked amazing and should offer a higher confidence level to stream Dallas if he finds himself as the week 14 starter.

This will be a buy option to follow along with the Kenneth Walker injury. Seattle’s keeping the details limited but given their position in the standings; it feels like they could survive a week without Walker. Dallas is a viable stream option if Ken gets the red light, and I’m confident that will be the case.

Available in 91% of Leagues

Available in 85% of Leagues

D.J. Chark is rostered in just 16% of fantasy football leagues. He’s been a name-brand player in the past, so it’s somewhat surprising he is readily available with his return from injury a few weeks ago. Chark had a scoring touchdown last week in week 12, and in week 13, he caught five passes for 98 receiving yards.

He’s a must-own asset after back-to-back weeks with reliable fantasy production. The Minnesota Vikings allow the 5th most fantasy points per game to the wide receiver position, so I’m expecting positive game flow for the Lions and their receivers in week 14. I’m spending what I can to get him rostered if available. He’s a must-start player in week 14!

Someone explain to me how Nico Collins is available in 71% of fantasy football leagues?! The SGPN brand has been banging this drum for weeks now. The situation isn’t ideal with the poor Texans quarterback play. However, Collins is getting amazing volume through his past four starts. He has 19 catches on 36 targets through that period.

In week 13, Collins recorded just three catches on ten targets for 35 receiving yards and a touchdown. The Texans play Dallas in week 14, and while I don’t expect the Texans to compete, I expect Nico Collins to collect reliable production in garbage time. He’s a deep league play for sure, but the volume is there if you’re in need of a week 14 flier.

Available in 87% of Leagues

Available in 63% of Fantasy Leagues

Noah Fant has provided a decent floor over the past few weeks. He’s averaging around four catches a game through his last four starts, and he found paydirt in week 13. He’s not offering booming production with consistency, but the production could rise with the potential injury to Kenneth Walker.

If Walker were out, I suspect there would be a few extra pass attempts to go around, as the Seattle running backs aren’t efficient per-touch assets. Fant would be a home run pickup in TE premium scoring, the Seattle passing offense is fantasy-friendly, and he feels like the next big target behind DK Metcalf and Tyler Lockett.

Greg Dulcich is rostered in 37% of fantasy football leagues. He led all TEs in targets this week with eight. The Broncos lost Courtland Sutton early in week 13 to injury, and that mishap could result in more production for Dulcich in week 14.

Dulcich is a target favorite for Russell Wilson and should be rostered and most likely streamed in a week 14 matchup against the Kansas City Chiefs. I suspect the Broncos will play from behind and that Dulcich could see a similar stat line from garbage time opportunities.