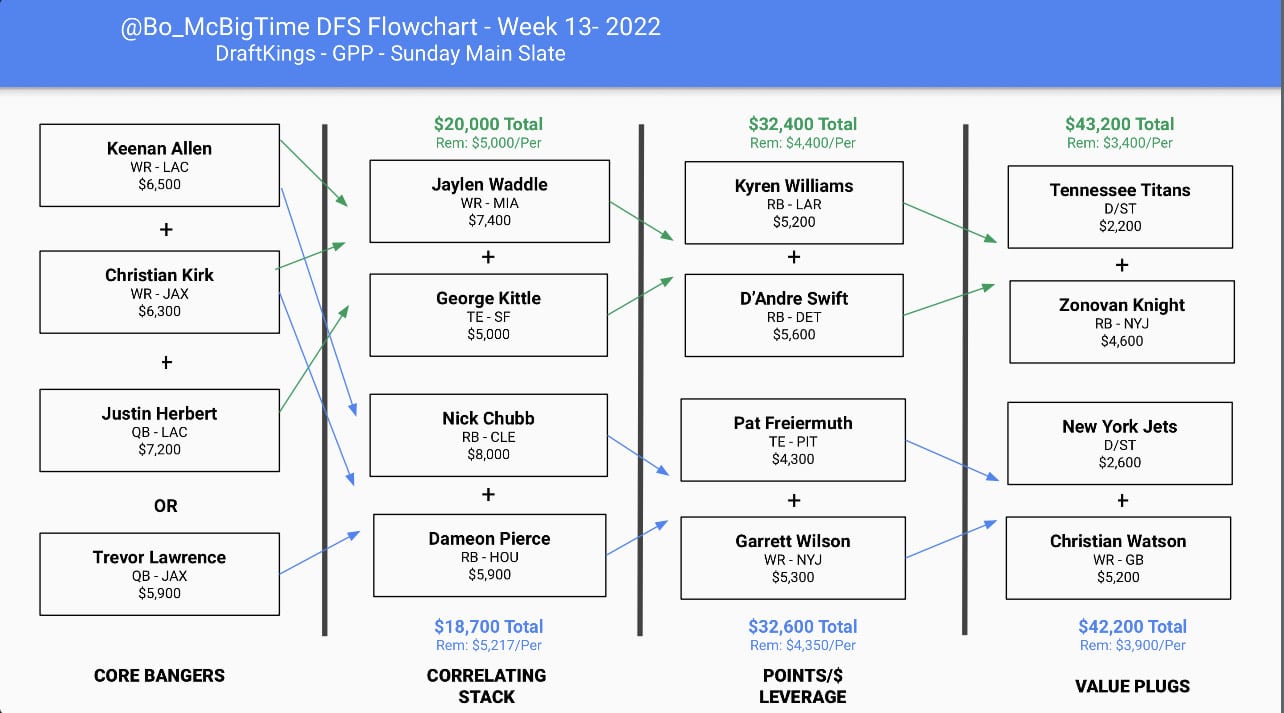 Welcome to the Week 13 NFL FLowchart. Last week was one of the more successful editions of the Flowchart. Aside from a couple of my RB plays succumbing to injuries during the action, nearly every skill player outlined in the Flowchart’s two lineups found the end zone in Week 12. I was beaming with pride, and my DraftKings app was lit up as green as Christmas.

Speaking of Christmas, the NFL action enters the month of December for Week 13 and a bountiful 12-game Sunday main slate. Our strongest plays will be leveraged against our competition this week with more evenly spread chalk. There are also going to be more opportunities to roster players with ultra-low ownership that have meteoric, slate-breaking upside.

The DFS Flowchart is a tool I use to give a visual representation and outline of my player pool. It also reveals pivot points based on pricing tiers and correlation that we can use to our advantage when architecting that optimal lineup on DraftKings. I typically have a relatively narrow player pool and between 50 and 100 total lineups.

I begin with some core plays that I want to have higher exposure to. The subsequent forks in the road offer a multitude of variations to weaponize the player pool in unique ways. Chalk is like bacteria; it isn’t always harmful.

It is more important to play optimal players than to worry about how many entries will have the same idea. A leverage player or two catching fire is all that it takes to hit big numbers and be different. Here is my take on the Week 13 Sunday main slate on DraftKings.

It’s only a coincidence that the two QBs I’ll be stacking around the most on Sunday are both 6-foot-6. In the case of Justin Herbert, his immense talent will be completely overwhelming for the pathetic Raiders defense. Keenan Allen will be the weapon of choice in what I predict will be a high-scoring beatdown.

Trevor Lawrence is very quietly playing out of his mind this season and is the QB10 in fantasy. His date with the Detroit Lions is going to garner a ton of chalk, but that just means we will get more creative with the stacks in that game. Christian Kirk is a scythe in the slot, and the Lions are giving up the most fantasy points to slot receivers in the NFL.

There are a few people in the minority, along with me, who think the Miami Dolphins offense will overwhelm the supposed defensive juggernauts from San Francisco. The 49ers have only faced two top-12 offenses this entire season and none since they were obliterated by the Chiefs 44-23 in Week 7.

Not only does Tua Tagovailoa absolutely crush Cover-3 (SF’s predominant coverage look), but the duo of Tyreek Hill and Jaylen Waddle have the narrowest and most dominant route tree in the NFL. On the other side of the ball, George Kittle is severely underpriced at $5k and faces a Miami defense that is 30th versus opposing TEs.

We are occasionally blessed with two teams with the same weakness in the same game. The Texans and Browns will be a must-watch game because of Deshaun Watson’s controversial return to the field. I think both teams will enjoy plenty of running room, with Nick Chubb and Dameon Pierce in line to put up huge points. Face-off stacks occasionally fail due to the moving clock, but I am confident both guys can go off independently. Do not fear.

Look For the Helpers

I am giddy about all the upside value at the RB position this week. There are too many good ones to get over my skis on any one guy. Kyren Williams out-touched Cam Akers last week and was already a better receiving option for the Rams. We just saw Josh Jacobs put up over 300 scrimmage yards on this Seattle defense. Wheels up! D’Andre Swift is the absolute cheapest he has ever been…and that’s wonderful.

His usage is due to tick up right on time for a date with the puny Jaguars front. The law is “if Swift is active, you play him in DFS.” I’m going out on a limb and predicting that Pat Freiermuth will be the top TE in PPR scoring this week and definitely the weapon of choice if not spending up for Travis Kelce or George Kittle.

Garrett Wilson will carry an unholy amount of chalk with him this week, but I’m playing him anyway. He is a pure points-per-dollar value against a vulnerable Vikings secondary.

Match Made in Hell

Call me crazy (I am), but I think the Titans beat the Eagles on Sunday. They are built like a souped-up version of the Commanders, who bludgeoned Philly in primetime a couple of weeks ago for their only loss. Rushing yard regression will be cruel, going from the porous Packers to the treacherous Titans front. At the bottom of the DST pricing scale, I expect the Titans to be the best value on the slate.

Michael Carter is doubtful for Sunday, opening up a lane for Zonovan “Bam” Knight to carry the load again. The Vikings are only okay at stopping the run. If Dalvin Cook doesn’t have a great game, I think a one-dimensional Kirk Cousins will struggle mightily trying to air it out on the AFC’s best CB tandem.

If you keep hitting blackjacks, don’t walk away from the table. Christian Watson is a touchdown machine and shouldn’t have any trouble keeping the streak alive versus the Bears’ tattered secondary.