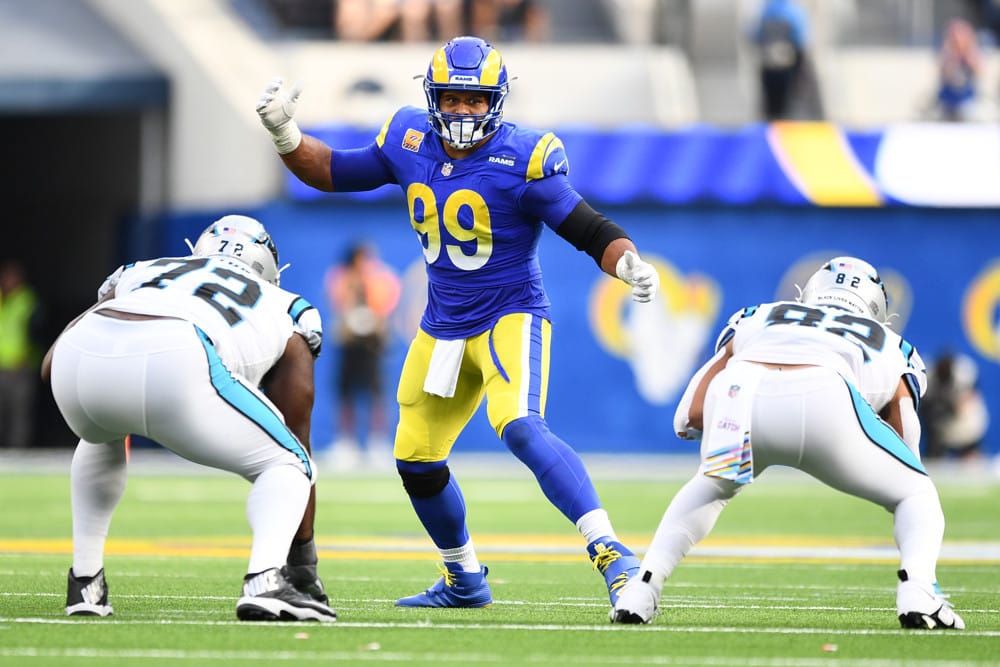 Hitting a wall recently, future Hall Of Famer Aaron Donald had a pretty tough contest in week 12. And to be honest, most stud defensive linemen find it hard to produce versus the Chiefs this season. But that’s not just the only thing to mention. Because now Donald was potentially dealt a blow with a high ankle sprain. The rumor mill has it they could shut down Donald completely for the rest of the season.

So despite his stellar fantasy output in the last 3 games versus the Seahawks, we have to say that Aron Donald’s stock is down based on the idea he does have this high-ankle injury. It’s just too risky. At this point in the fantasy football season, it will be tough to insert him as a starter with any confidence. An injury like this can affect bending off the edge, or bullying his way up through the interior into backfields.

Aaron Donald is dealing with a potential high ankle sprain, according to Rams HC Sean McVay. McVay added they will know more later in the week and he hasn't ruled out shutting down Donald, Matthew Stafford or Cooper Kupp for the seasonhttps://t.co/5zDQS02tBj pic.twitter.com/G9rdhba6Dp

It’s risky to start him in Week 13 because he’s gone from 95% to 72% in snaps in the last 3 games. Additionally, this match-up is with Houston. It’s no secret the Texans aren’t good on offense. This is reflected in the total IDP production allowed altogether. One of the worst production-allowed categories they have is too the designated LB position.

Those couple of things together is enough to say that Sione TakiTaki’s stock is down in this Week 13 IDP matchup. This is likely the case for the rest of the season at this point. That’s if we hope we’re getting top-tier LB1 production out of him with JOK healthy again.

We can’t go any lower when projecting Jacksonville’s rookie linebacker Devin Lloyd going forward. After a few weeks of recently losing some playing time to Chad Muma, Lloyd has more than just given way to Muma. He was basically demoted in Week 12. So if you were holding out any hope at all, this was the deal breaker for his outlook for the rest of this 2022 season.

So starting him in Week 13 in IDP leagues in any format is a bad decision. This is certainly the case in this week’s middling matchup versus the Lions. We will note there is a slim possibility here due to the fact we might hear of an injury to either Foysdae Oluokun or Muma. It does make Devin Lioyd an instant waiter wire darling.

Don’t give up on him in dynasty leagues either. He isn’t losing his future as an LB1 target. It’s been addressed by the coaching staff they just want to give 3rd round Chad Muma more time to develop. Not because Lloyd failed at his job either or didn’t live up to his fantasy football draft status on film. Furthermore, to be honest, Muma doesn’t look all that good as an every-down Linebacker right now.

(Sorry: had to sneak through the scum, so beginning got cut off. Here’s the text)

“I started off hot and then the last few weeks it wasn’t as good as I was in the beginning.. some people say it’s that”#Jaguars pic.twitter.com/m0mut0J8o7

Those of you that have followed me from the beginning know I have a soft spot for Houston’s safety Jonathan Owens. A little breakout call of mine this past offseason. I’ll admit he’s not been as consistent as we’d like. But when he was on almost every waiver wire out there to start the season, who am I to complain?

Recapping Week 11, Owens simply flopped and why he’s in the stock-up IDP category versus the Browns in Houston. That last contest with Miami was also a great matchup on paper. However, if we look at how everyone around Owens produced in the secondary, we note there were a couple of outlier performances. We have to remember that sometimes things like this just happen. Owens gets a pass considering his consistency when the matchup has been solid. There have also been enough occasions he’s overachieved when it hasn’t.

Nonetheless, if you’re at that point you’ve been managing Owens, and you need him this week. The Browns are top 12 in points allowed to the Safety position. Not to mention the poor Texans pass rush versus the Brown’s strong offensive line matchup is looming. Owens’ stock is up in Week 13 IDP fantasy football leagues. He will hit his weekly average as a floor play versus the Browns in this matchup.

Owens is currently leading the NFL in tackles with 25. pic.twitter.com/IQCQTBJlgq

The biggest letdown for those depending on him had to be linebacker T.J. Edwards. The Eagle scored just 1/3 of his normal fantasy points in most balanced formats. Worse, it’s after he had put up so many LB1 performances across so many points in his career. However, I will admit even I became complacent. I gave him the benefit of the doubt in a matchup last week that really wasn’t all that solid on paper.

It’s a whole new ball game in Week 13 though. Just like all these players we’ve mentioned so far, T.J. Edwards played his normal amount of snaps last game. Facing the Titans isn’t exactly a strong matchup on paper either. Chances are that you need him versus this Titans running game, he’ll be ready to overachieve again no matter the matchup.

If there is anything at this point and time that matters, it’s consistency. T.J. Edwards passed that test back in the first month of the season. So we will live and die by the sword and hope he’ll hit his weekly average in your league and his floor projection for Week 13.

The matchup was ripe for sacks in Week 12 for the Dallas edge rushers. Not only had the Giants allowed top 3 IDP production off the edge all season, but in Week 3 Demarcus Lawrence had 3 of the team’s 5 sacks the first time they met. He also notched 6 solos with 3 of them going for tackles for losses.

In that same contest, stud edge rushing Linebacker Micah Parsons flopped. Recording just one solo tackle for a loss while playing 84% of the snaps. Demarcus Lawrence wasn’t exactly 100% either. He was dealing with a knee injury and illness at the time. Missing almost all the practices before the early Thursday contest. So considering he had 7 total pressures and 2 QB hits he was productive.

We also should take into consideration Parson had 2 sacks in Week 12. So it seems they dialed up Parsons way more this time than Lawrence. Not shocking they basically flipped whose role was what in this contest too. Their other edge rusher Dorance Armstrong held steady.

So we can assume as long as there aren’t any setbacks with his knee that Lawrence will be up to par versus the Colts this week. This isn’t the strongest of matchups but it is still very solid for the DLs across the board in general. So his odds are more than solid that he’ll get back into their backfield and connect this contest.

Especially knowing between Colt’s starting quarterback Matt Ryan and Sam Ehlingert they rank top 12 in allowing sacks in the NFL with 26 at the moment. That’s over two a game on average. So odds are Lawrence hits his week 13 IDP points average this contest no problem.

DeMarcus Lawrence led the #Cowboys with 7 total pressures vs. NYG. Gets overshadowed by MP, but DLaw continues to operate at a high level in the shadows. Stud!