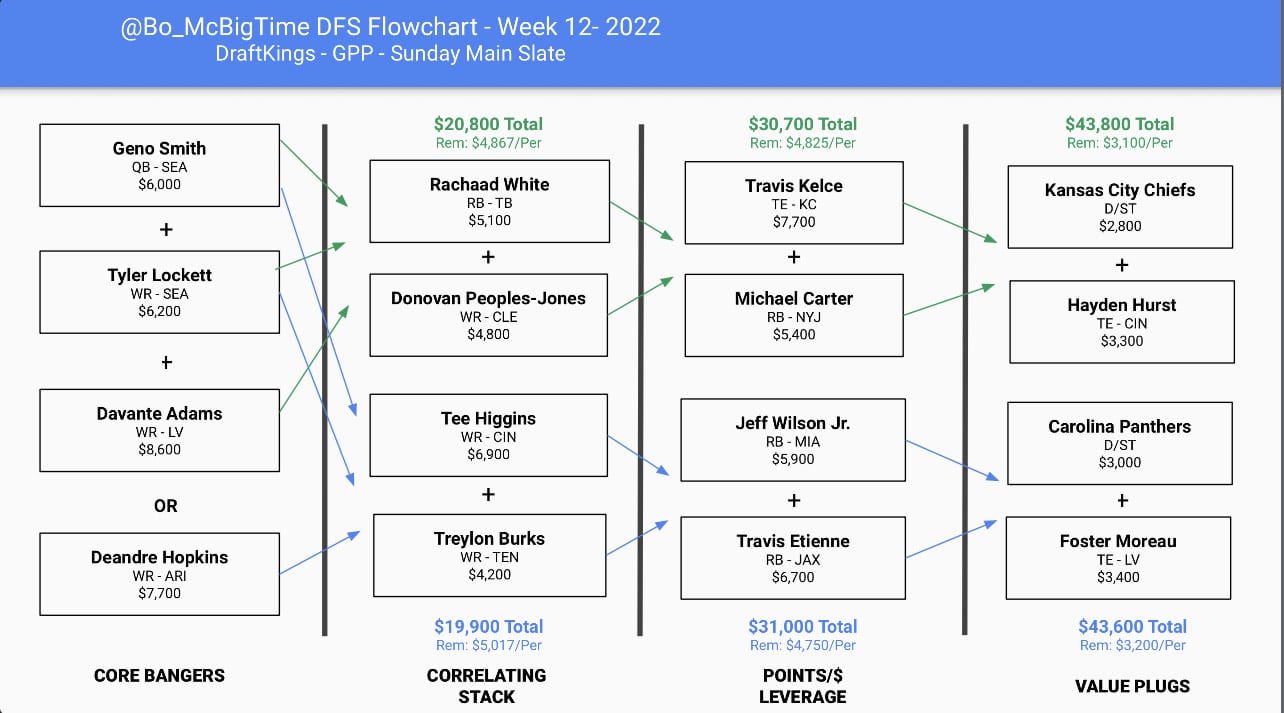 Last week was tough, but there were still DFS lineups stemming from the Flowchart that easily crossed the pay line. The best DFS managers must remain flexible and creative in their lineup construction. The mission of this Flowchart and article is to identify some of the best plays in my personal player pool and visualize my thought process in architecting optimal lineups.

Contest selection is still of paramount importance in managing your personal bankroll and offering the best odds of winning. With that in mind, let’s break down this 11-game main slate dive deep into the Week 12 NFL Flowchart.

It’s nothing personal, but the Raiders have a terrible defense. Grabbing the low-hanging fruit is the oldest trick in the DFS book.. Seattle’s offense has been among the most efficient all season, thanks to a miraculous Geno Smith renaissance. I love both of his receiving weapons, DK Metcalf and Tyler Lockett.

Noah Fant and Will Dissly offer some dart-throw values at TE. Kenneth Walker III might have the biggest game of all of them, but he will be a one-off play in my pool. Correlating the omnipotent Davante Adams with the stack savings is a money move. He just got done barbecuing Patrick Surtain and now sets his sights on talented rookie Tariq Woolen.

The game between the Buccaneers and Browns figures to be a sneaky shootout candidate. I am not opposed to various stacks with Tom Brady, but the prize I’m loading up on is the rookie RB Rachaad White. He is pulling away from the dinged-up Leonard Fournette as the season progresses and provides some serious volume-based receiving upside.

Donovan Peoples-Jones has been one of the most consistent and underappreciated WRs in the NFL this season. He is a great deal cheaper than Amari Cooper and will benefit from the softer coverage in Cooper’s shadow. Another Brown’s weapon I like, health permitting, is TE David Njoku. The Bucs are 29th at defending the TE position this season, and Njoku was one of Jacoby Brissett’s favorite targets before he got hurt.

With how many of the top WRs on this slate have great matchups, I find myself ignoring the top of the RB scale. Not to say they aren’t great plays this week. Austin Ekeler and Josh Jacobs carry a ton of upside in their own right, but I find just as much value in the lower to middle tiers. Travis Etienne and Kenneth Walker have just as high of a ceiling as the most expensive RBs this week, along with arguably easier matchups.

Further down the board are a litany of RBs who are excellent value plays this week. I have a feeling I will end up with more 3RB builds than usual, with how many guys in my pool under $6k. Jeff Wilson and Raheem Mostert are both intriguing value play for Miami, while Michael Carter finally has a QB who will check down to him and let him pile on a bunch of cheap PPR points.

I also like D’Onta Foreman and Gus Edwards, along with Antonio Gibson. Call me crazy, but one of Cam Akers or Kyren Williams could surprise you with a big day as well.

This will be another great week to roster two TEs in your build. Travis Kelce should be one of them, but you can find plenty of value down to around $3k for the other one. Foster Moreau has only had one decent game this season, but his matchup is stellar at Seattle. If the Titans can heat up Joe Burrow, it can serve to funnel some extra work to Hayden Hurst.

Gerald Everett might not get the deserved chalk facing the putrid-against-TEs Arizona defense because he’s up to $4,400. That’s not too rich for my blood, especially stacked with Justin Herbert and Keenan Allen or Austin Ekeler.

It’s hard to get a read yet on which defenses will be less popular. Spending up on DST on this main slate will most likely be suboptimal. Although I highlighted the Panthers and Chiefs in the Flowchart, I love the Jets DST again this week. They are the most expensive DST in my pool at $3.3k unless I see that the Dolphins’ chalk is subsiding. I might also toss in some Commanders with how they stop the run.