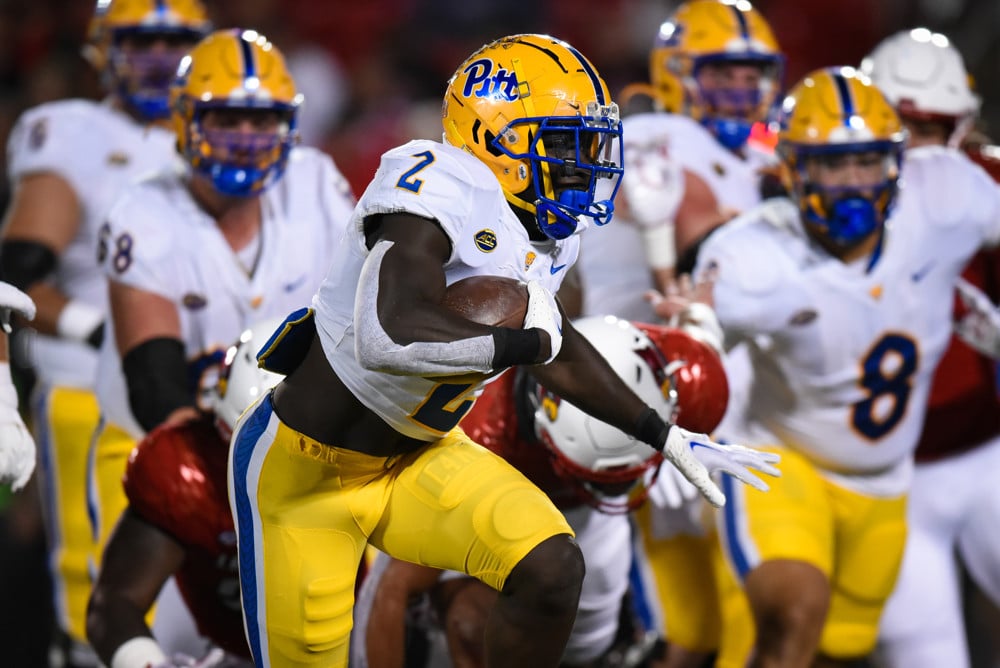 College hoops has tipped off and we’re getting updated College Football Playoff (Invitational) Rankings every week. That can only mean that it’s November, and we don’t have much of a college football season left. In fact, after Saturday, we only get three full weeks of college football before conference championships start and then we roll into bowl season.

While there are fewer game days behind us than ahead for the 2022 season, we still have five point totals bets that you can take to keep building your bank roll.

Pittsburgh should be able to move the ball any way they want to on offense against Virginia. Star running back Israel Abanikanda is already over 1,000 yards on the season and has racked up 16 touchdowns. Quarterback Kedon Slovis has proven capable when the Panthers have kept him upright and healthy.

Pittsburgh hasn’t been great on the road, but they’ve also gone into a few tough environments. a 3-6 Virginia team that probably won’t be bowl-eligible shouldn’t represent that big of a challenge. Jump on the team total over for Pittsburgh on Saturday and cash.

Texas St.’s averages are padded by a shutout win over FCS school Houston Baptist and a win over Florida International that saw the Bobcats allow only 12 points. The Bobcats have been getting rolled regularly, and South Alabama’s high-powered offense will likely end the day closer to 40 points scored than only 30. The Jaguars have been over 40 points at home in every game except a weird 10-6 loss to Troy. Jaguars Running back La’Damian Webb should be in line for a huge game against the Bobcats. South Alabama should roll on Saturday and rack up a ton of points along the way.

Continuing with the Sun Belt theme for Saturday, Coastal Carolina gets Southern Miss coming to Conway, SC on Saturday, and the books have only set their total at 26.5

In four road games this year, Southern Miss has allowed over 26.5 points twice. Miami racked up 30 points, while Troy scored 27. The Golden Eagles are also coming off a 42-14 spanking at the hands of Georgia St. The Panthers ran for almost 400 yards against Southern Miss. Coastal Carolina should managed to do the same.

The Chanticleers will miss quarterback Grayson McCall for the rest of the year, but they can run the ball. Running back C.J. Beasley has over 500 yards rushing for the Chanticleers, and back up Reese White has 372 yards on the ground with a 6.1 yards per carry average. Coastal Carolina is averaging 174.6 yards per game on the ground this year, and shouldn’t have any trouble racking up yards on a suspect Southern Miss defense.

The Chanticleers should break 30 points on Saturday against the Golden Eagles. Bang the over and cash this one easy.

Continuing with the Sun Belt Conference, Georgia St. hosts Louisiana-Monroe on Saturday. The books have this one at 58.5 points and that’s just too few. Georgia St. can move the ball on offense, but they can’t stop anyone, even at home. The Panthers have been over 58.5 points in four out of five games this year. The lone outlier was a 31-17 win against Old Dominion.

ULM isn’t that bad on offense this year. They’re averaging 23.4 points per game and quarterback Chandler Rogers has a 14:6 TD:INT ratio, and has three touchdowns on the ground and one as a receiver. The concern for ULM, much like Georgia St., is that they can’t play defense. The Warhawks are averaging 36.8 points per game allowed this year. That’s 125th out 131 teams. In nine games this year, the Warhawks have been over 58.5 points in six of them. One of the outliers was a 35-7 win over Nicholls St.

This should be a track meet from the start, and these two teams should be able to rack up over 60 points on Saturday.

In Clemson’s four home games this year, they’ve been under 51.5 points three times. In four road games this year, Louisville has been under 51.5 points three times. Conference match-ups like this tend to turn into rock fights, and that’s what this game looks like it could end up as. Also, both of these teams tend to lean more on their ground attack than their passing game. This game could have over 80 running plays between the two teams. That means the clock will get chewed up quicker, and the total points should end up under 51.5 points.