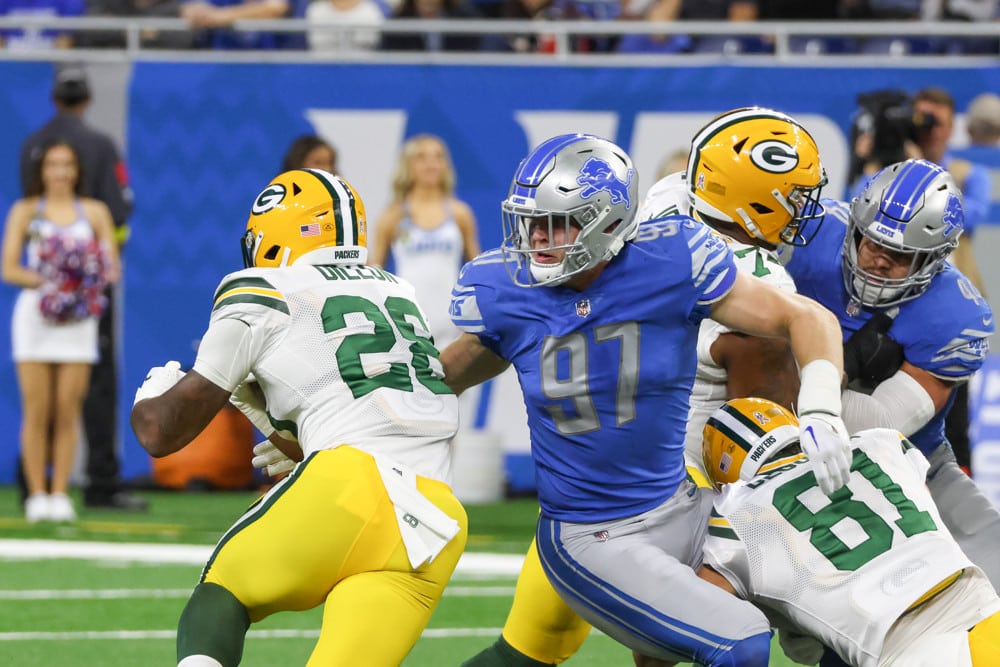 In the week 9 NFL Snap Share Report we will discuss our usual but also start to really discuss bye weeks and players to target as coverage. For the Week 7 article, we discussed some additions or trade targets that produced for your fantasy teams if you listened.

With the Week 8 article, we talked about the importance of backup running backs and identified who you needed to go and get. So who are our movers and what should we do about bye weeks? Let’s get into it.

This list is full of folks you should target in mid-season trades as we move into the fantasy football playoffs.

AJ Dillon, Jamal Williams, Antonio Gibson, James Robinson, Kenyan Drake, Rachaad White, and Kenneth Gainwell are all folks who are not looked at as the primary running back in their respective system. However, the handcuff is important as we mentioned last week.

He has seen 15 or more opportunities in 6 of 9 games and just isn’t hitting the endzone. If you didn’t buy him last week like I mentioned, you may be too late with the injury to Aaron Jones.

Lost but not forgotten in my eyes. I have held everywhere and he continues to show he is the best player in the backfield. He played his highest snap percentage since week 1 of the NFL season at 58% and has turned into a trusted target of the interim quarterback. Over the 3 weeks of backup quarterback play, he has seen 14 targets and 2 touchdowns.

He has already seen significant jumps in snaps in his two weeks with the team. Robinson out-touched Michael Carter in less snaps in week 9. I expect this trend to continue in the direction that favors James Robinson.

At just 50% owned, White is a must add to your roster. Over the last 6 weeks White has averaged over 3 targets per game and has looked well the last few weeks rushing the ball. Rumblings have started coming out of Tampa that White may overtake Fournette as the primary ball carrier.

We mentioned getting him on your squad last week and this just solidifies that notion and also likely makes him more expensive. Keep an eye on the week 11 bye as people may have to drop him to make room. If it happens snatch him up as quickly as possible.

.@LordDontLose says it could be Rachaad White time soon. ⌚ pic.twitter.com/x0jaiqyeHK

It appears like the mess that is LA may be leaning towards giving Henderson more of the work. Akers did see some snaps last week since the team couldn’t trade him but Henderson is much more explosive at this point. Not to mention he is past his bye week and has a pretty juicy schedule, with 8 of 9 matchups being a plus for him. I would take the time to see if you could obtain him for a reasonable price.

Week 9 saw the Browns, Giants, Steelers, Broncos, Cowboys, and 49er’s on bye. Some big hitters in all your key positions. Cool thing in fantasy is that sometimes, owners are forced to make decisions they otherwise may not make. Here are some players that are returning from bye that may be available.

Seen 70 plus yards receiving in 4 of last 5 games

Should be the lead target guy in NY for foreseeable future

Should be secondary option for Pickett

With Albert O made inactive and the combination of Seubert and Beck being underwhelming he will dominate the TE opportunities.

With 5 weeks under his belt and a bye week to really get healthy, I’m calling my shot. He will have a blowup week in week 19 against the GB Packers.

Hasn’t played since week 1 before injuring his knee. He is an absolute must add, especially for the CMC owners.

Four teams are on bye with the Bengals, Ravens, Patriots, and Jets. So lets take a look at some players that may have been dropped to support full rosters.

Dropped in roughly 5% of leagues

Hayden Hurst is currently the TE8 and has seen 4 or more targets in 7 of 9 games. If you have the roster spot, get him added.

With Bateman out for the season, hopefully some light has been shed on the WR room and you should look to get in at some level. I would target Likely, Robinson, Duvernay, Jackson in that order.

Dropped a ton and available in 26% of leagues

Missed basically all of week 8, sat week 9, and had the week 10 bye week. He is the top target for Mac Jones side by side with Jakobi Meyers.

He’s back! With the Elijah Moore drama, he has been at a greater than 75% snap percentage over the last 2 weeks. He will be getting some opportunity and may be worth an add going into week 11. I’m not saying to pick him up and hold him through the bye but may be worth an add after week 10.