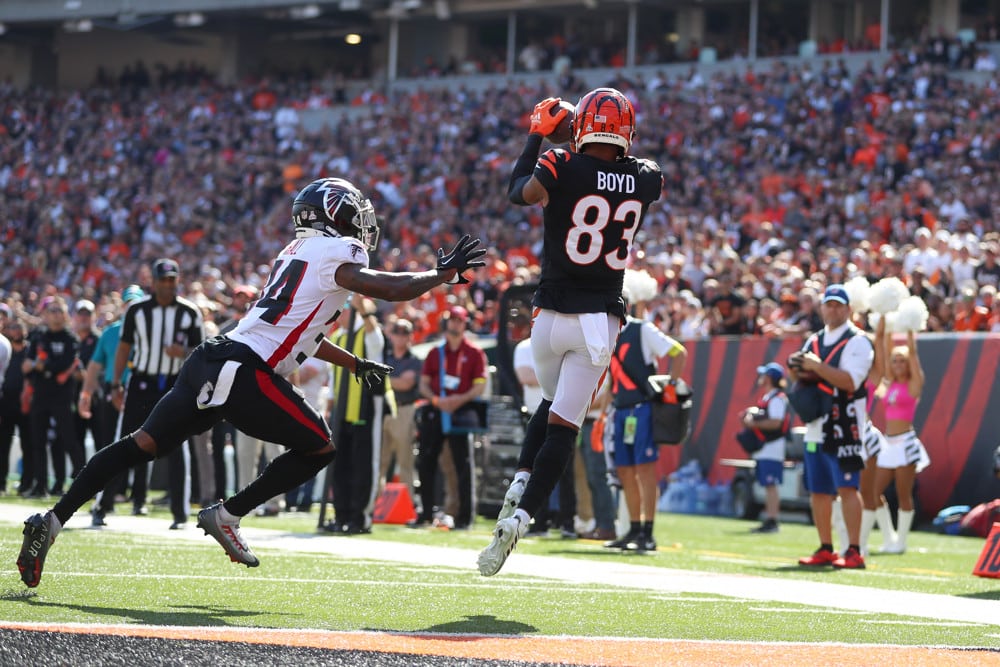 SGPN is back with our Week Eight Fantasy Football Rankings. Our staff has diligently ranked each fantasy-relevant player on the Week Eight slate to help you win those critical matchups as you vie for a playoff spot. In this article, I want to introduce the SGPN weekly rankings update as well as talk about some of the biggest differences between my rankings and the rest of the staff.

You can find us on Twitter @SGPNFantasy and on our Discord Channel because we’re always talking fantasy football. Our goal is to help you win each week and push your fantasy football team on a deep playoff run. Follow the link below to catch the Week 7 SGPN Fantasy Football Rankings Update.

The SGPN RB7 coming into Week Eight, I actually have Joe Mixon much lower in my rankings as the RB12. While I had high hopes coming into the season, Mixon has been disappointing for fantasy to this point. He’s 62nd in yards per carry and 49th in yards created per touch (PlayerProfiler). He’s been very inefficient which has resulted in a decrease in usage. After averaging 25 opportunities through the first four weeks of the season, that is down to just 16 over the last three weeks.

The Bengal’s offense is finding success in shifting to a more pass-heavy approach so his usage isn’t likely to go up in the near future. While he will still have some big games, he’s not going to be the locked-in RB1 fantasy managers hoped. Even in a juicy matchup against the league’s 9th worst rush defense I have him as a fringe RB1.

The #Bengals offense is supporting a fantasy WR1, RB1, TE1, and TWO WR2s.

David Montgomery is another player I have significantly lower in my rankings as the RB27 compared to the SGPN RB17. While he still has a clear role in the offense, that is the only thing supporting his fantasy upside. The Bear’s offense is limited as they rank 24th in total touchdowns and have been a disaster most of the season. With short drives and scoring opportunities hard to come by it’s hard to get excited about Montgomery’s fantasy prospects.

Additionally, despite the coaching staff’s insistence on giving him a larger role, he hasn’t been as efficient as Khalil Herbert. He averages 6.16 yards per carry compared to Montgomery’s 4 and he looks much more explosive. While Montgomery has dominated the snap share when healthy, that changed this past game though. The gap closed 54% to 41% and Herbert was more effective in the passing game as well. The Bears could continue to divide the workload further making Montgomery a part of a committee backfield in a bad offense.

Why does David Montgomery play over Khalil Herbert?

Brian Robinson is very similar to David Montgomery in that they are locked into 12-15 rushing attempts with little passing work. Both offenses are poor leaving both Running Backs as touchdown-dependant. Each of the last two weeks their backfield partners have been more efficient than them as well. The Bears and Commanders have established their preferences but that doesn’t mean that couldn’t change in the future if these two backs don’t improve.

As a result, Robinson is the RB26 in my rankings compared to the RB19 in the latest Week Eight rankings update from SGPN. While Robinson has a relatively locked-in workload, I would prefer the upside of a player like Gus Edwards if he plays in a better offense. I’ll be avoiding Robinson as anything more than a low upside flex option in Week Eight.

I’m skeptical to say anything negative about Brian Robinson. The fact that he’s even playing right now is a miracle in itself.

But he has not been good.

This might be the widest difference between me and the consensus Week Eight fantasy football rankings. The staff has Brandin Cooks as the WR24 and I have him as the WR35. He’s actually only the WR48 in PPR leagues on the season scoring single digits in four of his six performances. In a game this past week where Davis Mills finally had a solid fantasy performance, Cooks managed only 46 yards receiving.

Nonetheless, the matchup is fantastic against the Titans and I thought I was generously ranking him in WR3 territory as a result. Apparently, I was wrong though as the staff has him as a WR2 still. I can’t figure out if it’s the name recognition or the Titan’s poor pass defense but regardless it is much too high for me. The upside is there if he can get the targets, but the consistency hasn’t been there this year to give me any confidence.

Players that are officially OUT of the Circle of Trust ⬇️

The WR17 on the season in PPR leagues, Tyler Boyd finds himself as the WR39 in our Week Eight fantasy football rankings. He’s benefited from some injuries to Tee Higgins and some tight coverage on Jamar Chase. Regardless, he’s seen an increasing role as Joe Mixon’s role has declined. The Bengals rank 6th in the NFL in pass plays per game and are beginning to look like the team that played in the Super Bowl last season.

Despite Higgins and Chase playing full-time roles each of the last two weeks, Higgins has received 15 targets too. Boyd is going to have some boom-and-bust performances. However, the boom weeks have to keep him as a WR3 in fantasy football rankings most weeks. He’s my WR31 with a wide range of outcomes against an average Cleveland Brown passing defense.

Tyler Boyd as the WR3 on his team is having better fantasy years than some teams WR1s.

This is another player I thought I was being extremely generous ranking as the TE10 and was shocked. He checks in as the TE6 in our SGPN rankings and I’m having a hard time understanding this one. I want Pitts to succeed as well but it simply hasn’t happened this season. He’s the 22nd ranked Tight End in PPR leagues on the season and has scored below 5 PPR points in three of six matchups.

The talent is definitely there as he still ranks second in target share among Tight Ends. In a bad offense though that is 30th in pass attempts, there is little room for any receiver to be successful. There aren’t any reliable starters on the Atlanta Falcons offense right now and Pitts is no exception. I will likely be moving him out of TE1 range when I update my rankings again later this week and he is simply a streaming option for the rest of 2022.

I’ve reached that point in the season where Pat Freiermuth is an auto start over Kyle Pitts.