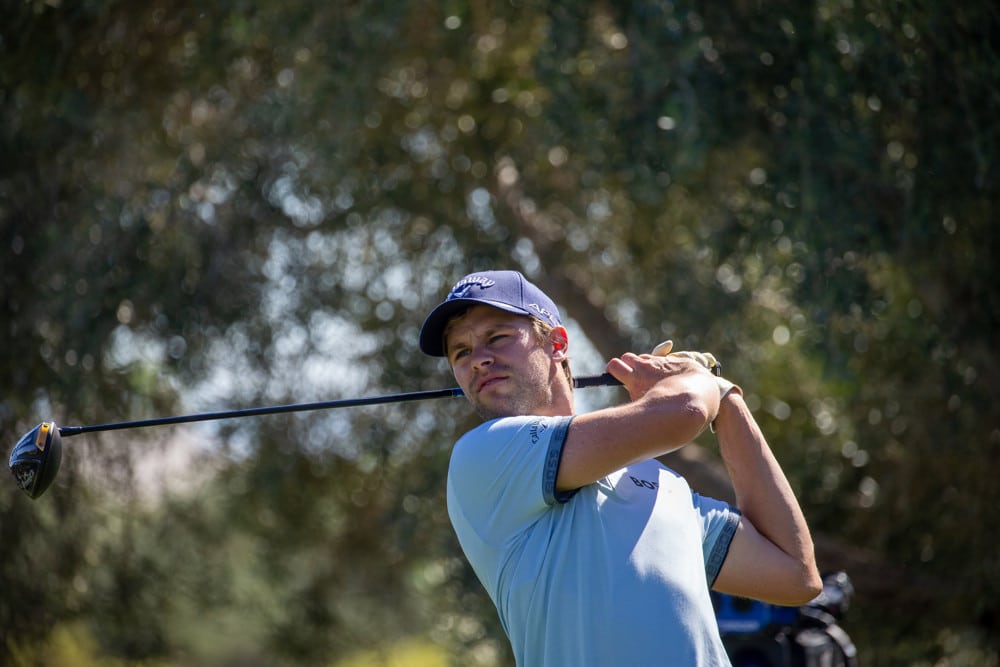 Last week, golf fans and gamblers were spoiled by an October All-Star event. 15 of the Top 20 players in the world travelled to the remote recesses of Ridgeland, SC for the CJ Cup. And the event delivered. Top favorite Rory McIlroy took home the title and regained his claim as the World’s Best Golfer.

Think of the polar opposite of the field at the CJ Cup, and that’s what you have for the 2022 Butterfield Bermuda Championship.

I’m a hardcore PGA Tour fan, but not even I can sugar coat how putrid the field is. It’s honestly pretty embarrassing that this is the best the PGA Tour can offer. Especially in the same week that LIV has their season ending championship. The PGA Tour is essentially punting this week and all the buzz will go to that.

I guess the marquee name this week in Bermuda is…Thomas Detry? While he’s technically a PGA Tour rookie, he’s anything but. He’s a seasoned veteran of the European Tour and a very talented young player. This is a pretty critical week for Detry. The back half of the European Ryder Cup team is void of talent. What better week for Detry to stamp his claim as a Captain’s Pick for the 2023 Ryder Cup team with a win on the PGA Tour. And given the competition he’s facing this week, that’s a very real possibility.

Other notables in the field include Mark Hubbard, Seamus Power, Byeong Hun An, S.H. Kim, Will Gordon, Nick Hardy, and Denny McCarthy.

The Port Royal Golf Course was founded in 1965. Due to a dispute between the existing property owners and developers, the course was not completed until 1969. After shifting the layout of the property to accommodate a stubborn farmer, famed golf course architect Robert Trent Jones carved out a wonderful 18 hole layout along the western shores of Bermuda.

As far as the individual holes go, it’s nothing spectacular. The golf course has a fairly basic routing structure. It hasn’t been modernized much from the original Robert Trent Jones design. Everything is out in front of the player this week. The greens have wavy features to it, but nothing too difficult. Overall, this isn’t a golf course that will confuse or befuddle the PGA Tour pros.

But the property itself is what makes this golf course memorable. Situated on the west end of Bermuda, it has absolutely breathtaking views of the Atlantic Ocean. And the entire piece has dramatic elevation changes. The clubhouse sits on top of a hill, with the golf course sprawling downhill in all directions. It’s about a 100-foot drop from the clubhouse to the Par 3 16th green, which is the low point of the golf course. Very few holes play flat tee-to-green. Players will have to adjust their club selections based on uphill and downhill shots.

Port Royal Golf Course is a Par 71 and runs about 6,850 yards on the scorecard. That’s very short for PGA Tour standards. However, the golf course is susceptible to heavy gale winds off the Atlantic Ocean. It’s a short golf course by design. If the winds are up, this can present a stern test. Players will have to contend with gusty crosswinds on several holes. But if the wind is down, then the PGA Tour pros will eat the golf course up.

Port Royal Golf Course is bermudagrass tee-to-green. The greens will run around 11 on the stimpmeter, which is slower than average for PGA Tour standards. As mentioned previously, the threat of significant wind necessitates keeping the greens on the slow side. Otherwise, the golf course is virtually unplayable.

This week is pretty much worse case scenario for gamblers. First, there is no ShotLink and Strokes Gained history to draw upon to try and handicap the golf course and the tournament. And second, there are very few players in this field that have any semblance of reliability. Sure, we could absolutely nail the handicap and get every key stat we need correct. But do we trust that the 25th best iron player in the field will absolutely live up to the billing? Hell no!

So what are we to do? Let’s break down what we know about the three Bermuda Championships at Port Royal Golf Course:

1. As mentioned earlier, Port Royal Golf Course is wall-to-wall bermuda. The greens are TifEagle Bermuda. This is the same strain of bermuda as the following golf courses played on the PGA Tour:

Unfortunately, there are very few players in the field who have played either Kapalua, Concession or Albany GC. However, there are plenty of players who have experience with TifEagle Bermuda at Sea Island, PGA National and Bay Hill.

Brendon Todd and Brian Gay, winners of the 2019 and 2020 Bermuda Championships, were among the leaders in driving accuracy on the week. Lucas Herbert, however, was well below average in fairways hit for the week. That suggests that one should target extremes off the tee this week. If you want to target a shorter hitter, they better hit a lot of fairways. Or target a bomber who is better equipped to gouge out of bermuda rough for their second shot.

Higher rates of hitting approach shots out of the rough typically yields lower greens in regulation rates. However, the fact that in 2019 and 2021 the rates were only slightly below PGA Tour average indicates that the rough at Port Royal isn’t all that penal to hit out of. It also should be noted that the 2020 GIR% rate is much lower than 2021 and 2019 due to weather conditions. It was windy for multiple rounds that year. In 2019, the weather conditions were pretty calm all week. And in 2021, only the final round got gnarly weather conditions. The weather forecast will certainly decide how the field strikes the ball this week.

Overall, the players who generally hit the most greens in regulation in the tournament tended to do quite well on the leaderboard. In terms of the winners, Brendon Todd was 11th in GIR% on the week in 2019. Brian Gay was T15 on the week when he won in 2020. Lucas Herbert, however, only hit 62.5% of his greens in regulation, which was well below the tournament average. Combined with the fact that he didn’t hit a ton of fairways either, it seems like he scrambled and putt his way to a win in 2021. This was the case, as he was T6 in putts per round on the week.

Brendon Todd and Brian Gay, however, seem like they did it the traditional way of lots of fairways, lots of greens and limiting bogeys. But they hit their fair share of putts too. Brian Gay was T4 in putts/round in 2020. And Brendon Todd was T3 in 2019. Regardless of how well one hits it with the irons, you definitely have to putt to do well at the Bermuda Championship.

4. Here are estimated proximity ranges for Port Royal per round. This analysis was done assuming no wind and measuring approximate tee shot locations and distances on each hole. The analysis also took into considering elevation changes tee-to-green, with one club adjustments per 15 feet of elevation changes. Per the weather forecast as of Sunday evening, only Friday seems like there will be significant wind. As such, these ranges should be fairly accurate on Thursday, Saturday and Sunday:

Wind can absolutely change this distribution. And the presence of wind also changes which clubs a PGA Tour player would normally hit into a green. But given the wind doesn’t look like to be a big factor three of 4 days, it’s fair to say gamblers should absolutely look at proximity and scoring rates from <150 yards and >200 yards (particularly on the three long Par 3’s). This provides for 94.4% coverage for all approach shots hit at Port Royal. That’s way higher than most venues the PGA Tour visits.

As such, these are the types of players one should look to target this week. This list should preview what a solid 2022 Butterfield Bermuda Championship betting card will look like:

1. Either a bomber or a super accurate short knocker. Anything in between is unfavorable.

3. Proficient with shorter irons (<150 yards), and long Par 3’s. For long approach shots on the Par 5, there’s a decent chance those holes could be of the three-shot variety, so shorter irons are paramount in those situations.

Follow these tips in this preview, and you should put together a solid betting card and DFS lineup for the 2022 Butterfield Bermuda Championship.