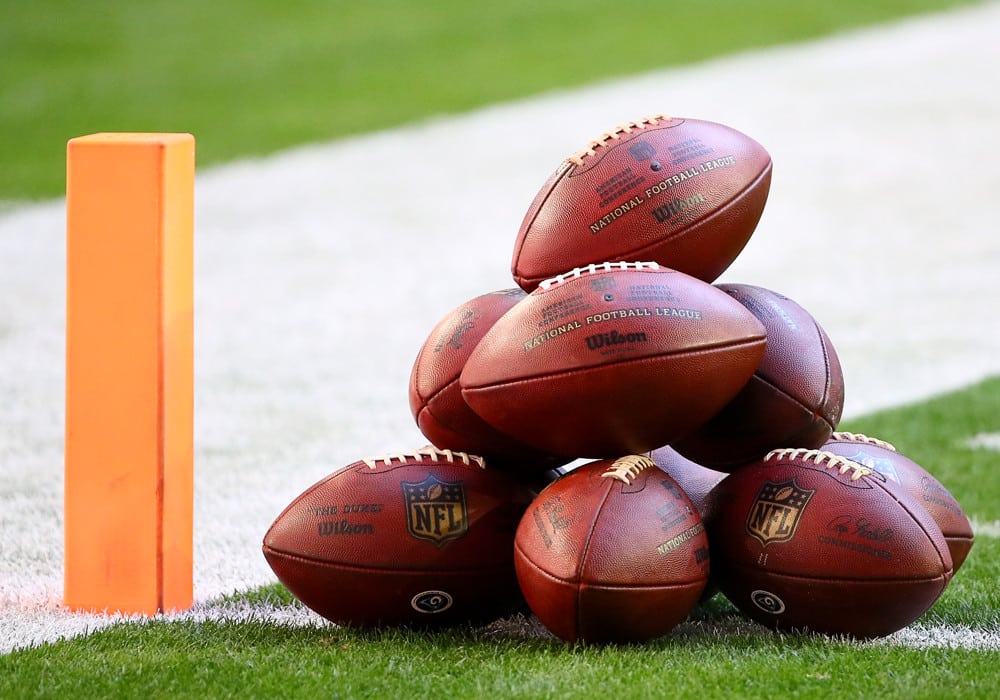 GLENDALE, AZ – DECEMBER 23: Footballs are stacked on the field before the NFL football game between the Arizona Cardinals and the Los Angeles Rams on December 23, 2018 at State Farm Stadium in Glendale, AZ (Photo by Adam Bow/Icon Sportswire) Fantasy Football Week 6 Snap Share Report

NFL Snap shares continue to be the drivers for projecting performance. Last week we discussed the increased snaps of Parris Campbell, Latavius Murray, Olamide Zaccheaus, and Zay Jones to watch all of them have solid fantasy football production. This just continues to prove that the SGPN Fantasy Football team is here to help you win.

Even with a 58% increase in snaps due to the injury sustained by James Conner two weeks ago, Eno dominated the snaps in week 6. He played 87% of snaps and 18 total opportunities, with 54% of the carries and 8% of the targets. I mentioned goal-line work and opportunities that came in week 5. This week was a bad week for the offense as they only had two possessions that got inside the 20 at any point. He got one carry, and Keontay Engram got the other. I

t does look like James Conner will miss the Thursday Night Football contest against the New Orleans Saints, who are very tough against the run and don’t allow a ton of receptions, 17 to the RB position for the season.

I mentioned Rondale Moore a few weeks ago, and boy, has your window now closed. He has seen an increase over the last 3 weeks. Here are his last three weeks:

The window has likely slammed shut, but due to his pedestrian production, you may be able to get him. With Hollywood Brown suffering his foot injury and Hopkins returning, I still expect Moore to continue his ascension. He was also mentioned in our Week 7 article here.

Rondale Moore is about to breakout.

While earning 7.7 targets per game.

He now faces the Saints #19 secondary.

I TOLD YOU! When everyone else was ignoring him, he finally hit, and I hope you listened. Parris Campbell had been playing an average of 81% of snaps before week six, and he topped it all with 100% of snaps. That’s right, 100%. We mentioned how he was getting a ton of opportunities and running a lot of routes. He saw 11 targets and turned that into seven catches for 57 yards and a TD.

I still believe he should be added in redraft formats (only 9% ownership), and if you have a deep bench, he is worth an add. Coach Reich had a lot of good things to say about Campbell as he was getting healthier during camp and pre-season. He has managed to stay healthy and on the field. The production should follow if the offense can start to find a rhythm now that we are a quarter through the season.

Campbell’s partner in crime, Alec Pierce, also is an interesting rookie. He has now seen snaps increase over the past three weeks from 44% to 59% to 65%. He has topped 50 yards in 3 of his 5 games played and got his first NFL touchdown this week. Some context you may not see on the stat sheet is that TD was a game-winning TD when the Colts could have settled for a field goal to win. Matt Ryan is building some trust with him, and he will likely see an uptick in opportunities with Matt Ryan throwing the ball a ton right now. He is owned in 54% of sleeper redraft leagues, so you would likely need to trade for him, and I think for a bench player, you could do worse.

Cam Sims is a guy that has seen his opportunities skyrocket over the last three weeks. He has gone from 7% to 59% to 72% of snaps, yet he is 0% owned in sleeper redraft leagues. Why is that you say, well, number one, through those three weeks, he’s only garnered four targets and two catches for 13 yards. Not to mention the increase in playing time is due to the injury to Jahan Dotson. Let some other suckers spend FAAB on him.

Last week we talked about how messy the Denver backfield had gotten. My recommendation was to add Latavius Murray and let everyone else fight over Mike Boone. They brought in Latavius Murray, who, when filling in for Alvin Kamara 2 weeks ago, garnered 11 carries for over 5 yards per carry and a touchdown. This week Murray was responsible for 65% of the rushes (15), while Mike Boone and Melvin Gordon combined for 30% (7). We saw Melvin Gordon get benched and Mike Boone fall to 3rd down duties (which we also said last week). He is only rostered in 19% of leagues, and you should spend a healthy amount on him.

Kenyan Drake, where have you been the last year and a half? He gave us a glimpse of what we saw in that 2020 season with the Arizona Cardinals this week with a 58% snap share, 127 all-purpose yards, and a touchdown. With the knee tightness that JK Dobbins is experiencing and the lack of explosion that we were hoping for, Kenyan Drake has likely taken over the RB1 role in a run-first offense. He does get the benefit of playing Cleveland’s lackluster rushing defense next week and should be a solid add for your team as a bye-week cover. He’s only owned in 11% of sleeper redraft leagues.

Darnell Mooney has been a big mid-round draft disappointment. While the Chicago Bears look bad, we write this article to explain the opportunity. Darnell Mooney has played over 85% of snaps in every game this season, and that’s what matters. The production will follow regardless of how bad the team is. Over the last three weeks, we’ve seen this where the Bears have started to trust Mooney and give him some opportunities downfield. While he is still owned in 69% of leagues, there is a chance he was dropped due to his poor performance.

We mentioned Olamide Zaccheaus last week in the notes portion of the article. I think he has now earned the right to be discussed. This guy is still only rostered in 4% of sleeper redraft leagues. He has played an average of 61% of snaps and an average yards per target of 15. Zaccheaus has seen an uptick in snaps over the last three weeks and seems to be the deep threat in the offense. He has boom-bust potential, which can be a very valuable asset to a fantasy football team.

Good luck keeping up with these WRs! 👋

Juwan Johnson is an interesting player in the TE position. He has seen an uptick in snaps over the last three weeks from 48% to 57% to 78%. This has led to 5 plus targets in 3 contests. Johnson is a converted WR for the New Orleans Saints, for those of you who aren’t sure. Andy Dalton seems to have some chemistry with Johnson and has received the most red zone targets among the TE’s in New Orleans.