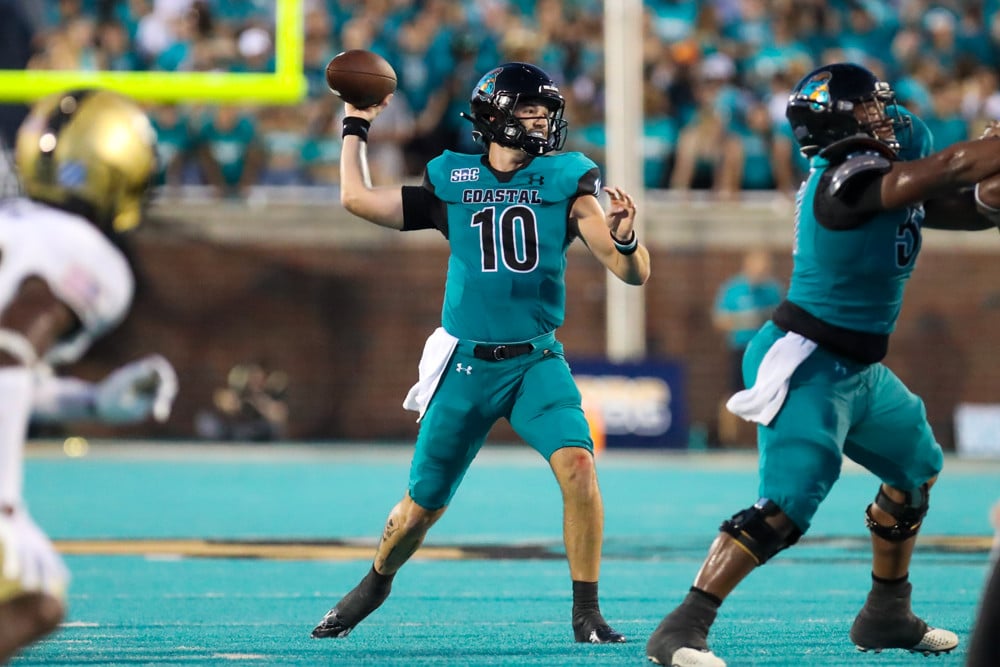 After last week’s run, these college football point totals bets sit at 21-13-1, and have a 60% cash rate. NFL player prop picks went 5-2 last week, but that doesn’t count towards the overall total.

East Carolina no-showed against Tulane. BYU couldn’t manage more than 20 points against Notre Dame. Oregon and Arizona got us with 71 points on a 70.5 Over/Under. Ole Miss and Vanderbilt combined for 80 points. Woof. One win, two bad beats, and two bad picks.

Week 7 features a solid slate and is ideal to bounce back from a rough week. Let’s dig into the five can’t-miss point total bets for Week 7 of the college football season.

Mississippi St. is 4-2 to the over this year, while Kentucky is 1-5 to the under. The right play for these two teams appears to be to the over.

The Bulldogs are capable of scoring points in bunches as quarterback Will Rogers has the offense absolutely humming. Mississippi St. is averaging 38.5 points per game on offense, and their defense has allowed 21.5 points per game.

Kentucky scores 26.3 points per game, but they’ve only gone over 30 points three times this year. They racked up 38 points against Miami(OH), and scored 31 against Northern Illinois and Youngstown St. The Wildcats should be able to score in the upper teens or lower 20’s against a capable Bulldogs defense. That means that Mississippi St. will only need to be in the 25-to-28-point range to clear the over. This won’t be as high-scoring as most of the Bulldogs games, but this should get to 50 points without too much difficulty.

The oddsmakers were a bit aggressive with setting the Over/Under at 66.0 for this one.

Both teams have seen games go over more often than not, but 66 points will likely be out of reach. BYU has only gone over 60 points once this year when they combined with South Florida to score 72. Arkansas has gone over 60 points three times, but one was against FCS Missouri St. They also went over in a shootout against South Carolina and a loss to Alabama.

The Razorbacks are playing the second of three consecutive road games. They only scored 17 points in Starkville, MS against Mississippi St. They also only scored 21 points in a ‘neutral site’ game against Texas A&M.

Between the tough road spot for the Razorbacks, what’s likely going to be more of a ground ‘n’ pound offense for both teams, and a pair of capable defenses, this game should go under, and it shouldn’t be that big of a sweat.

Clemson is 3-3 against the over/under this year, while Florida St. is 2-4 to the under.

This one should be an ACC rock fight. The Clemson offense has looked good against inferior competition. Florida St. features arguably the best defense they’ve faced, and this is in Tallahassee. The Florida St. offense has also looked good against mediocre defenses. Clemson’s defense is a huge step up in competition and the Seminoles are likely to struggle. The Seminoles should be without running back Treshaun Ward. They have a lot of depth in the backfield, but Ward’s absence will be felt. There are also concerns with depth for Florida St. on the offensive line

There’s a non-zero chance that these two teams don’t break 40 points, let alone 50. Bettors need to be on the under for this week 7 ACC match up.

Old Dominion is allowing 27.2 points per game against. They’ve lost both of their road games this year. The Monarchs gave up 39 points on the road at East Carolina, and 16 points to Virginia Tech in Blacksburg.

Coastal Carolina has proven that as long as Grayson McCall is at the helm, they’re going to score in bunches, especially at home on the teal turf. The Chanticleers should light up the Monarchs defense, and they should go over in un-sweaty fashion.

Fresno St. is coming into this one as a bit of a mess. Since getting rolled by USC and losing quarterback Jake Haener, the Bulldogs have lost to Connecticut, and given up 40 points to a Boise St. team that has struggled offensively this year. Fresno St. has allowed 29.6 points per game on defense. That’s 89th out of 131 FBS teams.

San Jose St. has gone over 30 points in three straight wins. The Spartans put up 34 against Western Michigan, 33 against Wyoming in Cheyenne, and 40 points against UNLV.

Last year, the Bulldogs wrecked San Jose St. in San Jose, 40-9. This year? It looks like it’s the Spartans turn to play bully ball. San Jose St. quarterback Chevan Cordeiro has provided six touchdowns through the air and six touchdowns on the ground. He’s yet to throw an interception, and appears to be at home in Brent Brennan‘s offense. The Spartans have shown they can score, the Bulldogs have shown they give up points, and the odds makers have set this team total too low.