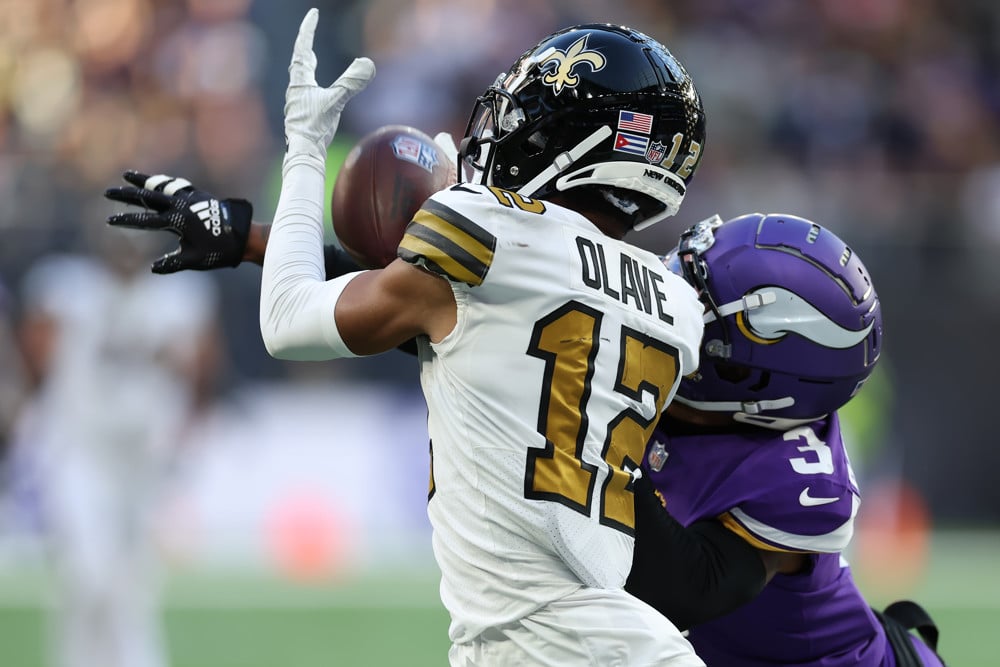 I turned out my pockets last week in DFS. Turns out that having Austin Ekeler and Rashaad Penny exploding in a bunch of snowflake-addled lineups does not lead to a profitable week. I was fortunate to place sixth in a PGA tournament on DraftKings, so I won’t be depositing anytime soon. The SGPN DFS team will do better. It begins with a fascinating NFL main slate for Week 5.

My player pool building process is locked in this season, with varying results in lineup construction. The DFS Flowchart is my method for putting my convoluted thoughts into a visual model. It serves as an aid to remembering what has passed through my consciousness throughout the week leading up to Sunday.

The process begins with finding the most optimal stacks to maximize upside and lay a foundation on which to craft a winning DFS tournament entry.

The RB position is where I try to maximize points per salary dollar, regardless of projected ownership.

Leverage and value plays cement the finished product. Creative uniqueness wins DFS tournaments in every sport. With how cutthroat NFL DFS has become, it is even more paramount to leverage the field and seek out breakout performances that are not widely shared. Sometimes the chalk prevails, like in Week 4. Most DFS professionals blaze their trails and have signature core plays that are scoffed at until Sunday afternoon. Here is my train of thought for Week 5 on the main slate. 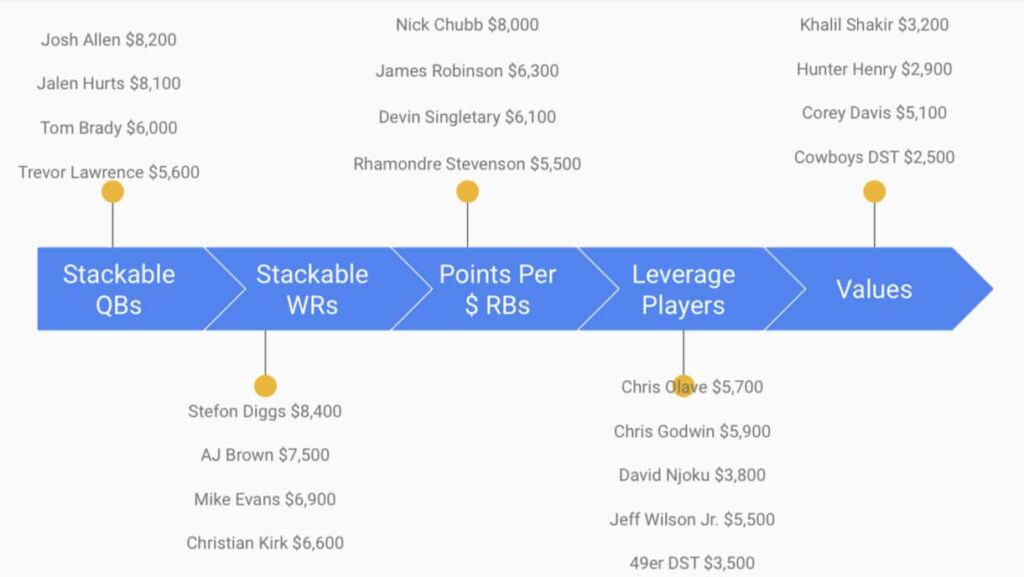 Yes, I will be returning to the well to fill my oaken pail with Josh Allen and Jalen Hurts stacks. As long as I have a full complement of value options to slot around those big-money players, the upside will be worth it.

Tom Brady quietly threw for 385 yards and three touchdowns in last week’s loss to the Chiefs and now brings his battered and weary troops back home to face the Falcons. Brady has been especially cruel to Atlanta since joining the Bucs, while an exposé of Arthur Smith’s incompetence is long overdue. I will be loading up on Evans and Godwin this week and running it back with Drake London.

Trevor Lawrence lost four fumbles last week and also tossed an interception against Philadelphia. Enter the hapless Houston Texans to cure what ails ye. The surprising Jags should demolish the fighting Lovie Smiths through the air with Christian Kirk and Zay Jones. I’m also partial to James Robinson getting back on track versus the worst tackling defense in the sport of football.

Trevor Lawrence through 4 games so far:

People will still call him bad after 1 bad performance today even tho he’s been Top 13 this year pic.twitter.com/8m4kmB2m0R

RBs Have the Meats

I simply cannot get enough of Nick Chubb this season. The best RB in the NFL has gotten even better this season and faces a Chargers front that is 30th at defending the position. There is also good reason to spend down $2k and play the Kareem Hunt negative game script narrative if you feel the Chargers will be ahead in this game.

I don’t think Devin Singletary is that good of a football player, but he is dominating the RB snaps in Buffalo nonetheless. He is a very versatile DFS play this week with plenty of upside as a standalone value, or included in a Bills stack.

Damien Harris and Rhamondre Stevenson are priced only $100 apart this week. It’s a cruel trick to play on single-entry DFS players, but don’t be afraid to include both of them in a multi-entry player pool. They draw the Detroit Lions and the worst defense in the NFL. Whether it be a hobbled Mac Jones or Western Kentucky rookie Bailey Zappe, the Pats will be running the absolute snot out of the ball and both RBs are incredibly viable.

The 49ers should handle business just fine in Charlotte against the pathetic Panthers. I will be stacking Jeff Wilson with the 49ers DST a lot this week for the dominance factor with correlating game script.

Drake London won’t be the only rookie receiver I build around in DFS this week. Chris Olave has been fantastic this season and likely won’t have to compete with Michael Thomas against Seattle. The Seahawks have struggled to cover good receivers this season, making their ranking of 9th versus opposing WRs very misleading. If Jameis Winston is active this week, Olave is going to the moon.

I like the makeup of Bills’ rookie WR Khalil Shakir. Smart players hang around the league for a long time and the Boise State grad is a coach’s dream. Jamison Crowder is unfortunately out for the season and Isaiah McKenzie is dealing with a concussion. Shakir checks in at $3.2k this week as a wonderful stacking option with Josh Allen and Stefon Diggs versus an awful Steelers secondary.

Chris Olave all targets and receptions from Week 3.

Two years from now we are going to look back in awe at this 2022 WR class. pic.twitter.com/ObLjzEFx7K

Young skill players get all the attention, especially with the growth of dynasty leagues. Sometimes the best plays are the wily, trustworthy veterans. Don’t get me wrong, Elijah Moore and Garrett Wilson are fantastic talents for the Jets. The problem is that Zach Wilson is an old soul and prefers the company of Corey Davis. He is sandwiched between them in salary and completely ignored in DFS. When he is the most-targeted Jets WR again this week, refer back to this paragraph.

Hunter Henry is not producing the same touchdown frenzy as last year. This week could spell a return to that miraculous purity. Mac Jones is gimpy. Bailey Zappe is green and Jonnu Smith is out with an injury. At $2.9k on DraftKings this week, a touchdown (or two) from Ole Reliable would go a long way toward an optimal DFS lineup build.