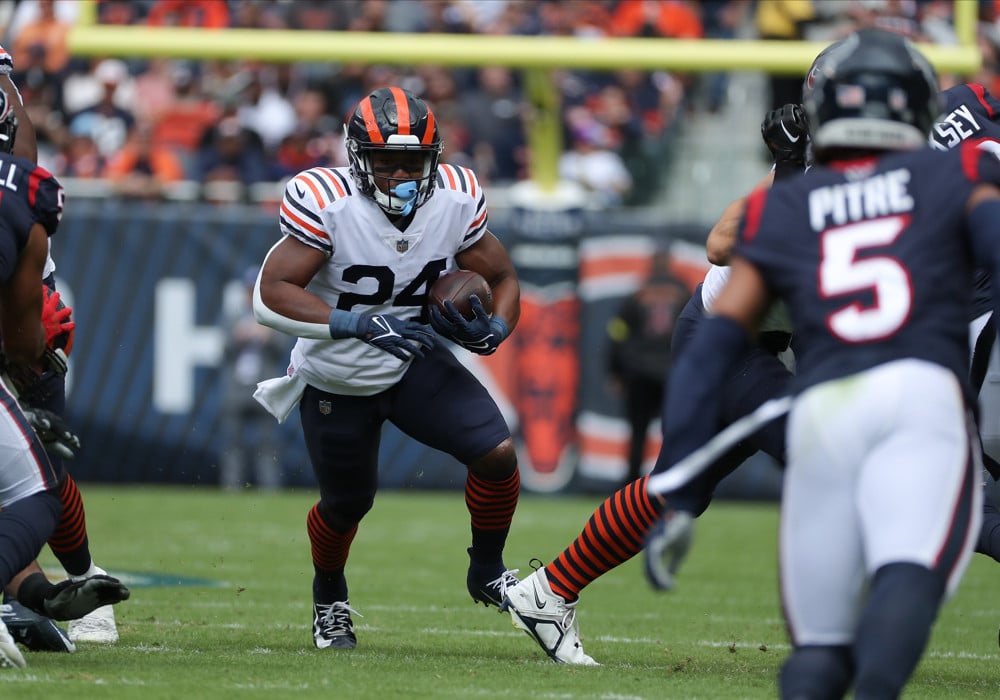 CHICAGO, IL – SEPTEMBER 25: Chicago Bears running back Khalil Herbert (24) runs the ball up the middle during a game between the Houston Texans and the Chicago Bears on September 25, 2022 at Soldier Field in Chicago, IL. (Photo by Melissa Tamez/Icon Sportswire).

We’re three weeks into our quests to achieve the fantasy football championship. However, maybe it hasn’t gone as planned. Or maybe you just need some insurance on your bench. Either way, you’re ready to look for week four waiver wire targets that can help your team. Luckily, we have you covered. Even though injuries to players like David Montgomery and Dalvin Cook aren’t expected to be serious, a little insurance is never a bad idea.

The following players could help your fantasy football team or provide you with the depth you need to navigate through injuries. The good news is, per Sleeper, these players are available in over 50% of leagues. And don’t forget to tune in to the Sports Gambling Podcast Fantasy Football Podcast channel Tuesday morning for Old-Fashioned Football, where they’ll break down more waiver wire targets.

David Montgomery has been the leading rusher for the Chicago Bears. However, Sunday he left the game with an undisclosed knee/ankle injury. While the initial prognosis on Montgomery’s leg has come back positive, he still may miss time. Even if he doesn’t miss time, the Bears have run the ball more than any other team in the NFL based on percentage of plays. Khalil Herbert came in on Sunday after Montgomery got hurt and ran the ball 20 times for 157 yards and two touchdowns. He has looked really good even as a backup running back for the Bears and should continue to stay involved even if Montgomery doesn’t miss time, making Herbert a great week four waiver wire target.

Khalil Herbert nailing his audition to be the Bears starting RB in 2023.
pic.twitter.com/ZHgDdfxu4T

Opposing defenses know they need to bottle up Davante Adams and Darren Waller. However, that doesn’t completely limit the Raiders’ offense. Derek Carr has had to look elsewhere to move the ball down the field. This week he found that in Mack Hollins. One week after receiving 21% of the target share, Hollins followed it up this week 24% of the target share. If you need help at wide receiver, Mack Hollins is an excellent week four waiver wire target because he’s starting to show some consistency. This week he finished with eight catches on 10 targets for 158 yards and a touchdown. The Raiders are going to continue to throw the ball and Hollins is showing he can be a consistent playmaker.

Maybe you are still trying to recover from losing Dak Prescott or Trey Lance. We’ve been waiting for some lesser rostered quarterbacks to step up and have a good game and that’s exactly what Geno Smith did this week. In the Seahawks’ loss to the Falcons, Geno Smith had 32 completions on 44 attempts, 325 yards, and two touchdowns. Quarterbacks on the free agency have not been putting up huge numbers, but Smith showed a glimpse of connection with the Seahawks’ receivers that could make him the week four waiver wire target you need to stream quarterbacks or as backup depth.

If you’re still looking for some wide receiver or flex help DeVante Parker showed this weekend why he should be considered for your week four waiver wire targets. In a game against the Ravens, the Patriots had 32 completions. Ten of those targets went to DeVante Parker, good enough for 31% of the target share. Parker was able to bring in five of those targets for an amazing 156 yards. The Patriots haven’t had any receiver really step up, but after averaging 30 yards per catch, Parker may be showing that he is that guy. This was the first week Parker has had over 10% of the target share, however, maybe he has built a trust with Mac Jones now.

DeVante Parker having yourself a day!! pic.twitter.com/boGYaTLuVs

The Minnesota Vikings have a pretty good passing attack and that includes KJ Osborn. While defenses are focusing on trying to stop Justin Jefferson and Adam Thielen, they have trouble covering all three, leaving KJ Osborn open. This weekend Osborne finally had a game that reflected some of the great play we saw last year as he had five catches on eight targets for 73 yards and a touchdown. The Vikings are going to continue to throw the ball in their new offense, with Kirk Cousins almost averaging 40 passes per game. Expect Osborne to stay involved and relevant, not to mention be excellent depth in the event Jefferson or Thielen suffer an injury, making him a good consideration for the week four waiver wire.

Zay Jones finally accomplished this week what he hadn’t the past two. Scored a touchdown. However, Jones has been involved in the Jaguars’ offense all year, getting 24% of the target share in Week 1, 13% in Week 2, and now 29% this week. He had ten catches on 11 targets for 85 yards and a touchdown. The Jaguars are another team that is throwing the ball a lot and Zay Jones is emerging as the second option in the passing game behind Christian Kirk. If you need wide receiver or flex help, you may want to consider Zay Jones when looking at your week four waiver wire targets.

This is more of a dynasty stash, however, somebody you could consider for your week four waiver wire targets is Jelani Woods. Woods, a rookie out of Virginia, may have only had three targets and two catches for 13 yards, but he scored two touchdowns. Woods has great size and skill, and if Matt Ryan continues to look his way in the redzone he could continue to make an impact this year. However, being just a rookie, Woods holds good value in deeper dynasty leagues as he continues to develop and gain the starting job on the Colts. He’s a 6’7″ big-bodied guy who can get open in the redzone. And frustratingly enough, he has more career touchdowns than Kyle Pitts.

Rookie Jelani Woods had his first two career touchdowns today including the game winner! Have a day #80! pic.twitter.com/IArr8gJ6Bt