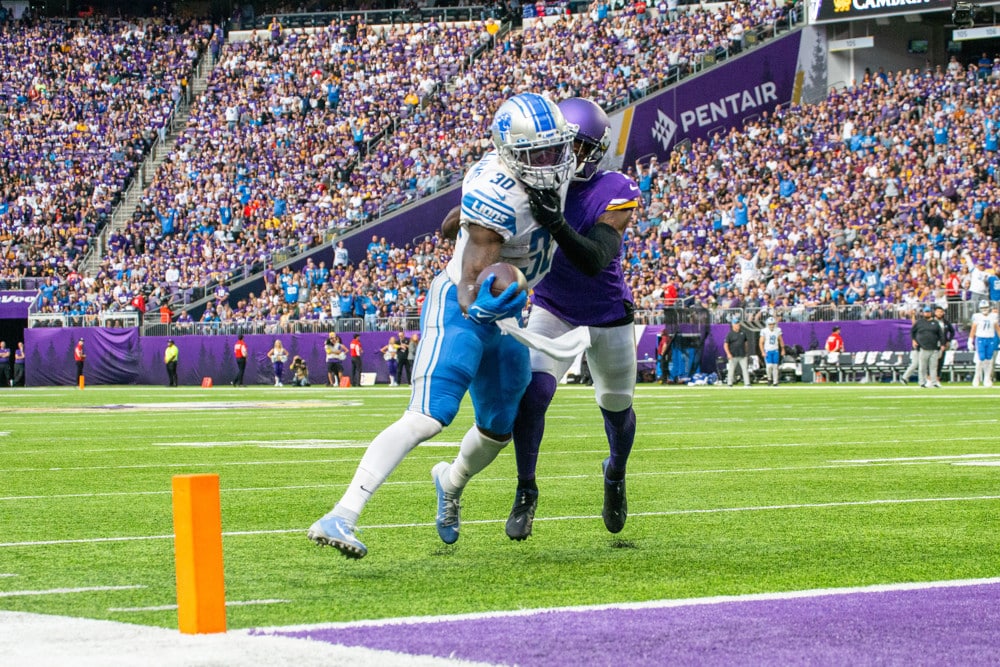 Fellow fantasy managers, we have made it through the first three weeks. It’s been a rollercoaster ride, to say the least! Week 4 is here, and the waiver wire could be a blessing in disguise. There are some serious values still sitting out there! There are also some landmines on the waiver wire that you need to avoid as you allocate FAAB in Week 4.

You may be asking yourself, “how do I know which is which?”. Luckily for you, we have done the work and have taken a drive into the fantasy wasteland to find you a few gems, mid-tier values, and potential fliers for you to target this week. Fear not, friends; we will prevail!

By now, we have most likely identified the players who are actually a part of a team’s game plan and who the coaches just hyped up during the pre-season to what feels like fool us. Don’t beat yourself up for drafting some of these players who we thought would be more involved. You took a shot, and it just hasn’t worked out; that’s fantasy football for you.

As I tell my son, “You can always give it another try”. That is what the waiver wire can do for us, allow us to correct some mistakes, fill in for injured players, and take another shot at providing our team with some depth or starting caliber players. Now let us dive into the fantasy football Week 4 FAAB Cheat Sheet.

For some reason, the Bears are choosing not to throw the ball very much. Not sure if they don’t trust Justin Fields or if Matt Eberflus and Luke Getsy are drawing up terrible passing game plans. Either way, they are leaning on the run game, and this bodes well for David Montgomery and Khalil Herbert.

Herbert took advantage of Montgomery leaving the game early with an ankle/knee injury. Rushing for 157 yards and two scores on 20 attempts and adding two receptions for 12 yards. That output is not going to be the week-in and week-out expectation, but he did show the ability to be explosive and reliable when called upon.

Montgomery’s injury status has been listed as “Day-to-Day.” Even if he is able to go this week, I doubt he will be 100%, and likely won’t have a full workload. Herbert should have standalone value this week as they take on the Giants and could have massive appeal if Montgomery misses more time than we think.

Put some respect on this man’s name! With D’Andre Swift in the game, Jamaal Williams played 45% of the snaps and put up a stat line of 20 rush attempts for 87 yards and 2 TDs while adding two catches for 20 yards. Now that Swift looks like he will miss some time with a shoulder injury, Williams is set up to see a majority of the workload and will have a chance to show the world what he can do as the lead back!

Williams already has a steady role in this offense and could feast on the Seahawk’s defense next week as they just let up 141 yards and a touchdown to Cordarrelle Patterson. Let’s keep close tabs on the Swift injury because the Lions will want to keep him from getting further injured when he does come back, which could elude to a snap count for a few weeks as well. Williams is worth your FAAB dollars ahead of Week 4.

It’s most likely a stretch that he is still available on your waiver wire, but I didn’t want to exclude him from the article because I do see him available in a couple of my leagues, and he is worth the FAAB.

Chris Olave just took the NFL world by storm this week with nine receptions on 13 targets for 147 yards. He has seen an uptick in usage each game this year, with a snap count of 74% in week 1, 75% in week 2, and 77% in week 3. He is averaging a whopping 10.37 yards per target so far this year, on top of averaging almost ten targets a game!

With Michael Thomas(foot) and Jarvis Landry(ankle) leaving the game early this week, the doors opened up for Olave to shine! I have not seen any injury updates for Thomas or Landry, but if either one of their respective injuries is an ongoing issue, then Olave has an even bigger opportunity for fantasy stardom. The Olave rocket ship is taking off; you want to get on it if you still can!

Chris Olave was the only bright spot today. The kid is legit! pic.twitter.com/EWgU9cbPSp

Best known as the handcuff to the injury-prone Dalvin Cook, Alexander Mattison once again has a chance at more work, with Cook getting banged up and leaving the game in week 3 with a shoulder injury. Cooks dislocated his shoulder in the fourth quarter against the Lions, and his status is “Day-to-Day.”

Now It doesn’t currently sound like he will miss any time but Cook reinjuring his shoulder is not a good sign for him moving forward. The Vikings may want to be a little more cautious with Cook because if they are truly going to make a playoff push this year, then they will need Cook in their lineup.

Mattison is one of the league’s better backup running backs and deserves to be rostered, even if you are just stashing him on the bench, just in case Cook misses sometime down the road.

Romeo Doubs lead the Packers in receiving yards, targets, and catches in week 3, posting an eight reception, 73 yards, and one touchdown performance. He fully took advantage of his increased role with Sammy Watkins and Christian Watson being sidelined this week with injuries.

I’m not expecting him to lead the Packers in targets every week, but it’s not out of the realm of possibility that he can establish himself as the wide receiver two on the team sooner rather than later. When Watkins and Watson get back on the field, they can garnish some targets away from Doubs but what I saw from Doubs on Sunday suggest that he is gaining Aaron Rodgers‘s trust, and we all know that is a good thing. He’s a player I couldn’t leave off the FAAB cheat sheet and warrants spending some FAAB on in Week 4.

Ever since preseason Zay Jones has been getting glowing remarks and started to build a connection with Trevor Lawrence the moment he set foot on the field. That connection has rolled over into the regular season, and he’s delivered multiple double-digit fantasy finishes. Week 3 was one of those times when he has ten receptions on 11 targets for 85 yards and a touchdown. Jones has definitely established himself as the WR 2 on the Jaguars.

With the Jaguars showing the willingness to throw the ball(even when leading) and Trevor Lawrence having trust in Jones, I believe that his production could last all year. If Christian Kirk were to ever go down with an injury, Zay Jones could become a target monster.

It’s better to use some FAAB in Week 4 on him before his price tag goes up with another fantastic performance.

David Njoku had a fantastic game in the bright lights on Thursday Night Football! Getting ten targets and posted nine receptions, 89 yards, and one touchdown performance. We should have seen this breakout performance coming, right? Njoku had played 89% and 94% of the offensive snaps the first two weeks but only had six targets. His snap share can provide fantasy relevance by itself, but the production he puts behind the usage is great!

The tight-end landscape is once again desolate. Njoku’s snap share, targets, and the fact that the Browns really don’t have a true WR2 make Njoku a low-end TE1.  Don’t forget that DeShaun Watson will also be back this season, and I believe that Njoku could become a favorite target for Watson.

David Njoku with the big catch for six!

With every passing week, Brian Robinson‘s return gets closer and closer. This past week he returned to practice and was also on the field prior to the Commander’s game against the Eagles and was running routes. This guy has just shot 29 days ago! It’s amazing how far he has come in his recovery in such a short time.

Before the shooting, Robinson was on his way to being the starting running back for the Commanders. He had played very well in the preseason and shown that the Commanders could rely on him, especially around the goal line.

Robinson can return in Week 5. However, there’s no guarantee that he’s ready to play by then. It’s as good a time as any to grab him now before people realize he can come back soon and stash him on your bench or an IR spot. He could be a league-winning FAAB acquisition in Week 4.

Isaiah McKenzie had an increased workload this week, with Gabe Davis just coming back after dealing with an ankle injury. It looked like Davis wasn’t 100%, and I think the Bills knew this going in. McKenzie posted a seven-catch, 76 yards, and one touchdown game on nine targets.

The Bills like to throw to their slot position player and McKenzie usually lineups there when he is on the field. McKenzie took 43% of his snaps from the slot in 2021, so the experience isn’t what he’s lacking, just opportunity. When given the chance, he’s excelled. He’s averaging an offensive snap share of 48%. This has increased every week this season so far.

McKenzie has shown flashes in the Bills’ offense when given the opportunity, and I believe that he could turn into a nice bye-week replacement WR for you. If Gabe Davis’s injury lingers or hampers him throughout the season, McKenzie could see a rise in target share and offensive snaps. He’s worth a few of your Week 4 FAAB dollars.

There isn’t too much to say about Kenny Pickett. He looked decent in the preseason and could be useful in 2QB or super-flex leagues if given the opportunity. The bigger story here is how bad Mitchell Trubisky has looked through the first three weeks. The Steeler fans are literally chanting for Pickett to start. I think the writing is on the wall for Trubisky, and it’s only a matter of time.

You can grab him now for a small amount of FAAB and be ahead of the crowd before the Steelers decide to give the rookie a shot.