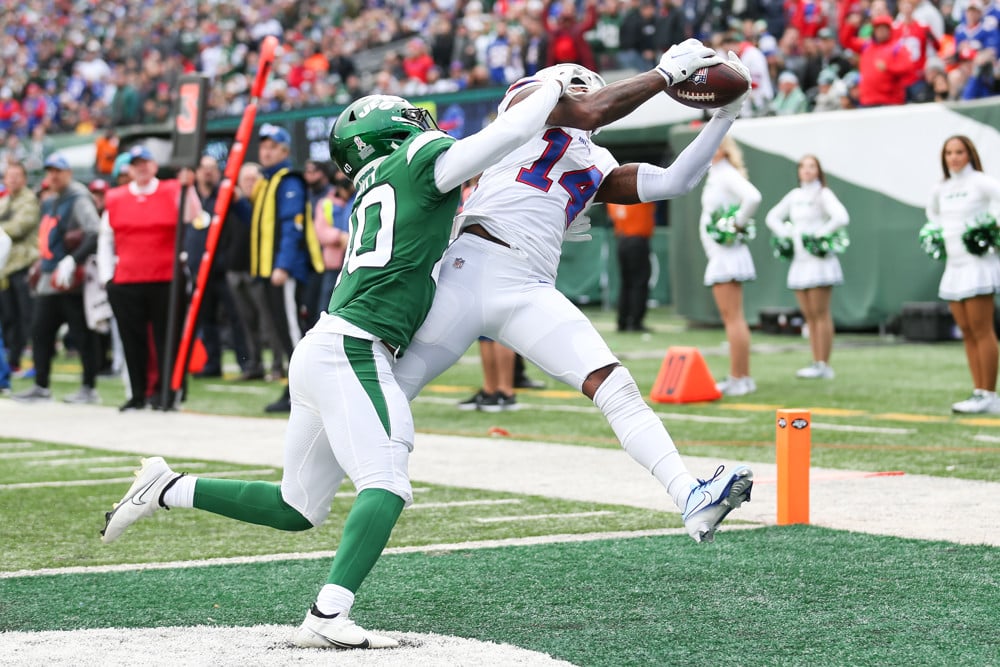 EAST RUTHERFORD, NJ – NOVEMBER 14: Buffalo Bills Wide Receiver Stefon Diggs (14) makes a catch for a touchdown during the second quarter of the National Football League game between the Buffalo Bills and the New York Jets on November 14, 2021 at MetLife Stadium in East Rutherford, NJ. (Photo by Joshua Sarner/Icon Sportswire)

The NFL is back, and so are NFL DFS Showdowns! After a long offseason, the L.A. Rams return home to raise the championship banner and welcome in this year’s Super Bowl favorite (+650) the Buffalo Bills. The Bills enter this matchup as the road favorite (-2.5) with an over/under of 53. Vegas expects this to be a high-scoring affair with two explosive offenses on the field. The Bills ranked 5th in yards per game in 2021 averaging 381.9, while the Rams checked in at 9th with an average of 372.1. We’ll take a look at some of the best bets and fantasy players for this NFL DFS showdown.

They're the first team he faces as a member of the @BuffaloBills. 👀

Diggs is coming off a 103 reception, 1,225 yards, and 10 touchdown effort in 2021. The 28-year-old is the clear-cut number one receiver for this explosive Super Bowl favorite. Gabe Davis and Dawson Knox both had their flashes in 2021, but there is no doubt Diggs is the main target for Quarterback Josh Allen. Cooper Kupp got the triple crown last year, and Quarterbacks are hard to pass up on. However, The savings you can get by jumping down to the fourth option on the board will help round out the DFS roster that much more. Diggs also figures to be a little less rostered than the top-3, giving us an edge in the numbers.

The obvious stack here with Diggs. Allen is one of the best fantasy quarterbacks in the league. You almost always need to have at least one Quarterback in your showdown lineups, it’s almost impossible to win without one. Not only does Allen provide huge passing numbers (4,407 yards and 36 touchdowns in 2021) he also brings massive rushing upside (122 rush attempts, 763 yards, and 6 touchdowns in 2021). The 6’ 5” 237-lbs Quarterback can move. With Aaron Donald chasing after him, Allen will most likely get his scrambles in this game.

Cooper Kupp became the first Wide Receiver since Steve Smith of the Carolina Panthers in 2005, and only the fourth in history, to score the league’s “triple crown” in receiving. Kupp led the league in Receptions (145), receiving yards (1,947), and touchdowns (16). The marks he set for both catches and yards were the second-most in NFL history. Michael Thomas (149 catches in 2019) and Calvin Johnson (1,964 in 2012) are an elite group to join. Its well-known Quarterback Matthew Stafford and Kupp are great friends both on and off the field, notably creating the “breakfast club” and enjoying the first meal of the day together. Kupp might not match his 2021 numbers. However he will get his fair share though, and with Matthew Stafford’s elbow just maybe not being 100%, Kupp is the ideal safety blanket.

With big question marks surrounding the Ram’s running game going into 2022, Henderson Jr seems like the obvious choice for value when you compare him to his backfield mate Cam Akers ($8,000). While Akers may start the game, he has battled “soft tissue” injuries throughout the preseason. Akers returned to the team in week 18 of 2021 after tearing his Achilles before the season. In the four games he played including the Super Bowl, Akers did nothing to inspire great trust. With questions already I think the Rams will use the two Running Back approach and split the carries. Give me the cheaper option with some goal-line carry potential to vault this lineup to the top.

James Cook should be the the 3rd RB off the board in rookie drafts. He has shown the ability run inside at UGA, now plug Josh Allen in & the bills offense, and this zone read will be deadly!

Easily could have the most FF points in this class year one. #FantasyFootball pic.twitter.com/DFW2vJGfVk

Talk about uncertainty at Running Back. It’s been a while since the Buffalo Bills have had that top Running Back that you know will control the game. This one is a little bit of a gamble, Devin Singeltary showed a few flashes late last year. However, in the off-season, the Bills made it clear they weren’t happy at the position. After signing J.D Mckissic in the off-season, Mckissic chose to stay with the Washington Commanders instead. The Bills then turned to the NFL draft. James Cook, younger brother of Vikings superstar Dalvin Cook, became their target player. He was selected with the No.63 pick in the second round of this April’s draft. Some have compared Cook to Saints star Alvin Kamara. Cook figures to get plenty of use in week 1 as the Bills try out their new young talent Again at the price, he’s a risk worth taking.

Picking a kicker isn’t a very sexy thing to do. That doesn’t mean that it isn’t smart though. Matt Gay was one of the best and most consistent fantasy kickers in 2021. We expect this to be a high-scoring game, so yes take some dart throws at a guy you hope can grab a touchdown and break the bank. If you want old reliable Matt Gay is here to help you. Scoring as many as 15.0 points in a game last year, the spread points towards a close game. The over points toward a high-scoring game. In both a close game and high scoring game, the kicker is going to come into play even more.

Thanks for checking out another article highlighting this NFL DFS Showdown. For more best bets and fantasy picks check out SGPN daily for new content.