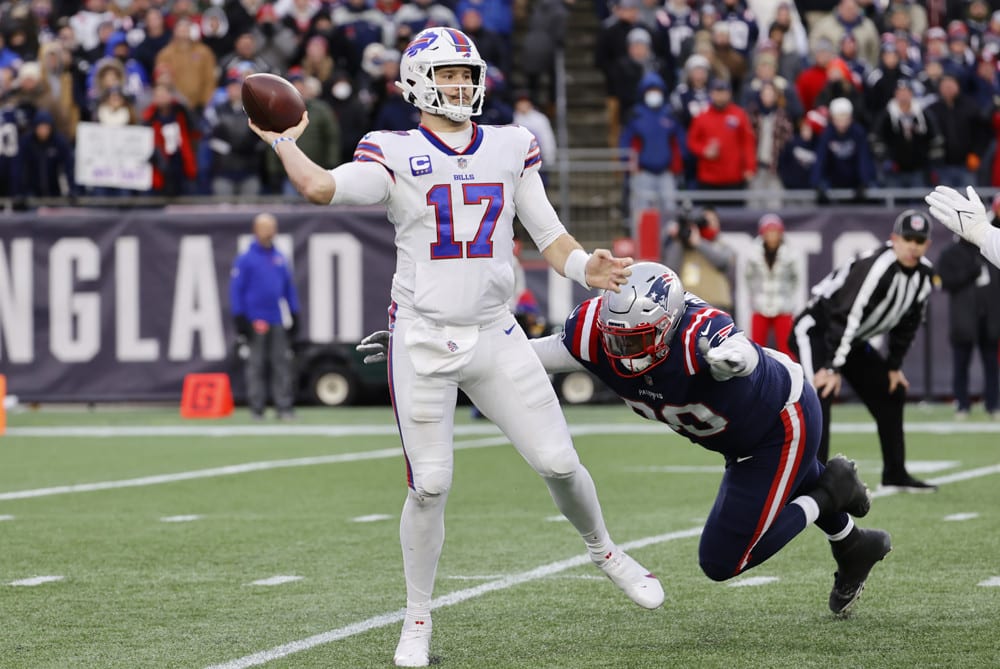 FOXBOROUGH, MA – DECEMBER 26: Buffalo Bills Quarterback Josh Allen (17) gets rid of the ball as New England Patriots defensive lineman Christian Barmore (90) moves in during a game between the New England Patriots and the Buffalo Bills on December 26. 2021, at Gillette Stadium in Foxborough, Massachusetts. (Photo by Fred Kfoury III/Icon Sportswire)

The Pre-season has kicked off! This means the NFL regular season is right around the corner. Now is the time of year to place all of your futures bets and give yourself something to constantly keep an eye on for the entire season. There are many great ways to have futures bets out there.

Player props and Super Bowl winners are a few fun ones. Today we’ll take a look at the 2022 AFC East division. Each team’s wins total, gives an over/under play, and find the best value in the division. All lines are courtesy of WynnBet.

In 2021 the Buffalo Bills won the AFC East title for the second year in a row. Before that the Tom Brady-led New England Patriots had won the AFC East 11 seasons in a row and 17 of 19 seasons before that. After Brady’s move to the NFC South, the division has been turned over to the Bills but has allowed for much more parity. Looking forward to 2022 a case can be made for every team in this division to make the playoffs.

In 2021 the Buffalo Bills were set at 11 wins to open the season. They pushed that bet as they went 11-6. Good enough to win the AFC East. The Bills have won 10 games or more for three straight seasons, including 13 wins in 2020. After smoking the Patriots in the wild-card round, the Buffalo Bills lost a close one in overtime to the Kansas City Chiefs in the divisional round.

Now in 2022, once again, they are the favorites to win the division. Not only are the AFC East favorites, but they are also the favorites to win the Super Bowl (+650). Offensive coordinator Brain Daboll left the position to take over as head coach for the New York Giants. Ken Dorsey was promoted to take over the job. Star Defensive End and two-time Super Bowl champion Von Miller signed a six-year deal with the team in free agency, as well as Tight End O.J. Howard.

“The door is open for @obj to come to the Buffalo Bills & him coming here would really put us over the top” ~@VonMiller#PMSLive #BillsMafia pic.twitter.com/EcuK7P8GSa

First-round pick Defensive back Kaiir Elam and Second rounder, Running Back James Cook (younger brother of Dalvin Cook) should also make instant impacts. The Bills probably aren’t worth laying the juiced-up number to win the AFC East, and at 11 wins, it would be easier to take the over. In a division where teams beat up on each other and play a first-place schedule, it’s hard to get to 12 wins for them in 2022.

In 2021 the Miami Dolphins were 9-8 and finished third in the AFC East. In a roller-coaster season, they started the year 1-0 before losing 7-straight games.

Then in a wild turn of events, they won their next 7-straight games. On January 5th, in an absolutely shocking move, the Dolphins fired Head Coach Brian Flores. Going to the Shanahan coaching tree, they hired Mike McDaniel.

Now entering 2022, they’ve been covered in scandals. Fired Head Coach Brian Flores sues the NFL and three teams, including the Dolphins, alleging racism in their hiring practices. Fast forward to August, and the NFL suspends team owner Stephen Ross and takes away their first-round pick in 2023 and third-rounder in 2024. All of this comes after an investigation revealed the Dolphins tampered with both at the time Patriots Quarterback Tom Brady and Saints Head Coach Sean Peyton.

An attempt to bring both to south beach to work for the Dolphins. On the football side of things, the team brought in speedy Wide Receiver Tyreek Hill, Linebacker Melvin Ingram, and Running Back Chase Edmonds. Coming off of 10 wins in 2020 and 9 in 2021, with a new Head Coach and all the turmoil in the building. This is a team I cannot get behind, no matter what Tyreek says about his Quarterback.

The 2021 New England Patriots had something they hadn’t in a very long time. For the first time since Drew Bledsoe in 1993, they rolled out a rookie Quart to start week 1. For Patriots fans, Mac Jones did not disappoint. Leading the team to a 10-7 record, second in the AFC East.

A berth via Wild-card in the playoffs that’s the part the Patriots fans may want to forget. The 47-17 walloping in the wild-card round handed down from division rival Buffalo. For the first season with the rookie and only the second season without 7-time Super Bowl-winning Quarterback Tom Brady, though, a successful step towards the next generation of the Patriots team.

The 2022 New England Patriots lost offensive coordinator Josh Mcdaniels to the Las Vegas Raiders, a job too good to say no to after the untimely firing of Jon Gruden. Leaving the patriots with no named offensive or defensive coordinator now in Bill Belichick’s confusing system. If we’ve learned anything over the years, though, it’s don’t question the mad scientist that is Bill Belichick. Speaking of which, the Patriots made a “strange” pick in round 1 of the NFL Draft, selecting Cole Strange at offensive guard.

Malcolm Butler returns to the team for 2022, along with Tackle Trent Brown, and Devante Parker appears to be the new No.1 option at Wide Receiver. If Mac Jones stock is trending up, which I am a big believer in. And we can always trust the legendary Belichick to figure things out. It makes the Patriots the easiest team to bet on. The Bills are prohibitive favorites, but there is value in betting the Patriots (+450) to win the division. They only finished one game behind Buffalo last year.

The 2021 New York Jets season was the first for both rookie Head Coach Robert Saleh and rookie Quarterback Zach Wilson. A rough first season, but the expectations were low going in. A win total of 6 going into 2021 was clear under as the team went 4-13. Wilson only started six of the games, five of which were losses.

In 2022, the Jets easily had the most impressive draft class in 2022. Lockdown Cornerback Ahmad Gardner at No.4 overall, Stellar Wide Receiver Garrett Wilson at 10, and projected top-10 pick in Edge Jermaine Johnson at 26. Later in the draft, they get arguably the best Running Back in Iowa State’s Breece Hall.

.@ZachWilson with the smooth side arm throw to @e_moore03 👀

They added a Tight End weapon in CJ Ozomah, Defensive Back D.J Reed, and Safety Jordan Whitehead and brought back Super Bowl-winning Quarterback Joe Flacco to continue to mentor young Zach Wilson. The pieces are there now to see if the Jets can just avoid being the Jets and put it all together.