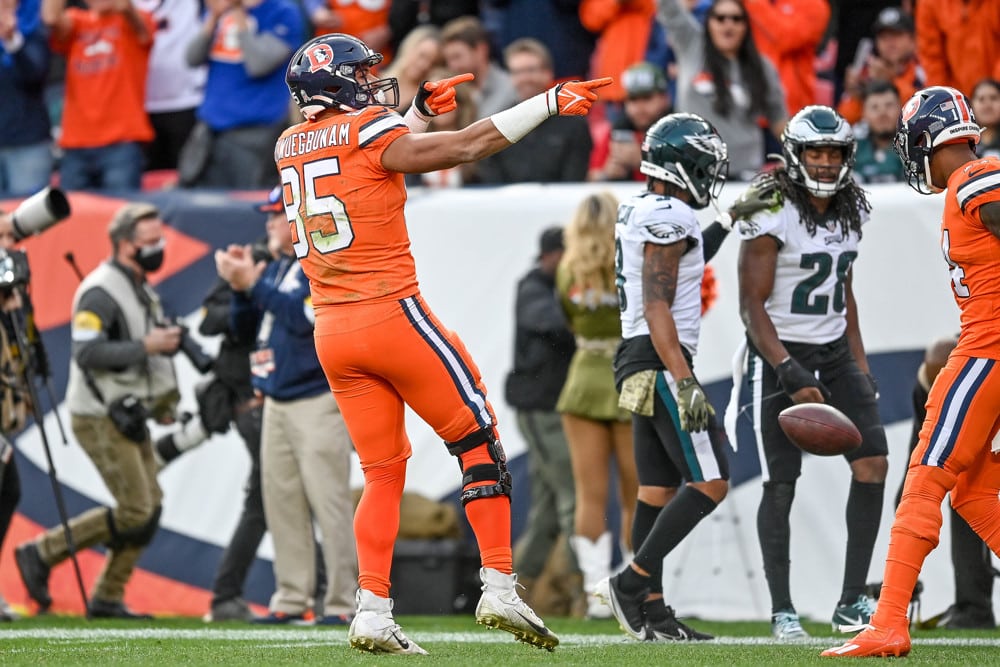 DENVER, CO – NOVEMBER 14: Denver Broncos tight end Albert Okwuegbunam (85) celebrates after a 65 yard reception during a game between the Denver Broncos and the Philadelphia Eagles at Empower Field at Mile High on November 14, 2021 in Denver, Colorado. (Photo by Dustin Bradford/Icon Sportswire)

This has been one wild and crazy NFL offseason.  The dynasty landscape has changed about 100 times and could continue to do so.  We have had major Quarterback trades, young Wide Receivers traded, and truly unprecedented moves.  We have 10 new head coaches as well as 13 new offensive coordinators.  Dynasty rankings have been changing and evolving with every move.  They still aren’t done yet either, however, I wanted to share my thoughts on some of the dynasty football risers and fallers of the 2022 NFL offseason.

The 49ers have made it very clear that this is Trey Lance’s team. The confidence they are showing in him makes me more confident in him as well. I love the fact that he got to wait a year and learn the system. I also love that he is in a great situation. Most top rookie Quarterbacks end up on bad teams with new head coaches. This is a perennial playoff team with a tenured head coach with one of the best rosters in the league. Trey Lance should thrive in this offense and this will result in solid fantasy production. The offense itself has a great floor as we saw with Jimmy Garoppolo. Lance’s rushing upside combined with his arm strength offers the ceiling that we are all looking for. I simply love Trey Lance.

Read my thoughts on @The33rdTeamFB site, debate me in the commentshttps://t.co/OwxB66cadT

Deshaun Watson quickly moved back up a lot of boards when the 6 game suspension was announced. This only lasted 2 days before the NFL appealed. Now rumors are swirling that the league is pushing for an indefinite suspension. We could see a situation where they agree on a 9 or 12-game suspension. He could start a few games and then get suspended too. If he gets suspended indefinitely and he doesn’t start again until 2023, that will be over 2 years without playing football. This is just a situation I am encouraging people to avoid right now and my rankings reflect that.

Rhamondre Stevenson has already accomplished what very few NFL players ever have. He fought himself out of the Belichick doghouse. Belichick makes his players earn it, and only 1st or 2nd round picks usually see the field early. Stevenson shined when given the opportunities too. His rookie resume was impressive even without considering he didn’t start getting playing time until halfway through the year. Stevenson was 5th in the NFL with 2.29 yards per rush after first contact. Stevenson is already running with the first team in training camp, and Harris is in the last year of his contract.

I’ll start by saying I’m not concerned with the weight. It looks like Leonard Fournette is already getting back into shape and will be at a good weight when the season starts. My concern is that he has a real threat behind him in Rachaad White. Unfortunately, Fournette was not very efficient last season. He was able to compile a lot of fantasy points through passing volume though (84 targets in 2021). I think White can eat into that as early as next year. I also look at his two-year contract. What if he is tied to the Buccaneers next year and they do not have Tom Brady? What will that look like? His touchdown opportunities will go down, and the team could turn to White as they rebuild. Fournette is at the end of his contract and will turn 28 this coming January.

Michael Thomas has fallen quite a bit in rankings and the concerns are validated. Thomas no longer has Drew Brees and Sean Payton, and the team also finally has some potential other receiving options. So why am I bringing him up the rankings? Thomas is still just 28 years old and has shown elite upside that only a handful of players have. Thomas is still on a good offense and Jameis Winston has supported multiple top fantasy options before. A lot of other Wide Receivers do not have this luxury. There is only hope that their Quarterbacks can support a single fantasy production.

Thomas now goes as the 30th WR off the board.

But here’s the thing…

DeAndre Hopkins has been one of the best players in the league for a long time. After being traded to the Arizona Cardinals, he continued that success until recently. Hopkins has missed games recently with some nagging injuries. During his recovery, he received a suspension that will cause him to miss the first 6 games of the season. Hopkins is 30 years old and is already showing some signs of regression. I would wait until he is cleared from suspension and then try to make a trade while his value is still depressed. Hopkins only averaged 57.2 yards per game last season. His fantasy points per game went from 18 in 2020 to 14.7 in 2021.

Albert Okwuegbunam saw a spike in his stock following the trade of Noah Fant. His stock took a hit though when they drafted Greg Dulcich in the 3rd round. This has been great if you are targeting him as his price tag just keeps getting better. Dulcich is a rookie Tight End and it is not often that one produces early. He also has been dealing with hamstring issues and has been limited in training camp. Expect to see Dulcich and Albert on the field together as this team is expected to run a lot of two Tight End sets.

I moved him up three spots following the injury to Tim Patrick. I was already excited about his potential in this offense and I think he will benefit most from Patrick’s injury. Albert O is not only bigger than Courtland Sutton, but he is even faster. He ranked tied for 3rd in targets per route ran for Tight Ends in the NFL last year with George Kittle and Darren Waller. In 2021 he was #2 in yards per route run since week 8 per Andrew Erickson of FantasyPros. This was all with Noah Fant on the team.

Mike Gesicki is currently being drafted as the 13th Tight End in fantasy drafts. Last year he had 73 receptions on 112 targets for 780 yards and 2 touchdowns. That was without Tyreek Hill in the offense. There are already concerns about how many fantasy options Tua will be able to support. Gesicki will be at least third in line for targets and a decrease in volume would be concerning. Gesicki also ranked 42nd with 3.2 Yards after the catch. There are other players I think can be more consistent options and have higher upside.

These are some of the biggest Dynasty Football Risers and Fallers of the offseason. Thanks for reading everyone and I look forward to releasing more fantasy football content on SGPN all August long.