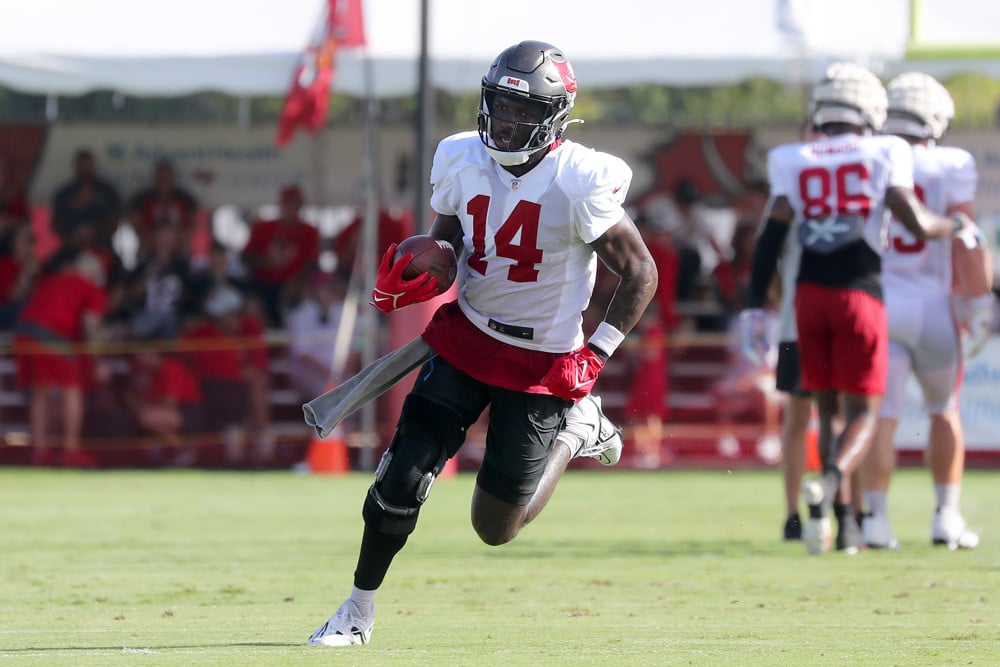 Underdog Fantasy Football has become one of the most popular fantasy platforms on the planet in just a short time. They are a sponsor, but even if they weren’t, we’d talk about them because they are a fantastic company.

Drafting fantasy football teams has never been easier than on the Underdog Fantasy app. Draft then, that’s it. No setting lineups, no waivers, no trading in a platform where your best players are inserted in your lineup every week. Nothing can be easier for the casual football fan who doesn’t want the season-long time commitment of a traditional league. For us avid fantasy football players, it’s fabulous as well, as you can draft all day long.

In this article, I’ll be highlighting some of my current favorite values in Underdog Fantasy Football drafts. These players are being drafted too low but this isn’t likely to stay that way for long. Draft these players now before fantasy managers become more aware of their positive situations as we get closer to the season.

Godwin has been going at a considerable discount all offseason due to a late-season ACL tear he suffered in December. Fantasy managers have looked at the recovery timeline of ACL injuries in the past and assume he will miss time in the regular season due to recent medical advances though players are returning more quickly than ever before. It was reported a few weeks ago that Godwin might not come back till November; however, he recently returned to practice and avoided the PUP list.

There are still legitimate concerns that he misses week 1, but this tells me he’s going to return sooner rather than later. Expect him to take the field by October, and don’t rule out him being on the field in week one as well. It will likely take him some time to return to form, but he’s being drafted as a WR3 on Underdog Fantasy Football as of now.

This is still one of the best Wide Receivers in the league, paired with the greatest Quarterback of all time. Godwin should be back in WR2 territory as soon as he’s inserted in the lineup. Combined with positive camp reports coming out of Tampa Bay, I don’t see any reason to justify his low ADP.

Thomas is another incredibly talented receiver who tumbled in fantasy drafts this year due to injury concerns. He missed the entire 2021 season and nine games the year prior due to various injuries. As a result, he’s being drafted as a WR3 this offseason, which is something I’m here to change. Thomas was recently activated off the PUP list, and all reports out of training camp indicate he looks fantastic.

This is a player who had 149 receptions for 1725 yards and nine touchdowns in 2019. He is two years removed from being fantasy relevant, though, and no longer has Hall of Fame Quarterback Drew Brees.

Nonetheless, similar to Godwin, he is simply one of the most talented Wide Receivers in the NFL. There isn’t a Wide Receiver that late in fantasy drafts with his kind of upside. Jameis Winston isn’t likely to be as efficient as Drew Brees, but he should be able to push the ball further downfield.

I have Thomas ranked as my WR22, and I will likely increase that further if he continues to look good in the preseason. Expect his ADP to rise considerably as we get closer to week 1.

Lazard is a player that I’ve been talking about all offseason as an incredible value. He doesn’t have any current healthy competition for the WR1 role in the Packer’s offense. Watson is currently on the PUP list, and I don’t want to hear about Romeo Doubs burning 3rd string Cornerbacks.

Lazard will be the top target in an offense that should still pass the ball a considerable amount despite a thin Wide Receiver core. Fantasy experts often criticize this argument, but who else is Aaron Rodgers going to throw to?

There simply isn’t anyone else to take on the considerable target volume. As a result, he’s one of my most rostered players on the Underdog Fantasy Football platform. While Lazard has been inconsistent due to a lack of target volume, he’s been very good with the ball in his hands.

He ranked number five in the NFL in fantasy points per target. His profile makes him a particularly great value in best-ball leagues. Fantasy managers can take advantage of the spike weeks with Rodgers but don’t have to deal with potential bust performances.

More than half of Allen Lazard’s targets last year came in the slot per PFF and he had a passer rating of 145.2 when targeted there.

That was the 2nd best mark among WRs with at least 30 slot targets.

The trend of highlighting players with injury risks continues. Stafford has an injury to his throwing shoulder that has bothered him throughout the offseason and has had trouble healing. The storylines highlighting his discomfort and calling it an odd injury for a football player has affected his ADP. He was the QB5 last season, leading one of the best offenses in the NFL.

No one likes to read about their Quarterback feeling injury discomfort due to injury. There is no indication though this should affect his play in 2022. The Ram’s offense will be one of the best yet again, and they feature one of the most talented skill position groups in the NFL. Unless this injury is far more serious than it appears, he will continue to be my favorite Quarterback value.

The Cowboy’s clear-cut second Wide Receiver is still undervalued as a WR5 on Underdog. There is no timetable on Michael Gallup’s return, as it was stated that he suffered complications after his injury. This kept him from getting surgery for over a month after the injury. Players are coming back faster than ever, but until we hear about a recovery timeline, we need to move Tolbert up our fantasy rankings.

He was highly productive during his final two seasons at South Alabama and boasts a 97th percentile College Dominator Score and a 96th percentile college target share.

Dak Prescott is still one of the better Quarterbacks in the league and will need a reliable target outside of Ceedee Lamb and Dalton Shultz. Even if he slides back as the WR3 upon Gallup’s return, he’s still well worth it in the 10th round of Underdog Fantasy Football drafts.

Jalen Tolbert has been listed as a starting WR on the Cowboys first unofficial depth chart. pic.twitter.com/BM84NtS9Tn