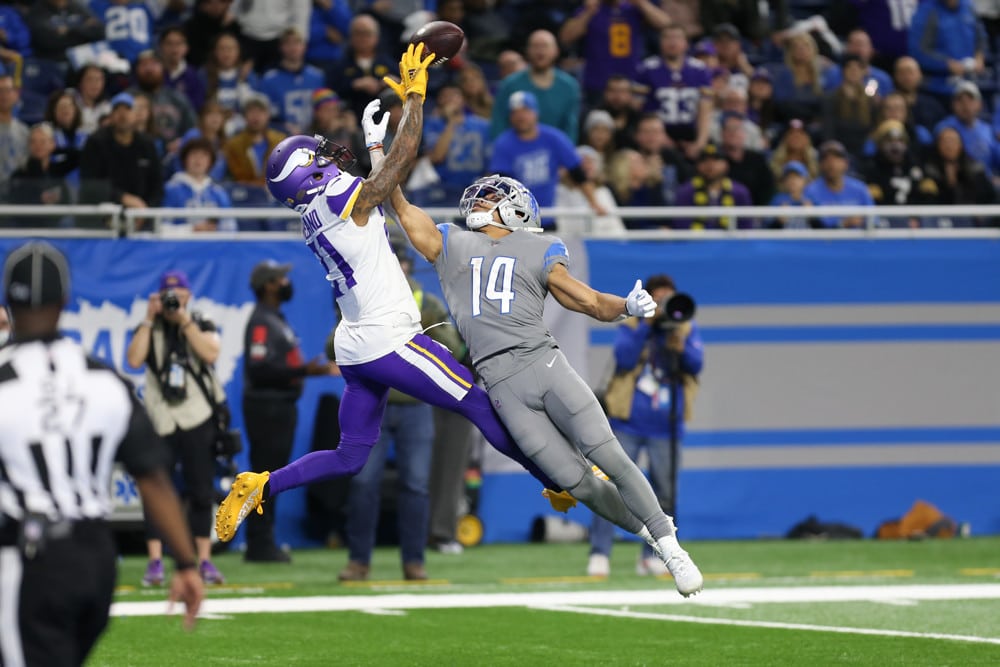 Najee Harris finished as the 3 rd overall running back (RB) in points per reception (PPR) formats. Javonte Williams (RB17) and Elijah Mitchell (RB26) both finished in the top 26 in PPR formats.

Ja’Marr Chase exploded onto the scene producing a 5th wide receiver (WR) overall finish. Jaylen Waddle and Amon-Ra St. Brown both finished as top 24 WRs. Devonta Smith finished just outside the top 24. Elijah Moore had a top stretch of six games where he was a top 10 WR.

The tight ends also did not disappoint. Kyle Pitts had over 1,000 receiving yards, while Pat Freiermuth caught 60 balls and seven touchdowns. These numbers are tough to put up as a rookie; it will be even more difficult to repeat as a sophomore. Let’s look at some potential sophomore slump candidates.

There are a few reasons why I think Mitchell can be a slump candidate. The first is his lack of involvement in the passing game. Mitchell only had 20 targets in 11 games last year. Not only that, but the team is moving to Trey Lance who can run the ball. Historically, rushing quarterbacks do not pass the ball off to running backs often.

Between Trey Lance, Deebo Samuel, and the rest of the RB room he has to contend with plenty of competition for goal line carries. Lastly, his health is a concern. One of the reasons he was a 6th-round pick was his smaller frame. At 5’10, 200lbs he is not the prototypical 3-down back. The 49ers also used a 3rd round pick on Tyrion Davis-Price.

His landing spot on the RB-needy Jets helped boost his stock. The Jets drafting Breece Hall early in the 2nd round of this NFL draft should put any hopes of Michael Carter being an every-week starter to bed.

If anyone thinks he is going to be a Nyhiem Hines or James White type of player is loosely based on his size and pass-catching ability. Scheme and situation point to the fact this is not the case.

His snap counts went up starting week 11 at 85% and his production soon followed. This was right after the Lions switched play callers and had a slew of injuries. D’Andre Swift got hurt week 12 and was out until Week 17.

TJ Hockenson was out from week 14 through the end of the season. St. Brown had 69% of his fantasy production come between weeks 12 and 17. During this time St. Brown was getting at least 8 targets a game. Weeks 1-11 he had 5 games under 5 points and 9 games under 10 points. Those other two games, 10 points exactly.

Not only did the team trade up and use a high pick on Jameson Williams, they also added DJ Chark. They are getting back D’Andre Swift and TJ Hockenson who will demand targets. They also brought back Josh Reynolds and Quintez Cephus is returning from injury. This is setting up to have a lot of mouths to feed and it will be hard for St. Brown to repeat if he isn’t getting fed enough targets.

Jaylen Waddle was fantastic as a rookie. Waddle was more than just a deep threat, hauling in 104 out of 140 targets. Waddle also had 1,015 yards receiving with six touchdowns. His dynasty stock was soaring, but this off-season came with a lot of change.

Tyreek Hill was brought over to Miami and given a massive contract. They also will have a new offense under first-year Head Coach Mike McDaniel. I am not calling for Waddle to be a bust, but I don’t see him finishing as WR16 this year. Consensus rankings have him coming at WR20 currently.

DeVonta Smith had an underrated rookie season despite all of the BMI critics. Smith also got more competition for targets this off-season. The Eagles made a massive trade for A.J. Brown before giving him a monster extension this off-season.

Camp reports are that Brown is the focal point of this offense. This is an offense that ranked dead last in pass attempts in 2021 and 2nd to last in completions. The Eagles had the 5th lowest team passing yards and ranked 24th in passing touchdowns.

The offense should see an uptick in passing with upgrading from Jalen Reagor to A.J. Brown. The increases most likely go in the direction of Brown and not Smith.

Pat Freiermuth had a great rookie season in comparison to other rookie tight ends in recent drafts. He just happened to be drafted the same year as Kyle Pitts; he will likely stay in the shadow. Freiermuth was only 20 points behind Pitts in .5 PPR scoring formats behind seven touchdowns.

Catching seven touchdowns on only 60 catches and 79 targets is an efficiency metric that is likely to regress. The offense also is going through changes as they move on from long-time signal caller Ben Roethlisberger.

As I think Trubisky or Pickett will be an upgrade, we could see a quarterback change mid-season. This will affect all of the pass catchers and could cause some inconsistencies in passing trends throughout the season. I also prefer guys high on the pecking order for targets. This is a team that just resigned Diontae Johnson and drafted George Pickens.

They still have Chase Claypool and a great pass-catching running back in Najee Harris. Rookie Calvin Austin Jr. is having a good camp as well. Despite having the 3 rd best tight end schedule, I just think it will be hard to repeat the touchdown production.