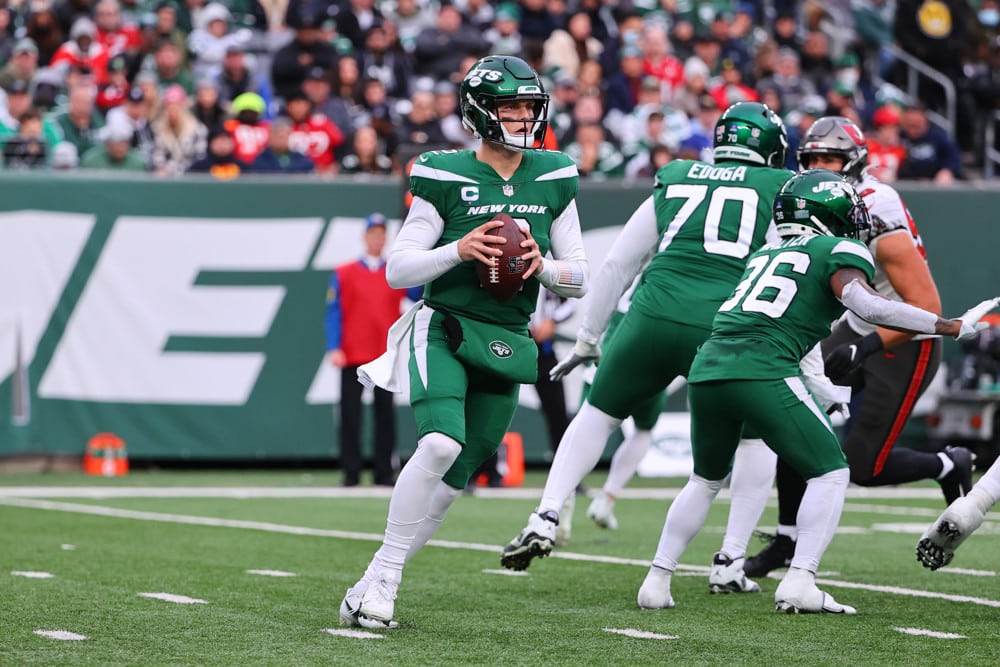 Not only do you get massive values from your Quarterbacks, but this allows you to construct a strong starting lineup before inserting that final piece. We already discussed the breakout candidates for 2022; let’s talk about some late-round Quarterbacks in your dynasty leagues that you can target while not having to pay a ton in draft capital.

Kirk Cousins is coming off of back-to-back 4,000-yard seasons with at least 33 touchdowns each. He is still being drafted 165th Overall as QB20. Cousins is also the same age as Matthew Stafford, and you can get him at a 4-round discount.

He is tied to Justin Jefferson, who is one of the best young Wide Receivers in the league. Cousins can easily be a top 12 QB, and you are only paying a top 20 price tag. He’s among the best late-round Quarterbacks and an ideal QB2 in Superflex.

I will not have Kirk Cousins Slander on my timeline today, I’m looking at you @4WhomJBellTolls

Zach Wilson has had an interesting offseason, to say the least. He has been winning on and off of the field, yet he is still coming in at 185 (QB19). Wilson is also about to turn 23 and was the #2 overall pick in the 2021 class.

However, Wilson struggled the first half of his rookie season and missed part of it due to an injury. Once returning from injury, he started to show progress, as did the offensive line as well. George Fant played admirably at Left Tackle and is rumored to be in line for an extension after allowing one sack in over 800 snaps.

Not only did they make additions to the offensive line, but they also added both Breece Hall and Garrett Wilson in the draft. Unlike Cousins, Wilson has youth and some rushing upside. I expect Wilson to have a breakout season. He is a perfect pairing with a veteran QB in your single QB startup drafts and an upside QB2 in Superflex formats.

Jameis Winston has been a better QB for fantasy than he has in reality. The Buccaneers moved on from him for Tom Brady, and then he sat behind Drew Brees for a year.  He got his shot, then tore his ACL.

It has been a while since he started, and there are concerns about his long-term value. Winston is currently being drafted 185th overall and QB23. Jameis Winston played in 7 games last year before tearing his ACL.

Winston threw 14 TDs and only three interceptions during this time, all of this without Michael Thomas. He now gets Michael Thomas back, has Jarvis Landry, and they drafted Chris Olave in the first round.

Winston threw five touchdowns and 0 interceptions in week one vs. the Packers last year, showing his potential. The Saints traded up twice in this year’s draft to ensure they filled holes at WR and Left Tackle, and this could be Winston’s team for the short term.

The #Saints played basically 11 games in 2021 with a combination of Taysom Hill, Trevor Siemian, and Ian Book at QB.

Aaron Rodgers just lost what most consider the best Wide Receiver in football, and they replaced him with a 2nd round pick from North Dakota State, who in his college career has 105 catches, 2,139 receiving yards, and 14 TDs. This, on top of his unknown future, has his dynasty stock plummeting. You can now get Aaron Rodgers in the 10th round at pick 121 (QB15).

Rodgers was drafted outside of the top 12 QBs for the first time in over a decade. He has made it work for years without elite talent and with changing pieces. Rodgers is 38, but he is still at the top of his game-winning back-to-back league MVPs.

I am comfortable taking Rodgers where he is at right now. Then grabbing someone like Zach Wilson or Davis Mills for some youth as a backup.

This will be the best offensive line he has ever had, and he gets to lean on the NFL’s top Running Back, Jonathan Taylor. Matt Ryan is the perfect bridge QB for your dynasty team as you wait for youth to develop.

Ryan Tannehill is currently being drafted as QB28 and is the 232nd player off of the board. Tannehill finished as a top 12 QB last season without his top wide receivers as well as Derrick Henry for the majority of the season.

Their big trade for Julio Jones last season was a bust, and their stud young Wide Receiver AJ Brown missed the majority of the season. They still somehow ended up as the #1 seed in the AFC, but the struggles Tannehill had in the playoffs have loomed over him this offseason. Now that he has lost AJ Brown, people are seemingly giving up on him.

I am not concerned about Malik Willis, and I like the additions the Titans made to this offense. They added Robert Woods, Treylon Burks, Austin Hooper, and Kyle Phillips. This has been one of the most efficient offenses under Vrabel and Tannehill, and I expect Tannehill to be pushing for another QB1 finish while you are only paying QB3 prices.