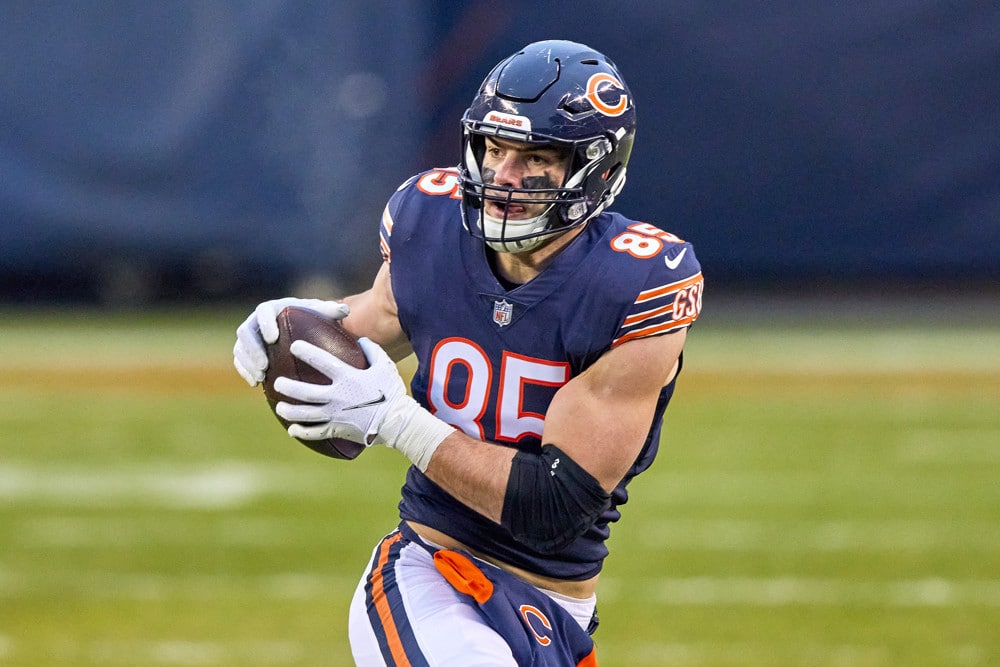 The Tight End (TE) position is one of the hardest to depend on in Fantasy Football. It is the same for your dynasty startups. You have to give up precious draft capital to pay up for these premiere guys or try your luck in the late rounds. This is much easier in single-quarterback leagues, where you are able to wait a bit on the quarterback.

So if you end up having to go grab a late round Tight End, I want to give you some options. This article details seven late-round options. These options are players being drafted outside of the top 12 tight ends and outside of the first ten rounds using consensus ADP.

Late Round Quarterbacks for Dynasty

Safest and Riskiest First Round Picks

Cole Kmet was previously mentioned as a breakout by guests on our podcast and by myself in my breakout article. Yet, he is still being drafted in round 11 as the 13th tight end off of the board. I spoke about being top two on your team in targets as being a golden ticket to being a top 12 TE.

Look no further than Cole Kmet. Kmet is coming into his 3rd year, and we have seen a steady progression with him. We need to continue to see an increase in yards per reception, and we need to see more touchdowns.

We don’t expect a ton of them in the Bear’s offense, but they will score some touchdowns, and Kmet should be one of the top options. This offense should only continue to improve as they move further away from Matt Nagy and try to build around Justin Fields.

Cole Kmet looking extra beefy while showing off his wheels and some nice hands.

I get it; it is the 3rd season in a row in which Irv Smith is on breakout articles, and we are still waiting (insert waiting GIF here). In round 12, he is worth the shot. We talked about this earlier on how hard it is to get a good tight end. We also talked about how you have to sacrifice other positions when paying up for a decent one.

The reward far outweighs your investment here, and I am still willing to take the shot. Kirk Cousins is coming off of back-to-back 33+ TD seasons, and he just got an offensive-minded head coach. Cousins has succeeded in similar offensive schemes previously when he was in Washington.

He has shown the ability to play well despite changes in the scheme as well as offensive coordinators almost yearly. Irv Smith has not succeeded due to injuries, not due to poor play. I am not giving up, and I think you should not either.

Evan Engram is a frustrating player as we saw a lot of promise early, and he just has not lived up to expectations since. Engram was the only healthy remaining option for the Giants in his rookie year, and he fell into 115 targets. Engram has only received more than 73 targets one other time in his career.

Partly due to missing time, but also partly due to his usage in this offense. Both times he had over 100 targets, he caught at least 63 catches. The difference was that his rookie year came with six touchdowns while the other was only one. All of that being said, if Evan Engram were to get 100 targets in this Jacksonville offense, he could be a top 12 tight end.

This team was very quick to go get Engram and prioritized him in free agency while their coach has prioritized tight ends in the past. That is a combination of the team lacking a true #1 WR option. There is a path where Engram could get those 100 targets this year and beyond.

David Njoku was thought to be out of town two years ago, and a lot has changed in Cleveland since then. Njoku got a massive payday, and starting TE Austin Hooper is out of town.

Baker Mayfield is traded, and Deshaun Watson is now their starting QB. Watson will miss the first six games of the season as of now, but Njoku and Watson should be tied together for the next four years.

Njoku will see the field a lot on a team that runs 12 personnel at one of the highest rates in the league. There is definitely a path where he is top two or three in targets. This could also be a very explosive offense once Deshaun Watson starts to play, and that could lead to a lot of scoring opportunities.

Noah Fant has seen a decline in his dynasty stock, and like all Seattle pass catchers, there aren’t high expectations for this year. Fant is now being drafted in the 13th round. This is a player with an absolute freakish athletic profile and extremely high draft capital.

Fant also happens to have been attached to one of the worst QB situations in the NFL the past few seasons. If Jerry Jeudy gets a pass, why can’t Fant? I get the frustrations with Fant, but at this price, you are able to stash him and wait for next season.

When Seattle has a Bryce Young or a CJ Stroud at QB, his stock will be much better than when you invested. So will DK Metcalf’s…..but that is a topic for another day.

I get the frustrations with Everett, and this is not the first time he has been on a pre-season late-round tight end list. The reason I put Everett on this list has everything to do with his situation. This is a team that has utilized the tight end in the passing game for 130 and 137 targets the past two seasons under Joe Lombardi.

Again, 100% of tight ends that received 100 targets in 2021 ended the season as a top 12 tight end. Their top TE options, Jared Cook and Hunter Henry averaged 88 targets combined in the last two seasons. Everett will also be attached to a high-scoring offense, and he is one of the cheapest starting pieces to get on that offense.

Isaiah Spiller too, but that is also for a different day. Everett’s cost mitigates the risk; at this point, he is your 3rd TE. You stash him and see where it goes.  You can drop him after the first few weeks with no worries at this current cost.

Trey McBride is still being drafted at the middle-end of the second round in your rookie drafts. McBride hauled in 90 receptions for 1,121 yards at 12.5 yards per reception his senior year. He only managed to score one TD during that time, but he did have 4 in each of the previous seasons.

McBride goes into a pass-heavy scheme that recently has been friendlier towards the tight end position. In 2018 and 2019 combined, the Arizona Cardinals targeted the TE position a total of eight times. Kingsbury quickly learned that you do need to use your tight ends in the NFL. In 2020 the Cardinals targeted the Tight End 68 times, and then in 2021, 108 times.

They also traded for Zach Ertz at the trade deadline as the team puts more value on the position.  McBride is a stash as Zach Ertz is only 31, but McBride is clearly better than the options going ahead of him in the drafts with way more upside.