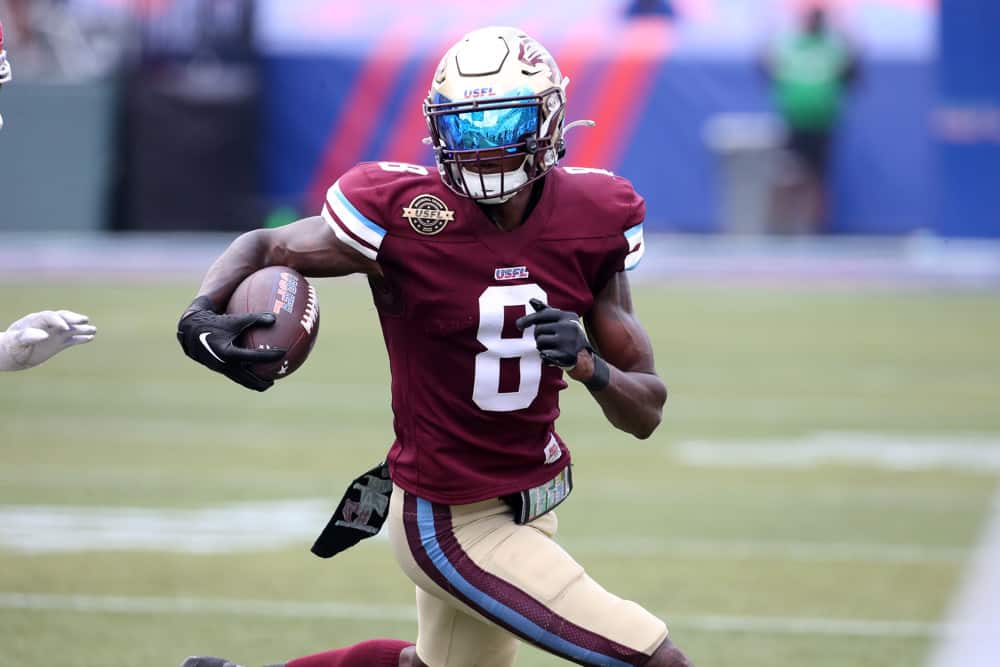 Now let’s get into why we are here. We are talking Week 10 fantasy USFL football. Let’s take a quick look at who I believe will be the best and worst performers in the USFL during Week 9 now that we have a little more information to go on. Who should you keep an eye on this week? Who can be safely dropped and whom should you be looking to target on the waiver wire? After reading this article you should feel confident in setting all your lineups for your USFL fantasy championship rosters and letting it ride this weekend while playing daily and season-long USFL fantasy.

You may not believe it, but Marlon Williams is the leading receiver for the Birmingham Stallions. Marlon Williams leads the team with 436 receiving yards surpassing Victor Bolden (405). Williams has been on fire the last two weeks. Bolden was also good in Week 9 totaling 8 receptions and 74 yards on 10 targets. Williams actually led the team with 12 targets and 7 receptions for 65 yards of his own. That makes two weeks in a row that Williams has received 12 targets and he is now proven he will be very involved with and without Bolden on the field. The Stallions have nothing to play for in Week 10 and may look to keep Bolden’s legs fresh for the playoffs. There is a chance Williams could have another 12 targets coming his way and makes for a very intriguing play in DFS given his low price point.

Get your votes in below to decide this week's winner! ⬇️ pic.twitter.com/P56kxqrLpx

Who should You Add Before Week 10?

At this point in the season, it is a little difficult to find an impact player on the waiver wire. There are only eight teams in this league and only so many impact players. I am going a little outside of the box here and making an argument for adding Shea Patterson in season-long fantasy if you are competing for the USFL fantasy championship. I also think he is worth considering for your DFS lineups if you are looking to stack other positions given the low price point of Patterson. The Breakers have nothing to play for in Week 10 as the playoffs are set. Sloter has been smacked around the second half of the season and the Breakers may look to give him a rest for some if not all of the Week 10 game. If you own Sloter in season-long fantasy, consider adding Patterson as insurance.

Michigan answers back with a score!@SheaPatterson_1 finds @SavageRoss_2 for the score late in the 3rd.

I was a big fan of Cary Angeline to start the season. He looked to be primed for a big season. He established an immediate rapport with J’Mar Smith and looked to be a primary target in their weekly game plan. Injuries have derailed Angeline’s season as he as has only appeared in five of nine games on the season. Angeline and Surratt have left a lot to be desired even with they are active only tallying 9 and 8 catches on the season, respectively. I know tight end is a bit of a thin position but if you are wasting a roster spot on Angeline hoping this is the week he is healthy, active, and productive; that is far too much risk for a USFL fantasy championship matchup. He is also not worth considering in DFS, even at his low price point. Drop him and don’t look back.

Who Could Breakout in Week 8?

The Generals have been looking for someone to step up and be the second option behind Kavontae Turpin all season. Early on it looked like it might be Randy Satterfield. Then, Alonzo Moore looked like he might have that role. Last week, Shepherd had his best game of the season when he paced the team in targets with 11 and tallied 8 catches for 99 yards and a touchdown. This is another case where the Generals have nothing to play for with the playoffs already locked up. I wonder if they reduce Turpin’s workload to rest him for the postseason and continue to give guys like Shepherd more opportunities. It may also be a “prove it” game to prove he should be the number two option behind Turpin in the playoffs. Shepherd price point makes him an intriguing option for all DFS lineups in Week 10.

The angle of this @DShep03 TD late in the 4th quarter 🙌 pic.twitter.com/HhwIbZ115E

Joe Walker is only one of three receivers to play in all nine games for Michigan. Skill position players on the Panthers may have been overlooked to this point in the season because their offense can look anemic at times. Lance Lenoir has been the go-to target for the Panthers all season leading them in targets, receptions, and yards. What you may not realize is that Joe Walker is tied for second on the team in target share percentage at 15.6%. In a close game against the Generals last week, Walker only had one less target than Lenoir but easily led the team in receiving with 7 receptions 129 yards, and 2 touchdowns. The Panthers have been throwing the ball more of late and may look to do the same in their Week 10 matchup against the lowly Maulers. Walker is a great DFS play at his price.

What to Look Out For Down the Stretch

Well, it is Week 10 of the USFL season and you know what that means. For most, this is the last week of season-long USFL fantasy. It has been a blast following this renewed exciting league. I for one, hope spring football is here to stay. The USFL gives professional football players a chance to showcase their skills and maybe earn another chance in the NFL. It has also been a fun quality product. Check back during the USFL playoffs as I am sure we will be discussing DFS plays all the way through the USFL fantasy championship!