Fantasy Baseball: A Trade Target For Every Position 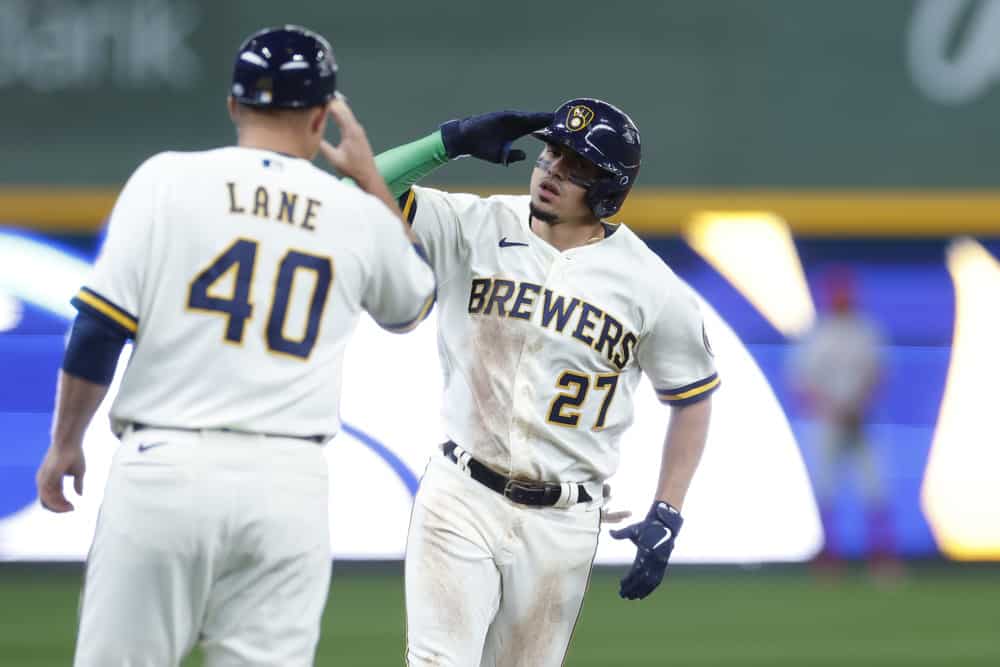 While it may be difficult to discern who will and won’t help you in the long run, there are indicators you can look for to help make your decision easier. I’ve spent a lot of time breaking down some smaller lists of guys who are worth a look going forward. This time we are going to break it down by position. And as always, we have an excellent trade value chart to help you with what trade target works best for you.

Since getting his first taste of major league pitching in 2020, only Tyler Stephenson has a better batting average than Kirk at the Catcher position. His .287 average and .365 OBP are second and fourth, respectfully. Kirk also has an excellent eye at the plate. In 2022 his 9.3% K rate is one of the lowest amongst qualified catchers. Much of that is thanks to his 88.2% contact rate and low chase rate at only 28.4%.

Alejandro Kirk wants that starting catcher spot in the All Star Game pic.twitter.com/2sVI0NeAzl

That eye for the ball has translated well to the type of contact he’s making as well. Kirk’s 8.1% barrel rate and 90.2 MPH average exit velocity are both well above league average. His 18 RBI at the moment may seem light, but he’s only had 31 ABs with men in scoring position so far this year. Kirk’s real value is in the high batting average and low K rate. He will be an excellent trade target in any format, but points leagues are where he shines.

Mancini can just flat-out hit the ball. I was trying to think of some cool way to start his breakdown but the more I look at his batting profile, that’s all I can think. Since bursting into the scene in 2019, the dude just rakes. 2022 is no different. Nine doubles and six home runs look pretty damn good on the surface, but that’s only part of the story.

Trey Mancini answers back and ties it up! pic.twitter.com/YrVKIDDGf4

After an unexpectedly slow start to the season, Marte is slowly rounding into form. This is what makes him an excellent potential trade target. Since May 1st, Marte is hitting .350 with 15 doubles, three home runs and 14 RBI while only striking out 15% of the time. He’s also stolen three bases which matches the amount he had the two previous seasons combined. I’d love to see him barrel the ball up a bit more (only 3.9% in that time frame) but his 91.1 MPH average exit velocity and 46% hard hit rate show he’s still finding ways to make quality contact.

While the time to truly buy low on Marte has passed, you may be able to still get lucky with that ugly April holding down his average and power numbers. On paper, the four home runs look frustrating to those in home run dependent leagues, but in leagues rewarding total bases, Marte has been a beast. His 21 doubles and four home runs have helped him to the eighth most total bases by second base eligible players this year. Get him before the upcoming power surge skyrockets his value.

I gave the heads up about Arraez back in April and my positon on him being a high value trade target hasn’t changed. He doesn’t offer much in the way of power, but what Arraez does bring to the table is one of the best contact rates in all of baseball at 92.6%. This contact rate combined with his career best 89.2 MPH average exit velo and sustainable 26.4 degree line drive rate have lead to Arraez becoming a monster in points and OBP leagues.

Is this man taking notes from Byron Buxton? That’s 2 HRs in the last 3 games#MNTwins
pic.twitter.com/hWgyoSH55i

His low extra base hit ceiling will certainly turn some fantasy owners away, but the average and on base ability Arraez has shown this season is second to none. Especially when you take his top-three strikeout rate into account as well. Striking out only 7.9% of the time has resulted in Arraez being the sixth best points league third baseman in baseball. Well, that and his .446 OBP. Flashy players are fun to watch, but people with Arraez’s skillset are what will bring you a fantasy championship in no time.

After a stint on the IL with an ankle injury, Adames should be right back in everyone’s sights as a trade target. The only real knock on his fantasy season so far has been his poor .199 batting average, but that can be explained. Adames has just been really damn unlucky. Despite having a launch angle not far off his 2021 season, Adames’s fly ball rate has shot to 45.8%, line drive rate dipped to 17.7% and his .209 BABIP is the lowest of his career.

Even with the unluckiness, Adames fits perfectly into the buy-low statcast standout category. His 16.7% barrel rate, 90 MPH average exit velocity and 45.8% hard hit rate are all career highs. Look for Adames to bounce back quickly and put up numbers equivalent to the year prior. Especially if he can relearn to hit the fastball. After hitting it for a .309 average in 2021, he’s hitting only .220 off of it this season. With top five positional upside, Adames is worth the price tag.

Garcia seems to be the textbook definition of a player who contributes in every category but is still underrated. I get it, he strikes out a lot, but his 28.1% rate this season is actually the lowest of his career. After a 2021 which saw Garcia breakout with 31 home runs and 16 stolen bases, he’s actually on track to hit those numbers again and then some. In fact, Garcia is one of only four players this season to have 10+ HR and 8+ SB.

Adolis Garcia makes this a one-run game with a three-run homer to left! The Rangers won’t go down without a fight. White Sox 5, Rangers 4. #ChangeTheGame #StraightUpTX #WhiteSox #Rangers #MLB pic.twitter.com/9vxzt8vGSe

His statcast numbers have a lot to do with his current success. His 11% barrel rate and 91.5% average exit velocity are both well above league average. Combine that with his career best sweet spot rate (39%) and hard hit rate (46.1%) as well as his 81st percentile speed rating and you have the makings of a fantasy baseball owners dream. Expect the occasional golden sombrero, but let the two home run, six RBI games he sprinkles in help you to forget about that.

Greene may be too readily available on the waiver wire to count as a true trade target, but he deserves a spot on this list anyways. After getting put through the gauntlet in his first few starts, Greene has actually put together an incredibly dominant season. Everyone knew about Greene’s fastball coming into this year, but it’s been his slider that has looked like the elite pitch this season. Hitters have been hitting an impressive .352 against the fastball, but his slider currently has a .112 batting average against and insane 40.4% whiff rate.

Hunter Greene was … wait for it … Red-hot with 8 K's over seven one-hit frames. pic.twitter.com/EX8wukUKAq

Overall his 32.7% whiff rate is in the 89th percentile according to statcast. His fastball will come into form soon. As a pitch that averages 98.5 MPH and has a 98% active spin rate, it has lots of life and will find its mark sooner rather than later. The run support may not always be there for Greene, but giving up two or fewer hits in three of his last six starts is a sign that things are really starting to click for him. In leagues dependent on strikeouts, there may not be too many better options than Greene.