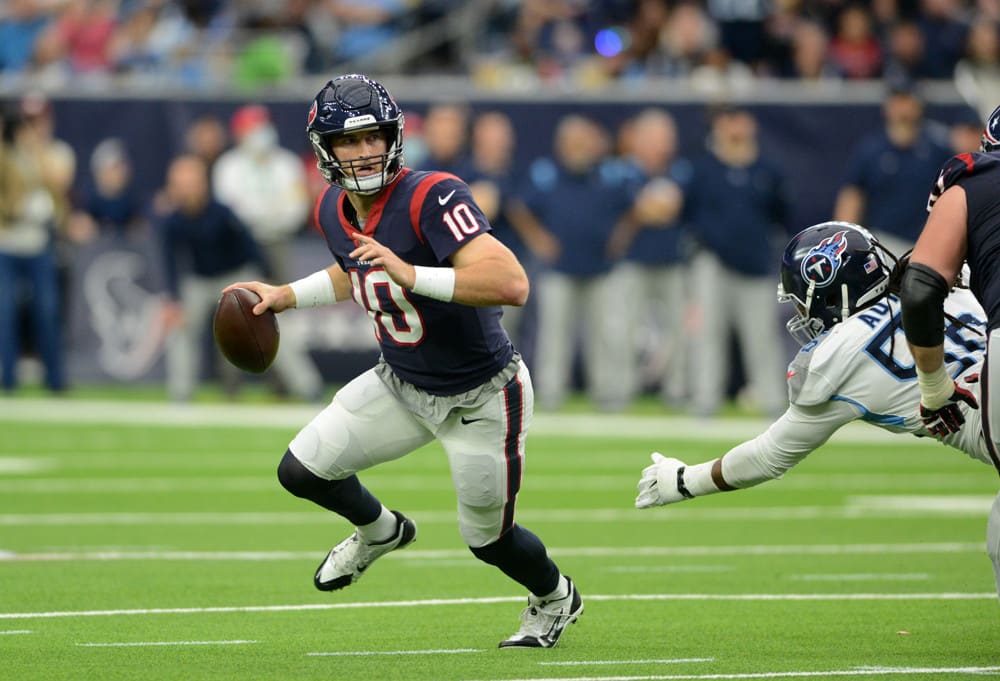 It’s that time of year again that we start to enter some dynasty startups, or begin to prepare for redraft season. One thing we always need to do is try and find that diamond in the rough. The one player who emerges out of no where to become fantasy relevant, these sleepers are hard to pin down though. Let us help you with that this season. Below we have put together a list of some players who have a high probability of becoming a 2022 dynasty fantasy football sleeper.

If you are in a SuperFlex league Davis Mills has to be on your radar. As many managers still don’t value him highly, letting him slide under the radar. However, if we look back to last season we can see that he showed us some very nice things, on what was a very untalented team. From weeks 13-18, he was the QB11 and produced multiple 300 yard passing games. Over the span of his 13 starts he also had 16 big time throws, but also had 20 turn over worthy throws. Like any rookie quarterback back there were ups and downs, but he showed enough to keep the starting job for one more year.

Who Else Is Excited For Year 2 Of Davis Mills ? #wearetexans #Texans https://t.co/WtLj2ShZOJ

Although he may not be the long term option he is set to be the starter in 2022. With another year of development and a improving roster we could see Davis Mills emerge as a 2022 dynasty fantasy football sleeper. Helping any manager willing to take the risk win championships!

After yet another coaching change for Daniel Jones, what can we expect? Luckily for him they brought in Brian Daboll this time. We saw him work wonders developing Josh Allen in Buffalo, giving us a small glimmer of hope for Daniel Jones. Last season outside of the injury, we saw him have a pretty solid season. Setting a career high in completion percentage at 64.3%, with little help from his wide receivers. In large part due to them being unable to staying healthy. Even when healthy they struggled, of 361 attempts 19 of them where dropped. Aside from these struggles he was on pace to set a career high in passing yards.

Looking forward to 2022 there can be a case made for him to become a fantasy football sleeper. Many people are down on him, making him extremely affordable currently. With an improved game plan that works towards his strengths and an improved roster we could see an improvement. Add in a fully healthy Saqoun Barkley and a return to the QB1 ranks is with in reach for Jones.

Many people may disagree here, but hear me out. Ronald Jones has proven that he is a quality running back in this league, producing over 2,100 yards at 4.5 per carry. This included a 978 yard season just two years ago. Struggling with ball security has really been his only down fall(7 over 4 years). Now looking at the Chiefs roster, we have a team who has struggled to find an answer at running back. First round pick- and potential bust Clyde Edwards-Helaire is a player who has not lived up to the hype. However, a pairing of Edwards-Helaire and Jones is the best for both parties.

Since it's Ronald Jones day, let's look at the advanced stats. I also noted this in my free agent RB article @RotoViz

The question remains – will Jones garner the opportunities in KC pic.twitter.com/kwlvQfxWyv

In 2022 we can expect the Chiefs to use Ronald Jones on the early downs and in clear running situations. While using Edwards-Helaire in the passing game where he really excels. This will allow Ronald Jones to see opportunities in the redzone which will lead to fantasy points, similar to Darrel Williams last season. Finishing as a RB2 is definitely in reach for Ronald Jones if he carves out this role for the Chiefs.

Entering the league out of BYU this year, Tyler Allgeier is walking into a perfect situation to excel early and often. At BYU this past season he posted 1,601 yards and 23 touchdowns(leading the 2022 class), while averaging 5.8 a carry. Now joining a Falcons team that cut veteran Mike Davis right after the draft, leaving only Damien Williams(30) and Cordarrelle Patterson(32) to compete with for the lead role.

Tyler Allgeier led the FBS with 1,847 rushing yards after contact since 2020 🔷pic.twitter.com/m4BGYQWSa1

Although he had an impressive season, we saw Patterson’s role decrease down the stretch. Also, we are hearing rumors that the Falcons want to use Patterson out wide more this season, this will open the door for more opportunities for Allgeier. As it stands today, it looks like Allgeier has a clear path to top 24 upside in what will be a run heavy offense.

Coming off an ankle injury, DJ Chark hit free agency landing in Detroit, this caused a dip in value. However, this dip is unnecessary as the Lions are starting to build a solid offense and he’s a key part of it. Last season Chark produced 154 yards on 7 receptions and scored twice, all in the four games prior to his injury. His two touchdowns held up as the second highest total from a wide receiver on the team. Over his career DJ Chark has put up impressive numbers in the following: 545 yards after the catch, 13.9 yards per reception, and a 39.1% contested catch rate. On top of this in 2019 he eclipsed 1,000 yards receiving and scored 8 times, finishing as the WR17 in PPR scoring. Proven that he can produce at a high level when paired with solid quarterback play.

New Lions WR DJ Chark is a bonafide deep threat and red-zone asset. Here are some of my favorite plays from him over the years. pic.twitter.com/JtCEwY6Hlr

With a much improved offense this year the Lions are poised to improve greatly. As the top option on the perimeter DJ Chark will see a large target share. With teams keying in on Tj Hockenson, Amon-Ra St. Brown, D’Andre Swift, and Jameson Williams when he returns, will leave Chark to face easier coverage. Also, don’t worry about Jared Goff, we have seen him sustain two top 30 wide receivers in the past. This is what makes DJ Chark a prime candidate to become a 2022 fantasy football sleeper, and help you win your championship.

Fresh off of back to back 700 yard season on a terrible Falcons team, Gage has moved down South to join the Buccaneers. For some reason no one is talking about this move enough. Over his career Gage has taken over 60% of his snaps from the slot, an area of need for the Buccaneers. He has also shown an ability to create after the catch having back to back season of 250 plus yards after the catch. This will be on full display this year, due to Tom Brady’s ability to hit receivers in stride. Another strong area of his game is at the catch point, as he had a 57.9% success rate in contest situations.

From Weeks 11-18, here is where Russell Gage ranked among all WRs 👇

Massive upgrade at QB and the WR2 (to start) on the most pass-heavy team from 2021.

Looking forward to 2022, we see a Buccaneers team desperate for a second wide receiver to start the season. Mike Evans is locked into the lead role, but then it’s wide open until Chris Godwin returns. Which seems more likely to be later than sooner, as reports are he’s behind on rehab. This will create plenty of opportunity on a team who throw the ball well over 700 times last season. Russell Gage has proven he can take these opportunities and produce, finishing as a WR2 is likely this season making him the perfect 2022 dynasty fantasy football sleeper.

This former first rounder has been on a steady decline ever since his breakout rookie season, where he posted 700 plus yards while scoring 6 times. Between injuries and drop issues, Engram feel out of favor in New York. This season he has taking his talents down south to the great state of Florida. Getting the opportunity to play with second year star in the making Trevor Lawrence. Last season Engram posted career lows in yards(408) and yards per reception(8.9). However, he played 68% of the snaps from the slot and had a 50% contest catch win rate, both career highs. Last season we saw Dan Arnold come in and play a big slot role, he posted impressive weekly numbers. Prior to his injury, he had a span of five weeks where he posted four double digit fantasy point weeks. This is the role we should expected Engram to play, think Mike Gesicki.

With improvement at the skill positions for the Jaguars, more space will be opened up in the middle of the field. Engram will take advantage of this and turn it into early success. Once the trust is built between him and Trevor Lawrence, he will become a security blanket. On top of this Engrams speed will allow him to press the seam, something the Jaguars have been missing. With the two added field stretchers on the perimeter, Christian Kirk and Zay Jones the Jaguars will be able to exploit the defenses with this route. With all of these factors added in, Evan Engram is primed to propel himself into the TE1 ranks once again, prices as a TE2 making him a great 2022 dynasty fantasy football sleeper candidate.