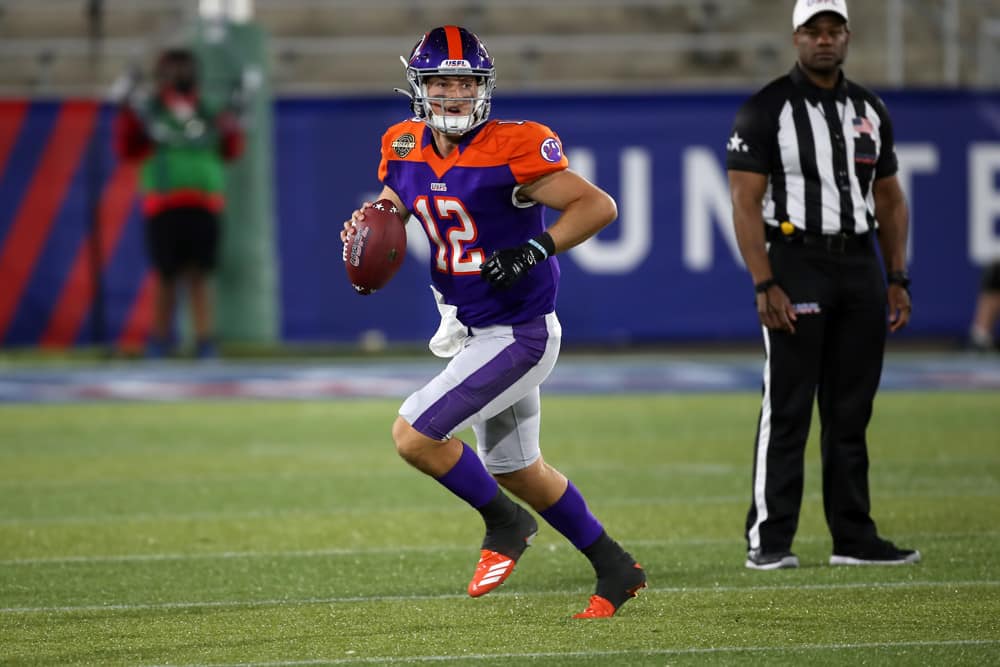 The USFL has made it to Week 5.  The halfway point of the season continues to bring us excellent catches, close games, and hard hits.  And the more hard hits we get, the more the injuries can pile up.  And in a smaller league with smaller rosters, injuries mean roster moves, releases, and additions for replacement.  Continue to check back for updates as Matt Morse and myself continue to break down the USFL Week 5 Inactives report and the latest USFL roster moves.

While the Tampa Bay Bandits and Pittsburgh Maulers haven’t released an injured report yet, there was one big roster move made by the Michigan Panthers.  As he was released, Josh Love was claimed off waivers by the Michigan Panthers.  Love, who completed 40 passes out of 74 attempts for 440 yards, two touchdowns, and two interceptions.  Love’s release is interesting as he looked to be doing well.  In fact, the Panthers’ current quarterbacks Shea Patterson and Paxton Lynch have combined for only 456 yards, two touchdowns, and four interceptions.  It stands to reason that the Panthers may release either Patterson or Lynch, especially with Lynch nursing an ankle injury.  After learning the offense, Love could make an immediate impact.  This is one of the biggest USFL roster moves we’ve seen yet.  The Bandits signed linebacker Anthony Butler and released DE, Mekhi Brown in a corresponding move.

The Tampa Bay Bandits don’t have any surprising names on their inactives report.  The Pittsburgh Maulers made the most moves this week, releasing four players and signing four.  While we expected quarterback Paxton Lynch to still be injured, it was confirmed that he will remain on the USFL Week 5 inactives report.

As the week is early, the New Orleans Breakers haven’t released any roster moves or any USFL Week 5 Inactives.  However, the New Jersey Generals did have to make a move at kicker given an injury to Nick Rose.  Rose hasn’t been cut, but he was added to the inactives list.  Rose has a current total of 14.70 fantasy points.  In his place, the Generals have added former Alabama kicker Austin Jones.  Jones had three years in a row from 2015 to 2017 of over 80% on field goals and he’ll look to get his kicking career back on track with the Generals.

While there aren’t huge impacts on the New Orleans Breakers inactives report, Larry Rose is one name that sticks out.  While Rose hasn’t had huge production, he has split the workload with Jordan Ellis ever since T.J. Logan was injured and cut.  Look for Ellis to get even more work, even though he’s already averaging 63% of the backfield carries.  The New Jersey Generals are missing a couple of pieces, but nothing that should affect their offense or defense too much.  J’Mon Moore was expected to have a good target share coming into the season, however, he hasn’t been super effective up to this point.

In the early part of Week 5, we have some roster shuffling. The Stars signed defensive tackle Antwan Owens and released defensive end, Carroll Phillips. The Stars seem to be looking to beef up their interior defensive line and feel good about their current crop of edge rushers. Owens played his college ball at Jackson State. The Stars are also looking to improve their kicking game as they released K Matt Mengel and signed K/P Luis Aguilar.

The Stallions have relied heavily on CJ Marable and Tony Brooks-James in their running game and appear to be planning on continuing that plan. The Stallions released Jordan Chunn leaving Marable and Brooks-James as the only backs on the roster. Birmingham release OT Justice Powers and signed OT Tyree St. Louis as his replacement. The Stallions have signed Bo Scarbrough to be their third running back. He has some NFL experience and could be a valuable backup. He is not currently fantasy relevant.

The USFL Week 5 Inactives for Stars vs. Stallions

QB Montell Cozart and TE Sage Surratt are inactive for the Stallions. This means J’Mar Smith and Alex McGough are healthy enough to be the two active QBs on the roster. This is also good news for Cary Angeline who is likely now the only active tight end and a top receiving target for the Stallions. This will be another week without Bryan Scott for the Stars. Look for Case Cookus to get the start and lead the offense. Wide receivers Brennan Eagles and Kahlil Lewis also find themselves on the Week 5 USFL Inactives report.

In what might be a surprising move to many, the Maulers waived former starting quarterback Josh Love and signed QB Vad Lee out of James Madison in a corresponding move. The Michigan Panthers proceeded to claim QB Josh Love. The Maulers also released CB Prince Robinson and WR Kenneth Walker III. The Maulers will be without wideout Jeff Thomas this Week. Bailey Gaither is active. Look for Gaither and Tre Walker to see the majority of targets. Brandon Williams will be inactive for the Gamblers in Week 5. The Gamblers will be without two of their top playmakers in Tyler Simmons and JoJo Ward. Look for a lot of targets to go Isaiah Zuber and Anthony Ratliff-Williams’ way.