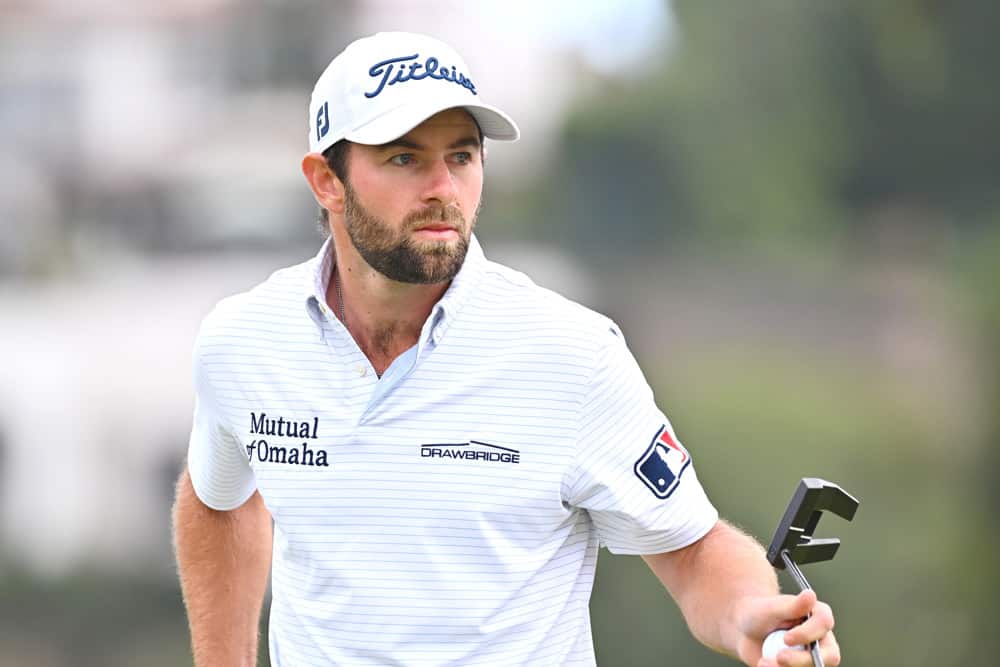 Welcome back degens! Time to make some picks for the 2022 Wells Fargo Championship.

We are back on American soil this week at TPC Potomac for the 2022 Wells Fargo Championship. This course is completely the opposite of what we just saw down in Mexico. Go check out Steve’s course breakdown to see what type of golfers we should be targeting this week.

It’s another week with a course where there isn’t too much data. That makes it prime gut handicapping time. This is a much shorter card than I typically create. For my full card, listen to the 2022 Wells Fargo Championship Picks and Prediction episode of the Golf Gambling Podcast. With that said, let’s get to it! Here are my top picks for the 2022 Wells Fargo Championship.

Chalk Conners week. What could possibly go wrong? I know the number is gross, but just like last week we have to leave that mindset behind. Corey Conners was born for TPC Potomac. He’s is great off the box and a monster from tee-to-green.

The small greens should help him avoid the worst part of his game, which is obviously the flat stick. And with how great of a ball-striker he is, his ability to hit more greens than the field is a huge edge. Don’t overthink this one. Pick Corey Conners at the top of your 2022 Wells Fargo Championship betting card.

Si Woo Kim is one of my binkies. I can’t talk about him without being completely biased. But he has become much more consistent than prior years. Si Woo Kim has made 12 of his last 13 cuts. He’s shown significant improvement with his irons and accuracy off the tee. And in two of his last three ShotLink measured tournaments, Si Woo has gained over 5 strokes on the field.

Si Woo historically struggles on Bentgrass greens. But at the Masters, he gained over a stroke per round on the field on them. If he can putt at Augusta National, he can putt on any Bentgrass surface. And given his good course history at the comp courses, I love Si Woo this week. Pick him to win the 2022 Wells Fargo Championship.

Cameron Young is clearly the front runner for the PGA Tour Rookie of the Year. It’s for good reason. Cameron Young is the #1 player off-the-tee and tee-to-green over his last 24 rounds. The narrative that he is just a bomber is incorrect. The kid is good with his short to mid irons and he can putt. Plus, he grew up in the Northeast. He should be more than comfortable playing off similar turf conditions at TPC Potomac.

At the RBC Heritage, he got off to a fast start and grabbed the first round lead. While he faltered a little on Saturday, he righted the ship on Sunday to finish T3. I’m picking Cameron Young to get his first win at the 2022 Wells Fargo Championship. You should too.

I love Gary on courses where he can club down. And he has been trending in the right direction over the last few months. In Mexico, he gained almost 10 stokes on the field tee-to-green. But he couldn’t buy a putt. Last week was his worst putting week since February 2021. That screams for positive regression. Give me 3/1 that he doesn’t putt that bad again this week and continues to hit the ball great.

This feels like a Matt Kuchar course, right? Kuchar has two Top 5’s and a Top 20 in his last 3 events. His putter has been on fire his last few tournaments. Over his last 12 rounds, Kuchar is gaining almost 1.3 strokes per round on the field on the greens. I love Kuchar on short golf courses, especially when he’s in great form. Pick him at 2/1 for another Top 20 at the 2022 Wells Fargo Championship.

This prop is essentially a head to head between Sepp Straka and Matthias Schwab.

These props always seem like sucker bets. But this one looks like free money. Is there a player who has been more disrespected based on his current form and results? He has a win, two more Top 10’s and a 30th place finish in his Masters debut over his last four starts. That’s a pretty damn good resume.

He’s matched up against Matthias Schwab, who is horrific on Bentgrass greens. While he does have several Top 10’s this season, all of them came in spite of his performance off-the-tee. I love this play. I’m picking the Big Bulldog as low Austrian at the 2022 Wells Fargo Championship.