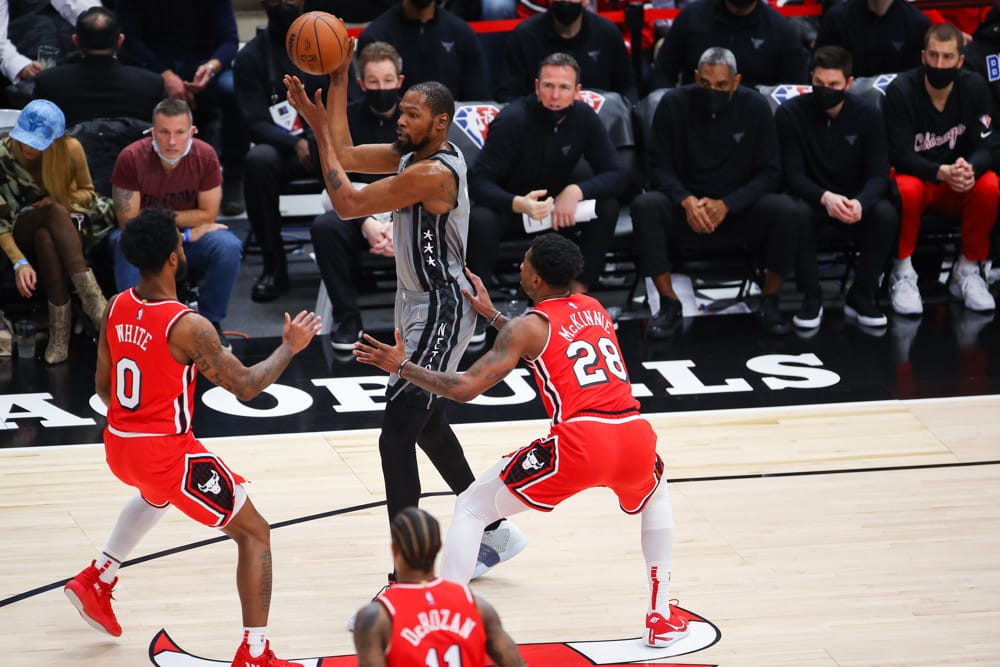 The first round of the NBA playoffs is in full swing and we’re here to help you out with your NBA DFS lineups. There are plenty of different single game, full day, as well as slates in between. This week, we’re tackling the Saturday night action with a two-game lineup. This lineup will contain action from Game 3 of the Celtics and Nets, and also Game 4 of the Grizzlies and Timberwolves matchup. Let’s get in that green.

Beverly has actually been pretty cold on the shooting side of things so far in the playoffs. From three-point, he’s just 2-for-12 in the series. However, the way he’s been filling out the stat sheet, it has hardly mattered. He’s gone for 30+ fantasy points in two of three games. Imagine how far he’ll smoke the NBA DFS projections if he just shoots a little better.

Ain’t no way Patrick Beverly just did this in a playoff game lmaoo pic.twitter.com/45O37u1gOp

His teammate may have won Defensive Player of the Year, but Brown has really turned in some stellar defensive games in these playoffs. His defense has been so good, that he’s become a must-play NBA DFS asset for me. Seven steals and two blocks in the series already have him at 40+ fantasy points in every game thus far.

Sure, the talk over the last few days is all about how the Celtics are shutting Kevin Durant down. His NBA DFS scores in this series have been nothing to write home about. However, with Durant returning home and with all the narrative aimed against him, I expect a big turnaround here.

His stellar play has Al Horford‘s NBA DFS salary going up, but it’s not keeping up with his production. He’s averaging a double-double in the series and still is costing less than 7k. That’s the kind of down lineup play that you need to crack the top.

He may not be the one making headlines, but the series Brandon Clarke is putting in should have him circled for your NBA DFS lineups. He’s averaging over 30 fantasy points a game on the heels of scoring and rebounding that are both exceeding his regular season average.

Desmond Bane was a big part of the Grizzlies comeback in Game 3. He drilled seven three-pointers en route to the comeback win for Memphis. Will that performance help him maintain some of the 40 minutes of floor time that he played? I’m imagine so and I’d imagine that’d help out your NBA DFS chances.

That’s a stat line for a guy costing you under 4k in NBA DFS this week. Sure, he’s probably not going to put up those gaudy numbers again, but a fraction of that would make him worth the cost.

Goran Dragic is averaging double his regular season points average in these playoffs. A lot of that is due to the Celtics lockdown on guys like Durant or Kyrie Irving. No matter the reason, he’s still a cheap NBA DFS asset and is going for nearly 25 fantasy points a game.

Make sure to check out all the great NBA coverage we have to offer and be sure to listen to the NBA Gambling Podcast, which airs twice a week. This week the guys are breaking down all the best plays for the coming days and plenty of information that could help you with your NBA DFS rosters.