USFL Fantasy Football: How To Set Up Your League Using AltFantasy Sports

USFL Fantasy Football: How To Set Up Your League

USFL Fantasy Football: How To Set Up Your League

Where Do I Play USFL Fantasy Football?

This is the easiest question to answer.  Alt Fantasy Sports has everything you need to start a USFL fantasy football league.  Or you can always find somebody already running one and join their league.  And good news, set up couldn’t be any easier.  But first, let’s start with the basics.  You’ll have to register yourself here first if you haven’t already.  All you need to do to register is provide your e-mail and create a password. 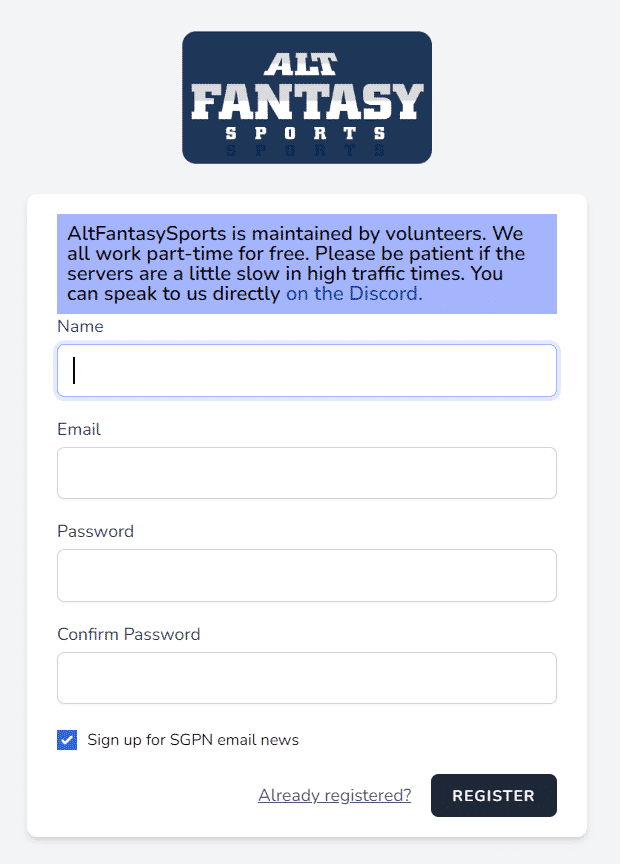 Now that you’re registered it’s time to create your USFL fantasy football league!  Again, this couldn’t get any easier as all you have to do is click the button on the dashboard page that says “Create USFL League”.  Once you click that button, it’s time to decide your league’s settings. 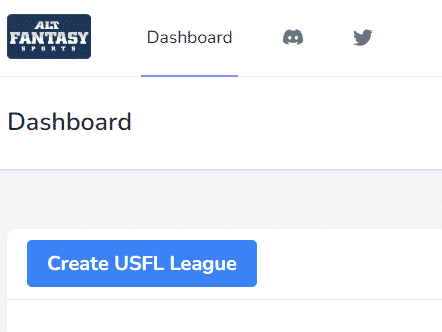 The first part of creating your USFL league is easy to determine.  First, enter your league name.  Second, determine what type of league you want to run out of three options.  The first option is head-to-head, where everybody will go head-to-head like a real football league and your record will be based on wins and losses throughout each week.  The second option is total points, where the person with the most total points, out of the line-ups they set each week, wins.  The third option is a best ball league.  In best ball, you draft your entire team, and the best lineup will be automatically set at the end of each week, maximizing your points.  The manager with the most points at the end of the league wins.  The last thing to decide in this section is how many teams you will have and naming your team.  With only eight teams this year, it is likely you won’t want to exceed eight managers in your league.  Also, don’t forget to make your name fun!

Now, it’s time to determine your league’s roster settings.  The most common setup will be one quarterback, two running backs, two wide receivers, one tight end, and one flex.  You can also choose to have one kicker and one defense or not include them.  The default bench spots are set at four.  But, with a league that may change quickly, you can always raise the number.  At four, the waiver wire used to pick free agents will be more active.  However, six spots could give your teams some more stability. 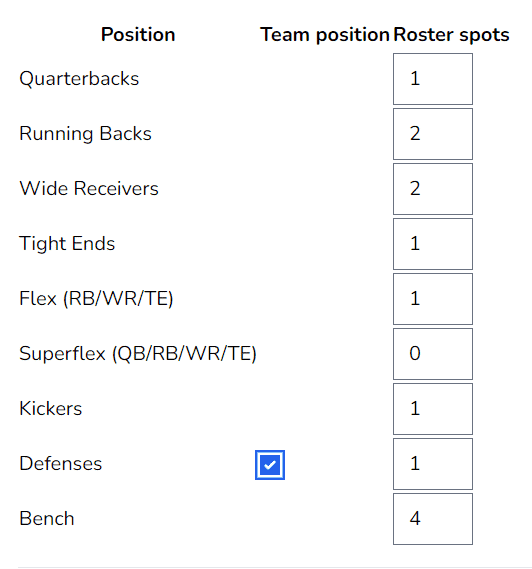 If you ended up only having four managers in your USFL fantasy football league, it would be fun to add a Superflex option to your league.  A Superflex can be a quarterback, running back, wide receiver, or tight end.  If you have only four league members this would allow you to potentially play two starting quarterbacks, since there are eight starting quarterbacks in the USFL.  Perhaps you want to pair the dual-threat running ability of Jordan Ta’amu with the pocket passing of Clayton Thorson to have the best of both worlds.

The last thing to determine when setting up your USFL fantasy football league is the scoring settings.  There are so many different ways you can set up your league that will affect the outcome of each week.  The default settings follow pretty closely to most fantasy football leagues.  You get six points per rushing, receiving, or special team touchdown and four points per passing touchdown.  A half a point per reception.  One point per 10 rushing yards and one point per 10 receiving yards.  Passers get one point per 25 yards.  Also, you will lose points if your player fumbles or throws an interception. 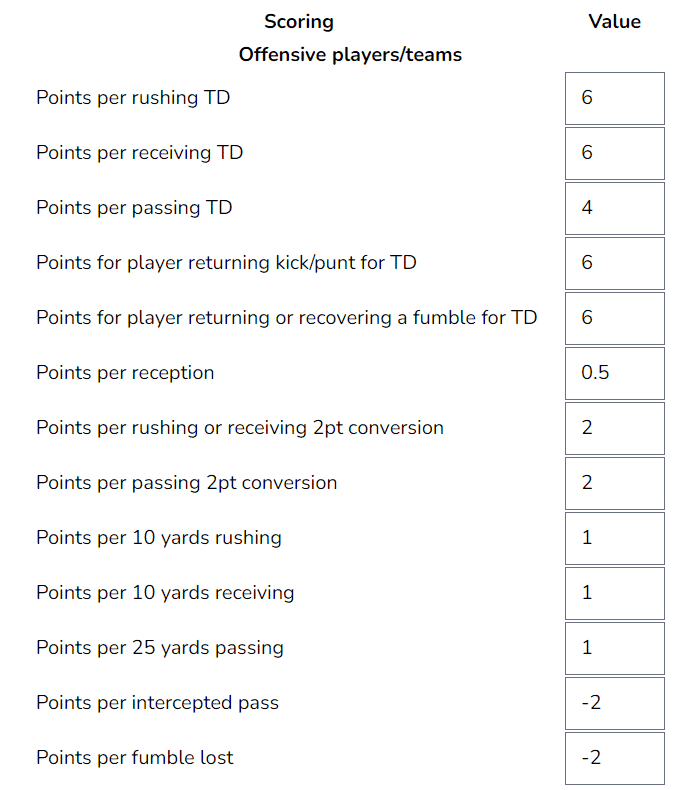 The defense and kickers get points as well.  Kickers score points based on the distance of field goals made.  And kickers will also lose points for missed field goals.  But don’t sleep on the defense, as they can rack up points as well.  The default setting has the defense starting at 10 points.  However, they’ll gain points for interceptions, fumble recoveries, blocked punt or field goals, safeties, and sacks.  Furthermore, they’ll lose points for allowing the opposing offense to score points.  Now let’s go over some options for setting up your league. 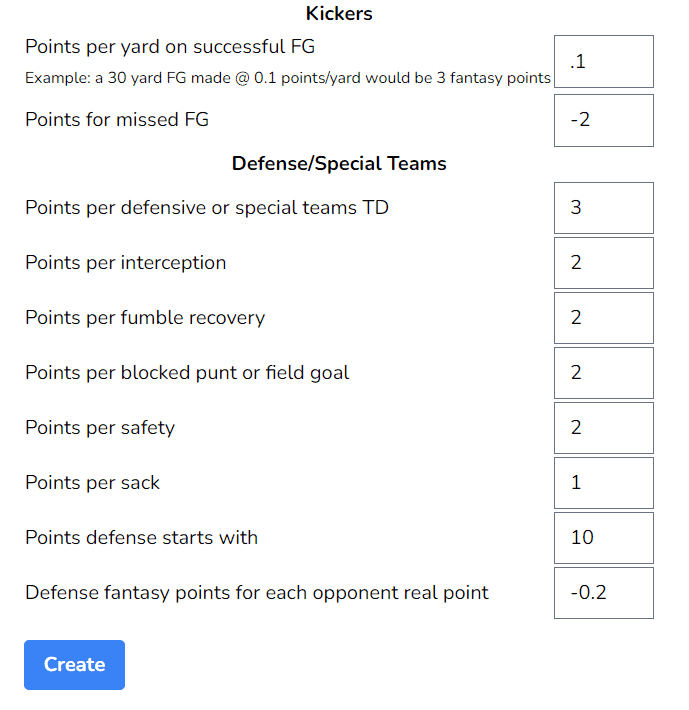 While the default setting for defenses is very standard, maybe you want to add a little more excitement by inflating their numbers a little.  After all, this is USFL fantasy football and you should strive to make it extra fun since it is likely your first year!  One way of doing this would be to put defensive touchdowns at six points each instead of the defaulted three.  I have also participated in a fantasy football league that gave three points each per interception and fumble recovery.  While this is only moving it up one point from the defaulted setting, it can start to change managers’ strategies on when they want to start drafting a defense.

Something to decide right away for your USFL Fantasy Football league is how many fantasy football manager’s you’ll have in the league.  While Alt Fantasy Sports allows you to have one to 16 teams, it’s important to remember there are only eight USFL teams.  I would recommend eight being the max.  Any more than eight and the extra teams won’t be able to draft a starting quarterback.  Anywhere from four to eight seems reasonable.  Even though eight would be the most competitive due to most managers not wanting to have to take the last quarterback, four teams would also be fun, especially if you add a Superflex.

Your USFL fantasy football roster construction may be determined more by how many league managers you have.  If you have four, as stated earlier, it would be fun to throw in a Superflex position so that each team would ideally target two quarterbacks.  Some leagues may set up the requirement of only one running back, one wide receiver, one tight end, and three flex spots.  You could also decide to have a very limited bench, making the waiver wire more active, or you could extend your bench.  Extending your bench spots could also change your draft strategy, depending on how you weigh key positions.  For example, you may decide running back is more important and try to draft one for your bench before you fill your wide receiver or tight end positions.

Regardless of how you determine to set up your roster construction, scoring, and league size, one thing is certain.  USFL fantasy football is right around the corner and Alt Fantasy Sports has you covered for creating your league.  Their platform is easy to use and they are leaders in NFL-alternative football.  So go out and find your fantasy football friends and create a league today.  Even if you don’t know exactly who all the players are the Sports Gambling Podcast has plenty of articles to help you get to know each team and their players.  Also, don’t forget to tune in to the Fantasy Football Podcast as we draft our own league on Thursday evening.  This draft will be a follow-up to our mock draft episode.  And as always, good luck as you start your leagues and be thankful that Alt Fantasy Sports is making sure we can get our fantasy football fix!