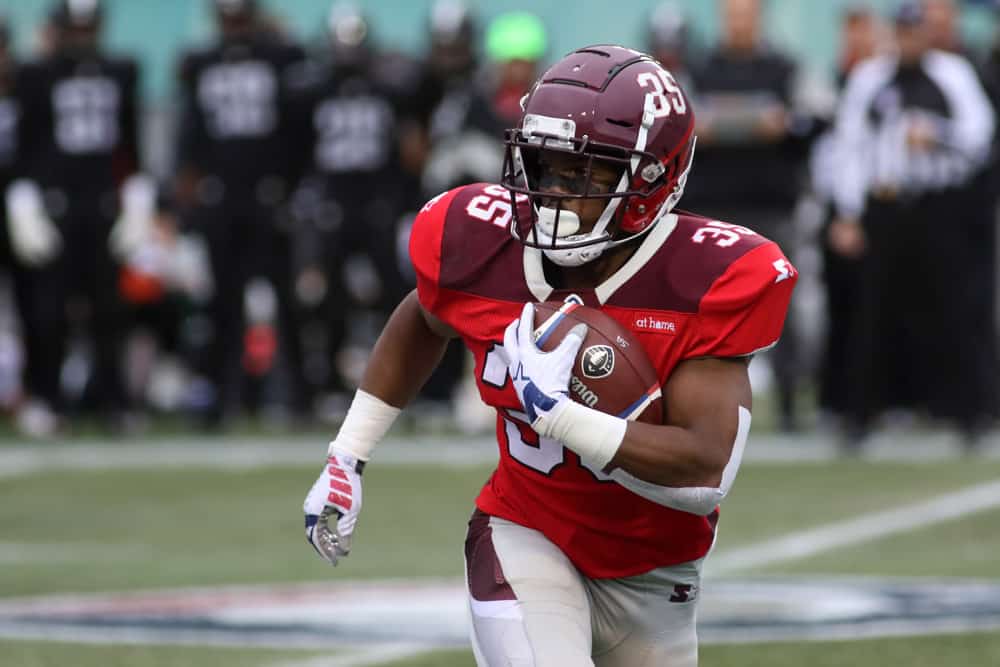 The kickoff of the 2022 USFL season is now exactly a month away. With the supplemental draft complete, rosters are beginning to take shape. Now, it’s time to take a look at the USFL Running Backs Rankings for your fantasy football drafts. Many of these ball carriers have seen professional action before in various leagues. For others, this will be their first taste of football after college. Either way, there are several to keep an eye on as we move into the season. Here are the top 10 running backs and their path to the United States Football League.

Quarterback Rankings: A Breakdown of the USFL Quarterbacks

Anyone familiar with Spring football is aware of De’Veon Smith and his talent. He was a member of the unofficial Alliance of American Football champion Orlando Appolos team. Smith split touches with D’Ernest Johnson in that backfield. While Johnson got the headlines, Smith ended his time in the AAF only 27 yards behind his Cleveland Browns counterpart. He also had six rushing touchdowns which were four more than Johnson.

Smith would eventually find himself as a key member of the Tampa Bay Viper’s offense in the XFL. He was poised to have a breakout season, leading the league in rushing after five weeks, until the league folded. Smith has the added appeal of playing for Kirby Wilson who has spent almost his entire career as a running backs coach. The sky is the limit for the champ and he should do big things for the Pittsburgh Maulers.

When you look at what Paul Terry did in his college career at Eastern New Mexico University, you may wonder why he is not playing on Sundays. In his senior year, Terry carried the ball 350 times for 1,888 yards. He did this in only 12 games. He also had 17 rushing touchdowns. Over his entire time with the Greyhounds, Terry gained 3,525 yards on 644 carries with 32 touchdowns. He has clearly proven he can handle a major workload.

Terry most recently spent some time with the Generals of The Spring League. In his six-game season, he had 39 carries for 240 yards and three touchdowns. He will get to work with former Generals’ quarterback and Spring League champions Bryan Scott in Philadelphia. While the two did not play together, there is bound to be a level of comfortability that bodes well for Terry’s fantasy value.

The path to a full-time professional career for Trey Williams has been a long one. It started in 2015 as an undrafted free agent in Washington where he failed to crack the starting roster. He then made stops in Dallas, New England, Miami, Indianapolis, Pittsburgh, Toronto, Dallas again, San Antonio, Seattle (XFL), Calgary, and Toronto again. His NFL credits total two carries for 12 yards as a Colt. His most significant work came in his stint with AAF where he amassed 205 yards and a touchdown on 40 carries. As a Dragon in the XFL, he managed 122 yards and a touchdown on 34 touches.

Trey Williams takes it in for 6.

The Iron turnover proves costly, and the @aafcommanders have a 9-3 lead. pic.twitter.com/eFInrexL0k

All of this was built on his college career at Texas A&M. Over his three seasons as an Aggie, Williams racked up over 1,300 rushing yards, 330 receiving yards, and almost 1,700 kick return yards. Williams also tallied 19 total touchdowns in that time. He walked away from College Station after his junior year to declare for the 2015 NFL Draft. He’s going to have some competition in the way of Darius Victor. That said, he should earn a large portion of the work in the New Jersey General’s backfield. He very well could end the season number one in the USFL Running Backs Rankings.

Selected in the supplemental draft, Devwah Whaley will pack a punch to the Houston Gambler’s offense. The former Arkansas Razorback was last seen as a member of the Dresden Monarchs of the German Football League. Whaley helped lead his team to a GFL title with two huge games on the ground. In the semi-finals, he busted out for 139 yards and three touchdowns on 18 carries. He followed that up in the championship game with another 30 carries for 152 yards and a touchdown. He was a fumble short of a second score as well. Whaley has quite a bit of tread left in his tires and is primed to become the lead back for the Gamblers.

Arkansas is back on top!
Devwah Whaley brings it to the house for @RazorbackFB. pic.twitter.com/PvdLtDTMW5

At Coastal Carolina, C.J. Marable posted impressive numbers. In just three seasons with the Chanticleers, he accumulated 2,691 yards and 29 touchdowns on the ground. He added another 703 yards and 12 touchdowns as a pass-catcher. That earned him an invitation to the Chicago Bears’ 2021 training camp. Sadly, he was unable to earn a spot on the roster. Outside of that, he has no other experience in the professional ranks. He’ll have a good shot at earning a top spot on the roster though as he finds himself among three other backs on the Stallions with little to no professional experience as well.

Unfortunately, injuries have kept B.J. Emmons from finding his true potential on the football field. In high school, he logged back-to-back seasons with more than 2,300 rushing yards. He would go on from there to sign with Alabama in 2016. He entered in hope of following in the footsteps of Derrick Henry, who had chosen to declare for the draft after his junior year. Although, he found it hard to find playing time behind the likes of Damian Harris and Josh Jacobs. After a mid-season injury sidelined him for the rest of the year, Emmons decided to transfer to a community college for a season.

Emmons ended up at Florida Atlantic University, but once again saw an injury derail his season. He got a look from Seattle as an undrafted free agent and another one from the Jaguars last season. You can bet he will be out to prove that he will be out to prove he can be the kind of running back that was worthy of playing for the Crimson Tide. If he can stay healthy, he’ll have a chance to do that in Tampa Bay and climb even higher in these USFL Running Backs Rankings.

In his career at Wake Forest, Matt Colburn II gained 2,550 yards on the ground. That total included 904 yards in his junior year and was good enough to land him as the sixth-best rusher in school history in terms of yardage. The Rams brought him in for a look, but he was unable to make the roster. He also was brought in by the Toronto Argonauts for a tryout. A quick stint with the New York Guardians of the XFL is also on his resume.

RB Matthew Colburn II (@2mjayc) gets the Blues on the board first in the second half to tie this ball game up.

Colburn did flash in the 2020 season of The Spring Leauge. In his three games with the Blues, he registered 47 carries for 305 yards and a touchdown. He also added another eight receptions for 141 yards and a receiving touchdown. As a member of the Stars, he’ll get to reunite with another 2020 Spring League veteran in Bryan Scott. The two should enjoy some early chemistry and will make for a formidable pair when it’s all said and done.

The former Hoosier, Stevie Scott III, finished inside the top 10 in Indiana school history in just about every major statistical category for a running back. He began his college career with 1,137 yards and 10 rushing touchdowns. Scott ended his time in Bloomington with 2,543 total rushing yards. He also accounted for 30 rushing touchdowns. The Saints signed him last pre-season after going undrafted then released him shortly thereafter. Not long after that, the Broncos picked him up. To his credit, Scott lasted right up to the final roster cuts. Sadly, he and Derrick Gore failed to make the Broncos’ regular-season roster. His new head coach, Jeff Fisher, knows a thing or two about how to use his running backs. Scott should do well with his new team.

The book on Garrett Groshek is not a long one. The Wisconsin native walked on the for the Badgers initially as a quarterback. He then transitioned to running back. In his four seasons, he rushed for 1,216 yards and seven touchdowns. Unfortunately for Groshek, he found himself behind Jonathan Tayor for the better part of his college career. Both the Raiders and the Vikings invited him to camp in 2021, but he failed to make either roster. The Maulers will get a moldable, untested back here. Hopefully, he can find his place in the professional football world in Pittsburgh.

During his freshman at New Mexico State, Larry Rose III rushed for 1,102 yards. He followed that up with 1,657 yards on the ground in his sophomore season. By the end of his four years as an Aggie, he accumulated 4,558 rushing yards and 37 rushing touchdowns. To that, he added another 1,157 yards on 133 receptions with five receiving touchdowns. He went undrafted in 2018 and ended up signing with the Titans. When Tennessee waived him a couple of weeks later, he was claimed by the Rams.

He saw some action with the Arizona Hotshots in the AAF appearing in one game alongside the league’s leading rusher Jhurell Pressley. His last field time was as a member of the Los Angeles Wildcats in the XFL. He ended his time there with 16 carries for 30 yards and a touchdown. He’ll be the elder statesman in a young Breakers backfield. Look for him to win the starting job by the start of the season.

Even deeper in the USFL Running Backs Rankings you still will find various amounts of professional experience. Darnell Holland had a successful stint with the Generals of The Spring Leauge. Darius Victor took the field as a member of the New York Guardians in the XFL last year. Reggie Corbin was brought to camp for the B.C. Lions of the Canadian Football League. Of note, Mark Thompson hit camps for Baltimore, Detroit, and Las Vegas.

The final trio of players has all received at least an invite to an NFL camp in their careers. It’s hard to predict just how much, if any, playing time any of them will see should they find themselves on their teams’ opening-day rosters.