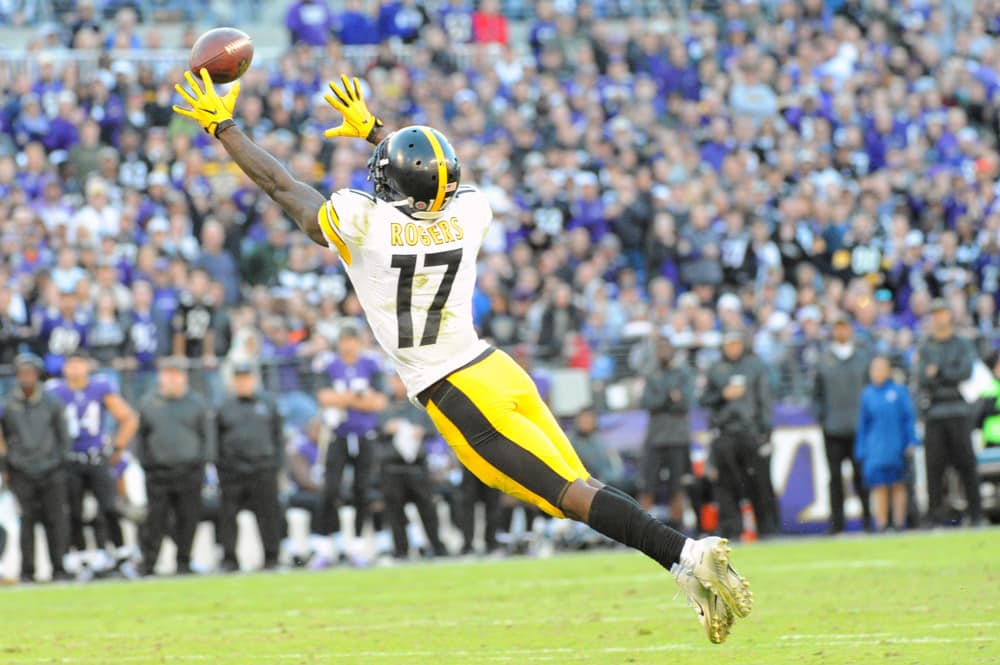 The USFL finalized its rosters with a supplemental draft on March 10th.  Now that the rosters are put together, players will battle it out for starting positions.  One group to watch is the pass catchers.  Both wide receivers and tight ends will do what they can to show why they have the best hands on the team.  The following is a break-down of the entire USFL receiver rankings.  While rankings will likely change as training camps start and players get acquainted with their new offenses, here is our first look.

Quarterback Rankings: A Breakdown of the USFL Quarterbacks

Running Backs Rankings: A Breakdown of the USFL Ball Carriers

The number one pass catcher in the USFL receiver rankings is Eli Rogers.  Rogers has the most NFL experience out of all the pass catches, playing four years for the Steelers.  Receiving 822 yards and four touchdowns in the NFL isn’t the only positive to Rogers’ game.  Head coach Todd Haley was his offensive coordinator in Pittsburgh, meaning he’ll most likely already be familiar with the offense.  Rogers is at the top of the USFL wide receiver rankings thanks to experience and comfortability in the offense.

The second player on the USFL receiver rankings probably isn’t as well known.  At 6-3, Quincy Adeboyejo has a good mixture of height and speed.  He played slot in Ole Miss because of his speed, but his height also makes it tough for cornerbacks and safeties to cover him.  At Ole Miss, Adebeoyejo showed he had a high football IQ.  He will learn the offense quickly and routinely be exactly where the quarterback expects him to be.

The third pass-catching playmaker on the USFL receiver rankings is Shawn Poindexter who has spent time in the NFL with the 49ers.  Poindexter played college ball at Louisville, graduating in 2014.  While some NFL scouts thought he was a little slow for the NFL, Poindexter is a big-bodied receiver who makes a huge impact in the red zone.  During his senior year, 26 percent of his catches went for touchdowns.

Coming in at number four on our USFL receiver rankings, Isiah Zuber started his collegiate career at Kansas State before transferring to Mississippi State.  Zuber is a versatile athlete who can line up all over the field and create mismatches.  He was actually better prior to his transfer.  He had 1,321 yards and 11 touchdowns before having a disappointing senior year.  Despite the down senior year in 2019, Zuber’s athleticism should give him plenty of opportunities to succeed in the USFL.  He’s also had experience in the NFL with the Patriots.

My fifth pass catcher on the USFL receiver rankings is Kavontae Turpin, who has had off-field issues headline his career.  Turpin was removed from TCU his senior year after violating school rules. Prior to his removal from the team after his junior year, it was expected he would be one of the top wide receivers in his draft class.  After the school issues he fell off draft boards and it looked like he would make a team as an undrafted free agent.  However, after a domestic dispute, NFL teams didn’t take a chance on him.  Turpin’s game is built on speed and he has excelled as a kick returner.  He’ll bring that speed to reverses, jet sweeps, slants, and straight burner routes and finally get another chance to prove himself at the professional level.

Coming in at number six on the USFL receiver rankings is Victor Bolden Jr. out of Oregon State.  Like Poindexter, Bolden also spent some time with the 49ers.  In college Bolden was known for being able to get open in space and moving his way past defensive backs quickly.  I expect he’ll do more of that in the USFL and be a nightmare to try and cover.  Look for him to exceed in both yards and touchdowns, which could eventually lead to him moving up in the USFL receiver rankings.

Number seven on the USFL receiver rankings is Devin Gray.  Gray played college football at Cincinnati in 2017.  He spent some time on different NFL teams like the Falcons and the Ravens.  Gray is a playmaker with good on-field speed.  He had 1,304 yards at Cincinnati in two years as well as eight touchdowns.  Gray is a player I think is going to show up and become a reliable target for Bryan Scott.  It wouldn’t surprise me if Gray leads the team in catches by the end of the year.

Hayden Moore and Devin Gray connect once again for a deep touchdown pass to put the #Bearcats back on top. pic.twitter.com/KnpqGoKAoZ

Coming in at number eight on the USFL receiver rankings is six foot five Branden Mack.  Mack has the imposing size and uses his size well to intimidate defensive backs.  He has a huge catch radius and good hands.  He’s also an excellent route runner.  He falls into a perfect offense with the Maulers.  I believe the Maulers are going to run a lot, but not every play.  Look for Mack to be open on play-action and to become a big red zone target.  It wouldn’t surprise me if Mack leads the USFL in red-zone targets by the end of the year.

Another six-foot-five receiver is Osirus Mitchell, who lands at number nine in the USFL receiver rankings.  Like Mack, Mitchell has big hands and a big catch radius.  He is also willing to jump up high on 50/50 balls and will always outjump the defensive backfield.  While Mitchell may end up becoming a little touchdown-dependent, I think he’ll have enough opportunities to put him in the top ten amongst pass catchers.

What a throw, what a catch for the Bulldogs. pic.twitter.com/edIizUFiEr

Number ten on the USFL receiver rankings belongs to Johnnie Dixon who played for Ohio State. Dixon has big-play ability every time he is on the field.  During his 2018 senior year, Dixon’s 8 touchdowns averaged 32 yards per touchdown.  Watching his game tape, it’s easy to see how he is going to be able to get big chunk plays as well as touchdowns.  Dixon’s speed will help him run his routes quickly and outrun the defense.

Johnnie Dixon goes up and gets it from Ben DiNucci! @dallascowboys pic.twitter.com/3XlWJirU42

Spots 11 through 20 of the USFL receiver rankings have a variety of skill sets.  Bailey Gaither and Lance Lenoir both have really good speed.  Brennan Eagles not only has speed but brings a tall frame, standing at 6-4.  Jordan Suell is also a big target, standing at 6-6.  He had 2,184 yards and 27 touchdowns for Southern Oregon and will look to make an impact on the professional stage.  Other receivers on this list have spent a brief time in training camps with NFL teams such as Derrick Willies.  J’Mon Moore had two 1000-yard seasons for Missouri and looks to bring that success to the Generals.

JoJo Ward went in the mock draft held by SGP’s Fantasy Football podcast due to his speed.  Peyton Ramzy was also selected not only because of his infectious energy and attitude, but also his speed and excellent drive.  Ramzy, from Tuskegee, has a chance to move his way up the ranks with fast feet and excellent route-running skills.  Finally, two tight ends make their debut on the first USFL receiver rankings.  Bug Howard and Nick Truesdell are both tall-bodied receivers with huge catch radiuses. I expect both Howard and Truesdell to be excellent red-zone targets.

WOW. So much concentration on display.

The Gamblers have two players in this section, including Anthony Ratliff-Williams out of North Carolina and Brandon Barnes out of Arkansas State.  Barnes has had success in the AAF and XFL and now brings his talent to the USFL.  Wide receiver Chad Williams sits at the 23rd spot on the USFL receiver rankings.  He had a good career at Grambling State and will now bring his talent to a larger stage. De’Quan Hampton comes in at the 26th spot, making him the 5th tight end in the USFL receiver rankings.

Spots 31 through 40 on the USFL receiver rankings start with three tight ends.  These three are all big guys, though Sal Cannella is the biggest at 6-5.  Matt Seybert is another long-armed big target who is fast for his size.  And Joey Magnifico plans on bringing more to the field than just a magnificent name.  In spot 34, Derrick Dillon spent a little time with the Giants in 2020 after graduating from LSU.  Devin Ross was taken in the supplemental draft by the Panthers.  He played well in college at Colorado.  Another Panther, Jeff Badet, could be used on sweeps, reverses, and more as he has very good speed.

Badet has a quick burst that I've noticed, he can make some impressive plays#EastWestShrineGame pic.twitter.com/ECUhW34TtU

Diondre Overton out of Clemson is getting another chance to compete at a professional level after he spent time with the Hamilton Tiger-Cats.  Jeff Thomas joins the Maulers after having played for Miami.  John Franklin sits at spot 39 on the USFL receiver rankings.  He has spent time with the Bears and Buccaneers in his career.  And to round out the top 40, tight end Braeden Bowman out of South Alabama.  Bowman has played for both the Jaguars and the Jets in the NFL.

The 41st through 50th USFL receiver rankings start with five tight ends.  Cary Angeline is a 6-7 tight end who could excel in the red zone.  He’s spent time with the Cardinals and the Eagles in the NFL.  Cheyenne O’Grady had 12 touchdowns at Arkansas, the most by any Arkansas TE.  Connor Davis spent time in the AAF with the Birmingham Iron.  EJ Bibbs out of Iowa State was drafted in the supplemental draft as a tight end, fullback combo.  Hunter Thedford has some professional experience, spending time at the Lions camp after playing college for Utah.

@PackFootball tooooo nice with Cary Angeline and the trick play vs UVA pic.twitter.com/5IFT8DTgZS

The second half of these receiver rankings are filled by wide receivers.  Keith Mumphery may climb the rankings quickly after being taken in the supplemental draft as he has experience catching passes from Jordan Ta’amu.  Joseph Emanuel Hall is a really good outside threat and a versatile athlete.  In college, Jonathan Abrams had 90+ yards in 8/10 games.  He’s known for being able to bring in circus catches.  Jordan Lasley is a former 5th round pick by the Ravens in the 2018 NFL draft.  He’ll look to prove himself again on the professional level in the USFL.  Finally, at number 50, Manasseh Bailey spent some time in 2021 with the Jets.  He’s a quick receiver who should be able to make an impact on the field.

Rounding out our full USFL receiver rankings there are several names to keep an eye on.  Taywan Taylor has NFL experience, playing a couple of years for the Titans.  Tyler Simmons has experience on a big stage at Georgia as well as some experience in the CFL.  “The Invincible” star Vincent Papale’s son, Vinny Papale was drafted by the Bandits.  In the supplemental draft, Tyler Palka was taken by the Gamblers.  He has experience as both wide receiver and quarterback and could take on a Taysom Hill like role.