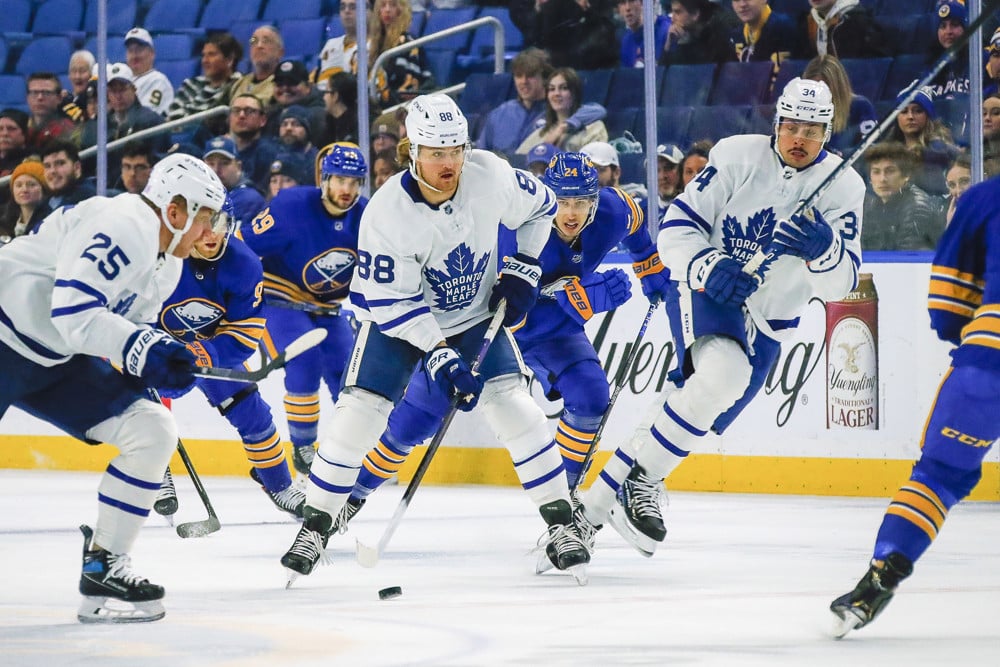 If this is the first you’re hearing of this game, which wouldn’t surprise me, yes! There is an outdoor hockey game today! The NHL has the 2022 Heritage Classic to close out its three outdoor games this season. The Toronto Maple Leafs and Buffalo Sabres will face off at Tim Hortons Field in Hamilton, Ontario on Sunday at 4 p.m. EST. Auston Matthews will look to keep his goal streak alive as the Maple Leafs need to improve in net. Let’s get right into the game, including how to watch, storylines for both sides, betting odds, picks, and predictions.

2022 NHL Heritage Classic – Maple Leafs vs. Sabres: How To Watch

The Maple Leafs come into this game on a bit of a roller coaster. They lost 5-4 in overtime to Arizona on Thursday, on what was a questionable non-call leading to the game-winning goal. They’ll have a bitter taste in their mouths and now they’ll be licking their chops to face the Sabres.

However, it’s not going to be that easy for Toronto. It has had some goaltending issues as of late and starter Jack Campbell is on injured reserve. Petr Mrazek hasn’t been great either and he’s getting the start in this one.

Of course, the Toronto Maple Leafs are led by Hart Trophy frontrunner Auston Matthews. Matthews has an insane 44 goals in 55 games, including seven goals during his four-game goal streak.

All in all, this regular season means next to nothing for the Maple Leafs. As you’ll hear on the Hockey Gambling Podcast, all that matters is their performance in the playoffs.

While the Maple Leafs enter this game on a low, Buffalo is riding sky-high. The Sabres had arguably their win of the season on Tuesday night, beating Jack Eichel and the Vegas Golden Knights in his return to Buffalo 3-1. It was the third win in Buffalo’s last five games, starting with a 5-1 win in Toronto.

Tage Thompson has come into his own this season with 42 points (23 goals, 19 assists) in 55 games. The acquisition of Alex Tuch (in the Eichel trade) has helped as well. Tuch has 24 points (eight goals, 16 assists) in 27 games. Those two have actually worked quite well together. Thompson’s surge coincided with Tuch’s debut as the youngster has 24 points (13 goals, 11 assists) in his last 25 games.

This is another rebuilding season for the Sabres, but they’d love to spoil the Maple Leafs’ outdoor game in the Heritage Classic.

There’s no fun in betting on the Maple Leafs in this game. At -275, the moneyline is really too high to lay the juice on a team that’s been struggling a bit. Plus, anything can happen in an outdoor game. I’d say take the puck line and hope for a blowout, but you don’t even get plus-odds on the puck line with -1.5 at -110.

Buffalo won 5-1 in Toronto just 11 days ago. Why can’t the Sabres do it again?

However, my best bet for this game is on the total.

Toronto has allowed at least four goals in five straight games and eight of its last 10. Buffalo has shown that it can score with at least three goals in six of its last 10, including five in back-to-back games against Toronto and Minnesota.

The Maple Leafs can score in bunches and they might need to with Mrazek in net.