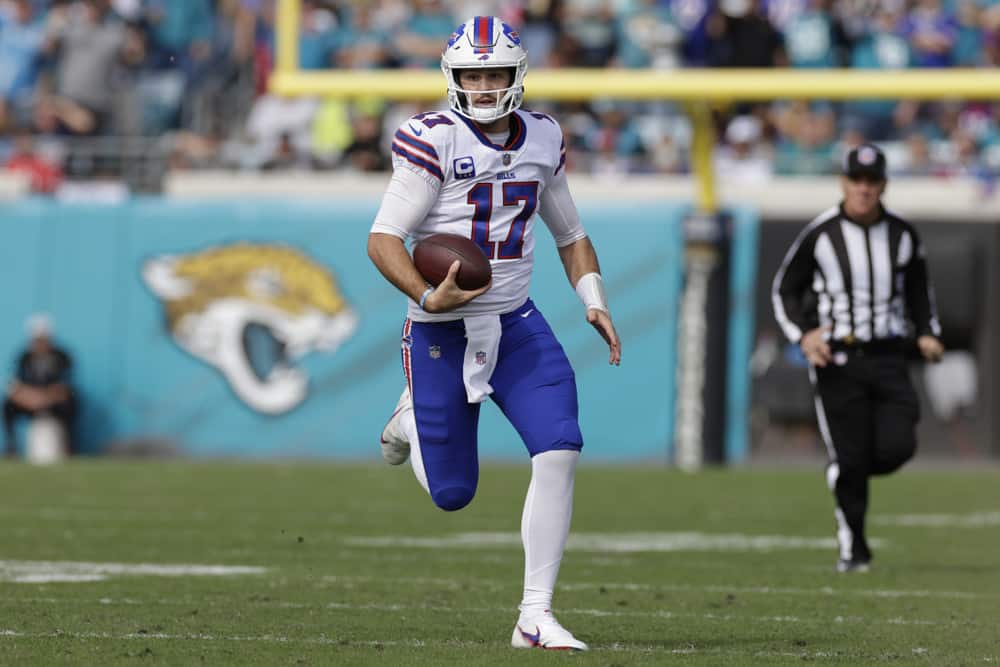 If you haven’t reviewed one of our Fantasy Football Dynasty trade value charts before, here’s a little on the methodology. The rankings system we use takes FantasyPros best, worst and average rankings. We also throw in a little standard deviation, just to count all variables. Obviously, you have to consider average fantasy football points per game, because that’s what fantasy football is all about.

Another metric that comes into play with the dynasty chart is a player’s age. Somebody who is 22 is going to have more weighted value than a player that is 32. Is that saying the 22-year-old players are always more talented than a 32-year-old? Absolutely not, it’s just something that is considered in dynasty value because, at 22, the player will likely be around longer. Taking all that into consideration and running it through our formulas, we are able to assign a value for each player. This value can be used to help weigh your fantasy football trades and improve your future team!

As our data continues to build, we’re working on a change since last month in the last column. As you can see, a lot of players went down, which is sort of a reset on the year as we wait to see how free agency and draft affects everybody. The top quarterbacks aren’t much of a surprise. Finishing in the Top-2 in QB fantasy football points the past two years, Josh Allen holds the top spot. Gun-slinging Patrick Mahomes comes in second just behind him. The number three spot belongs to Justin Herbert, who continues to improve and lead the Chargers to wins.

The guy that grabbed the top spot overall last year and never let go is still at the top. After a great year, Jonathan Taylor keeps his top spot on the fantasy football trade value chart. The next two also remain the same, with Najee Harris having an amazing rookie year. Even with injuries, Christian McCaffrey has high value due to his talent when he’s healthy and on the field. Moving up the ranks, D’Andre Swift grabs the 4th spot after a great year on a bad Lions team. While his injury concerns are still there, he proved he can be an RB1. And 5th on the fantasy football dynasty trade value chart is Austin Ekeler, who is electric out of the backfield as a runner and as a pass-catching back.

Another rookie, Javonte Williams, is just outside of the top 5. Questions surround Alvin Kamara due to the coaching change, Derrick Henry due to his huge usage, and Saquon Barkley due to durability concerns. After a slow return in the playoffs with a low yards per carry, Cam Akers is a name to watch as the Rams backfield develops going into next year.

My 2022 redraft rankings are updated. These are my top-12 players:

The wide receivers are stacked at the top and any of the top five are great pieces to have on your fantasy football dynasty. After an electric rookie year, Ja’Marr Chase sits atop the wide receiver fantasy football trade value chart. Right behind him is Justin Jefferson, who continues to be a big piece of the Vikings offense. No receiver had a better year this year than Cooper Kupp, but his dynasty trade value is weighted down a little due to being older than Chase and Jefferson. The oldest guy in the top 5, Davante Adams remains an elite wide receiver. Eyes will be on him in the free agency and his value will most likely change with where he ends up.

Last, CeeDee Lamb is a reliable receiver who I expect the Cowboys to get even more involved next year. Multiple other receivers could have ended up in the Top-5 of the fantasy football dynasty trade value chart. Several of them are Tyreek Hill, A.J. Brown, and Deebo Samuel, who are all excellent receivers and could lead your team week in and week out.

The tight end position remains a frustrating one in fantasy football. If you don’t have one of the top guys, it is hard to depend on the others for consistency. The guy that grabbed the top spot this year towards the end, Mark Andrews, remains at the top as he’s been a go-to for Lamar Jackson. Rookie Kyle Pitts broke the oft-believed standard that rookie tight ends don’t make much of an impact. Due to his age, Travis Kelce falls down on our list. He is still an elite tight end option for your fantasy football dynasty, but he is on the back end of his career. While he sometimes battles injuries and inconsistent quarterback play, George Kittle is fun to watch. His high energy and fun personality reflect in his play as he fights for every yard.

Coming in 5th and missing time due to injury, Darren Waller is also a very talented tight end to grab for your fantasy football dynasty. All of these guys have moved around on the fantasy football trade value chart, but they are the top heading into next year.