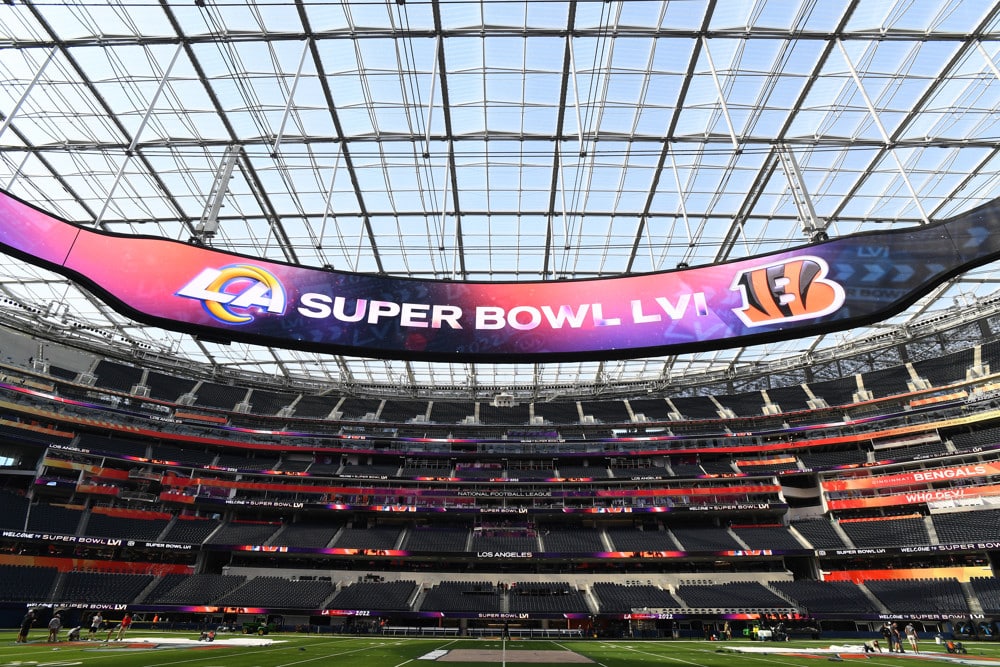 Here we are, Super Bowl bound!  It’s the last NFL betting opportunity of the 2021-22 season.  Right now, you might be sitting there trying to think of all the different ways you can bet on the big game!  The amount of money placed on the big game is expected to reach over $8 billion and you don’t want to miss out.  But before you go spending all your bankroll guessing the color of Gatorade, you have to check out Thrive Fantasy’s Super Bowl Contest.

What Is Thrive Fantasy?

The thing that makes Thrive Fantasy so awesome is that the contests combine both a DFS feeling and prop bets.  Contestants choose the over or under on 10 prop bets that they get to select.  Thrive Fantasy’s Super Bowl Contest contains 20 prop bet options.  On top of your 10 prop bets, you’ll pick two more bets, called ICE bets.  An ICE bet is an in case of emergency bet.  The idea behind those is if one of the players you picked for a prop bet doesn’t play, you’ll have two backup option props that will swap in if needed.  Props are weighted by a set amount of points.  The more unlikely the prop is to hit, the more points it is worth.

Now let’s take a look at some of the props you can choose from and the over or under that I like.  And don’t forget if you don’t have a Thrive account yet, you can get one here.

We’ll start with Cooper Kupp, who took the fantasy world by storm this year.  Thrive Fantasy’s Super Bowl contest has Kupp’s prop bet set at over/under 7.5 receptions.  If you pick the over and hit it, it’s worth 75 points.  If you pick the under and hit it, it’s 125 points.  Kupp went over 7.5 receptions in two of his three playoff games.  The Bengals have allowed over 7 receptions to a single pass-catcher only once in the playoffs.  That happened to be tight end Travis Kelce.  Still, you can’t help but think McVay is going to want to get the ball to Kupp early and often.  He’s been matchup proof and hard for anybody to guard all season.  Kupp eclipsed 7.5 receptions in 10 of his 17 games this year.

With all the hype you’ll hear about the Bengals passing game, Joe Mixon gets a little overshadowed.  Still, Mixon had his best statistical year in yards, rushing touchdowns, receiving yards, and receiving touchdowns.  I know Mixon only has one touchdown in the playoffs through three games and the Rams have a tough defensive line.  However, Mixon scored at least one touchdown in 11 of 16 games this year.  In five of those games, he had more than one touchdown.  I think in order to limit the Rams offense the Bengals are going to have to lean on the run and control the clock.  The Rams have allowed three rushing touchdowns in the playoffs.  Thrive Fantasy’s Super Bowl contest only needs Mixon to score one touchdown to hit the over.

After Robert Woods was injured, it looked like Van Jefferson would be the guy.  Until this receiver named Odell Beckham Jr. showed up.  Still, Jefferson has had some flashes of play-making ability with some very big plays, but the receptions haven’t been there consistently, especially in the playoffs.  Thrive Fantasy’s Super Bowl Contest has him set at over/under 2.5 receptions.  He hasn’t had more than two catches in any of the playoff games.  He was under 2 catches in 7 of 17 games in the regular season.  He’s also been under 2 catches half of the games since Odell was acquired.  The number is set at the exact right spot, making it a tough call.  However, taking two lower-valued picks in my first two, I wanted something that would be split a little more evenly at 100 points for both over and under.

Few quarterbacks, if any, have had the swagger Joe Burrow has had this year.  He’s had a great comeback from the horrific leg injury in 2020.  Thrive Fantasy’s Super Bowl Contest has Burrow’s passing yards at over/under 282.5 yards.  It may seem like easy money to just hammer the over on his passing yards.  However, he’s only eclipsed 282 yards once this post-season.  Furthermore, the Rams have only allowed one passer over 282 yards in the playoffs.  And that was some guy named Tom Brady.  While it’s easy to remember how Burrow combined for 971 yards in his last two regular-season games, he only eclipsed 282 six times this year.  Burrow faces arguably the best defensive line he has all year, and I don’t think he’ll have the time to sit back and sling bombs all day.

Speaking of great comeback stories, Cam Akers has also come back quicker than expected from a bad leg injury.  Thrive Fantasy’s Super Bowl contest has his prop bet set at over/under 62.5 rushing yards.  This seems a little high since Akers hasn’t gone over 62.5 yards yet this postseason.  The Bengals however, have allowed over 62 rushing yards to a running back in all three playoff games.  Akers is splitting carries with Michel, and I don’t feel he’s found his rhythm yet.  I think this line reflects more of game flow if you believe the Rams can get up early and then grind the clock.

What a year for Matt Stafford, who has performed pretty well statistically every year, but finally landed on a team that helped him turn those stats into success.  Thrive Fantasy’s Super Bowl contest has his prop set at over/under 27.5 completions.  Stafford’s last two playoff games have exceeded 27.5 completions, while the wild card round saw him only complete 13 of 17 passes.  However, during the regular season, Stafford only went over 27.5 completions twice.  If you think the Rams will get up early, keep the lead, and control the clock, this one is a no-brainer.

Reaching his first Super Bowl, Odell Beckham Jr. went from free agent to wide receiver two on a playoff-contending team quickly.  Thrive Fantasy’s Super Bowl contest has his prop set at over/under 60.5 yards.  If you’re the Bengals, you’re going to do everything you can to limit Cooper Kupp.  And while that contradicts my Van Jefferson prediction of under 2.5 receptions, I think trying to limit Kupp, boosts Beckham’s upside.  Since joining the Rams, Beckham has only exceeded 60.5 receiving yards twice in eight regular-season games.  Will he be the Beckham that made a catch nobody has stopped talking about?  Or will he be the Beckham that fights kicking nets?  We will soon find out, but I think he’s matured more than some give him credit for.

While I expect most to zig when it comes to Tyler Boyd, I’m going to choose to zag.  Yes, I know he hasn’t gone over four receptions in the postseason.  In fact, he hasn’t gone over four receptions since Week 15.  Thrive Fantasy’s Super Bowl Contest has his over/under receptions set at 4.5.  This seems too easy to take the under, therefore my gut is telling me to take the over.  Ramsey will work on limiting Jamar Chase.  After two solid games against the Chiefs and the Titans, the Rams defense won’t take Higgins lightly either.  I think this will give slot receiver Boyd some advantages.  I also feel Burrow may have to make some quick throws due to defensive pressure.  That may require him to look at the slot position more often.

Nobody expected the season Ja’Marr Chase has had this year.  The rookie has been elite all year. But, Sunday’s Super Bowl could end up being a tough game as Jalen Ramsey will most likely shadow him.  Thrive Fantasy’s Super Bowl Contest has Chase set at over/under 80.5 total receiving yards.  Chase has exceeded 80.5 receiving yards in two of three playoff games.  Surprisingly though, for how great his season has been, he’s only gone over that mark six times in seventeen regular-season games.  And while Ramsey may not be as elite as he used to be, he’s still a very solid cornerback.  He’s allowed over 80.5 receiving yards only twice all year.  Sure, the two times have been in the last three games, but I expect him to step up to prove he can stop the young rookie.

Ja'Marr Chase DUNKING on the corner for the TD pic.twitter.com/XZvq9sSVMw

Those are my picks for Thrive Fantasy’s Super Bowl Contest.  If all hit, the point total would be 950 points.  Don’t forget you can sign up for Thrive here.  Good luck!