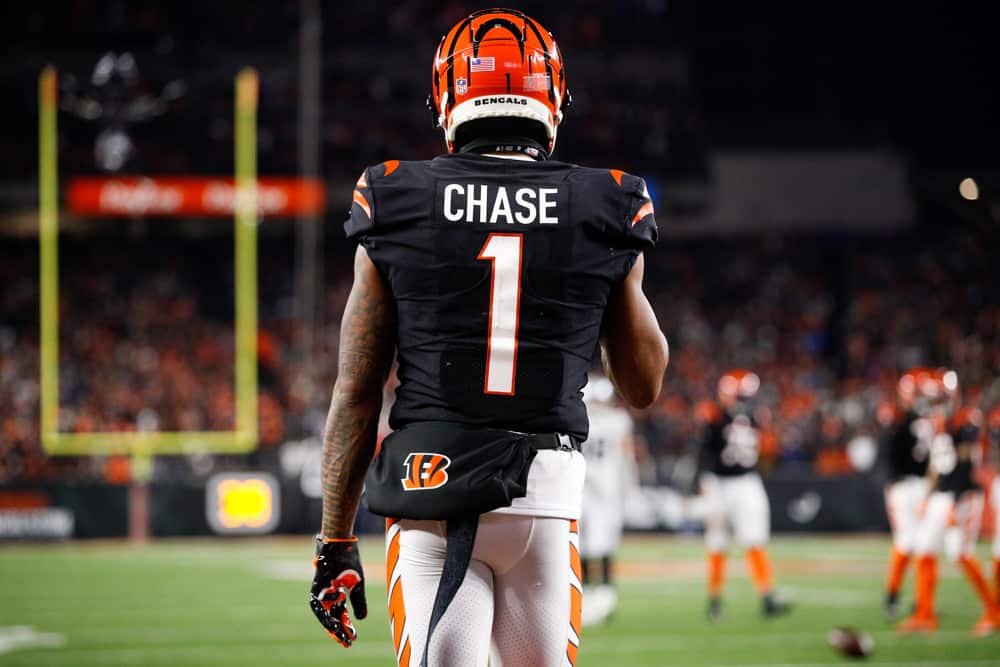 There are hundreds of ways to bet on the Super Bowl. But a great way to do it is with cross-sport props. Not only does it give a gambler a rooting interest in two sporting events, but it’s also an opportunity to maybe get a line that beats a player’s standard Super Bowl over/under. With that said, here are some of my favorite Super Bowl and Golf Cross Sport Props this week.

On this book, the over/under on Joe Mixon rushing yards is 63.5. That’s the theoretical line for what Jon Rahm would have to beat for Round 1.

First off, that’s a really, really low number that Jon Rahm would have to beat. What’s great about Jon Rahm is how tremendously consistent he is round to round. But he’s not explosive. And an explosive round is what he would need to beat the book’s set line.  In 20 rounds, the best round Rahm has ever posted at the Waste Management Phoenix Open is 65. He’s only done that twice. While Rahm rarely goes over par in a round at TPC Scottsdale, his performances are fairly predictable. His 1st Round score will likely hover around 67.

Meanwhile, Joe Mixon has his work cut out for him at the Super Bowl. He’s up against the Los Angeles Rams, who boast the 5th best Rush Defense in DVOA. Since their bye week, only the 49ers and Ravens have a featured RB who has gained more than 63.5 yards on the ground against them. Both those teams typically have very good rushing offenses.

The Bengals, however, do not possess an efficient one. They were 20th in Rushing Offense DVOA and 2021 and 15th in Adjusted Line Yards. Considering their Open Field and 2nd Level Adjusted yards are also league average, it seems like neither Joe Mixon was very efficient nor do the Bengals do enough up front to help Mixon find holes. That might explain why Mixon only has four games with more than 70 yards rushing since October.

The Bengals will have a tough time against the vaunted Los Angeles Rams defensive line. Unless Mixon breaks a long run, I don’t see them having tremendous success on the ground. And considering Mixon likely won’t get a boost with a comically low round from Rahm on Thursday, he won’t have as many rushing yards as Jon Rahm strokes in the 1st Round.

The over/under on Matthew Stafford pass completions is hovering around 24.5. So that’s the target number to aim at for players under par at the 2022 Masters. Unfortunately for gamblers, this is a prop that you’ll have to sit on for two full months. But for those who can wait, this one could be fun to sweat on Masters Weekend.

The problem with attempting to handicap this prop is that scoring at Augusta National isn’t a constant. It is entirely dependent on the weather. When Augusta National has calm wind conditions, receives rainfall to soften up the golf course and the temperatures are warm, players can go low there. But when it’s cold, it plays firm or the wind is up, scoring can be incredibly difficult to come by.

Unfortunately, there is little we can do to predict what the wind conditions will be. But we have some tools at our disposal to try and tell us how the air temperature and softness of the golf course may be. Per Accuweather, temperatures in Late March and Early April are on track to be quite warm. The long range forecast for Masters Week is calling for temperatures to hover in the upper 70’s and low 80’s all week. That will allow the ball to fly farther in the air, making Augusta National play a little easier. And according to the 2022 Farmers Almanac, it’s expected to be a pretty wet spring in the Southeast. If the golf course plays soft, that will also make scoring conditions a little easier.

Obviously, the wind can throw a huge monkey wrench into this. But if the 2022 Masters sees similar weather conditions as the 2020, 2019, 2018, 2015, and 2011 events, then the new over/under that Stafford has to beat rises by 12 completions. Stafford only eclipsed 30 completions in a game twice all season. And it appears like the sharp angle on this game is Rams and the under. That likely means less passing volume for the Rams should they be nursing a lead late in the game.

If we trust the farmers and the sharps, then there’s some value that more players will finish the 2022 Masters under par than Stafford completions in the Super Bowl.

The over/under on Ja’Marr Chase receiving yards is 79.5. That sets Hovland’s over/under 4th round score at 65. And because this is a 4th round matchup, if Hovland misses the cut this bet is no longer available. Check to see if he makes the cut first before laying this bet. Otherwise, it’ll be No Actioned.

Hovland has only played the Waste Management Phoenix Open once, and it did not go well for him. But he’s a much more refined and dangerous player now. Hovland always was a great ball striker, but he’s bulked up his physique and added a tremendous amount of power to his game. And he’s capable of very explosive rounds. But regardless of how you feel about Viktor Hovland, this prop comes down to how you feel about Ja’Marr Chase. It’s pretty unlikely, given the limited range of outcomes of Hovland are between, say, a 63 and a 73, that you really are worrying how Hovland’s 4th round will alter Chase’s target number.

There’s a narrative that Jalen Ramsey will shut down Ja’Marr Chase in the Super Bowl. But that’s faulty logic for a few reasons. First, Jalen Ramsey doesn’t shadow. His highest shadow rate came in the Divisional Round where he trailed Mike Evans on 69% of his routes. Otherwise, the Rams move him around the formation as they see fit, not move him around for a specific player.

While he’s reportedly lobbied to make Chase his primary assignment, I don’t think the Rams will deviate from that game plan. Tee Higgins is a very capable receiver in his own right and can torch defenses too. And Tyler Boyd is one of the better slot receivers in the NFL. It actually might be better off for the Rams to put Ramsey on Tee Higgins and double team Chase, similar to how the Patriots deployed Malcolm Butler. Regardless, I think the narrative that Ramsey will shadow Chase is overblown.

Taking that out of the equation, #1 receivers have found success against the Rams in 2021. Mike Evans, Davante Adams, Deebo Samuel, Brandin Cooks, DK Metcalf, and Justin Jefferson all had more than 80 yards receiving against the Rams this year, higher than Chase’s over/under. The only stud receivers who did not have a good day against the Rams were A.J. Brown and DeAndre Hopkins. Both were suffering from nagging injuries all year long. And overall, the Rams allowed the 4th most yards per game to Wide Receivers in 2021.

There’s also a decent correlation between Ja’Marr Chase’s great and poor receiving yard performances in 2021. The Bengals played 9 games against opponents who allowed above-average receiving yards to WR’s. Chase amassed 64% of his total yards in these games. In the 11 against below average WR yards allowed, it was only 36.2%. When presented with defenses that yielded a ton of yards to wide receivers, the Bengals found ways to allow Chase to have success. Against ones that limited yards to receivers, the Bengals struggled to get Chase going.

One way or the other, the Bengals will find ways to get Ja’Marr Chase the ball against the Rams. Either by moving him around the formation or simply trying to have him make a play, he’ll put up decent receiving totals in the Super Bowl. And that total should cover Hovland’s 4th round score by more than 14.5 yards.