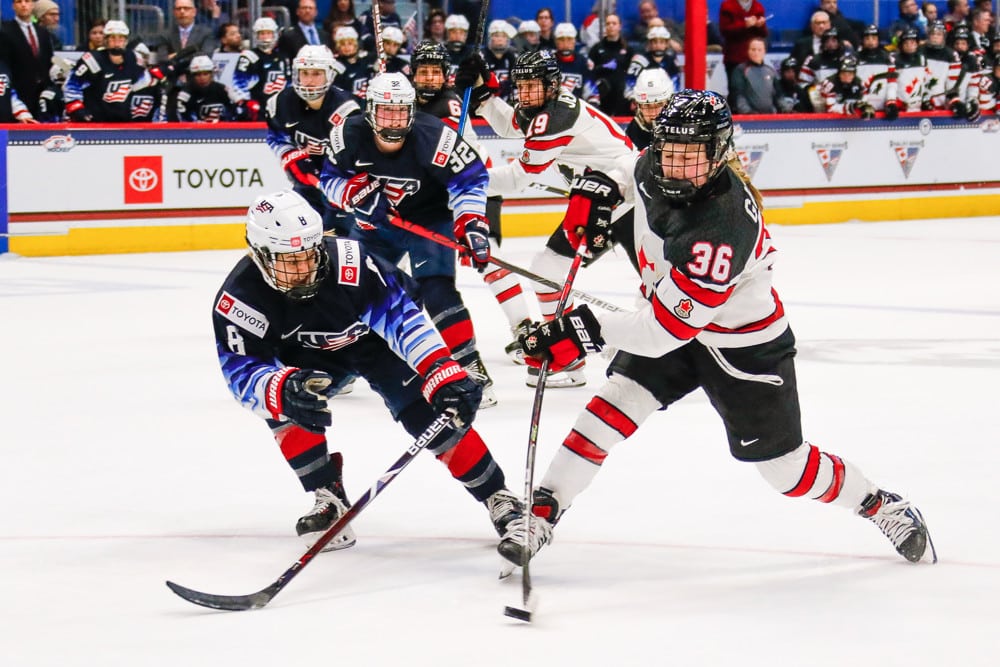 The 2018 Olympic gold medal game produced one of the most memorable endings in women’s hockey history. With the 2022 Beijing Olympics fast approaching, a rematch between the United States and Canada on the game’s biggest stage seems to be written in the stars. We’ll get into that and more in our 2022 Olympic Women’s Ice Hockey Preview, Odds, & Betting Picks.

Per the international women’s hockey scene usual, the field is fairly top-heavy but populated by some entertaining rosters and first-time appearances for some nations. Let’s look at the potential picks.

The women’s tournament has been expanded to include 10 teams as opposed to eight to accommodate the growth of international women’s hockey programs in Europe and Asia. To ensure a competitive balance, given the historic dominance of the upper-echelon teams like Canada and USA, the top five teams have all been lumped into one weighted group with automatic qualification for the knockout rounds.

Group B will have a much more level playing field, with the potential for exciting upsets. Czechia and Denmark will each be making their first appearance at the Olympics in women’s ice hockey, while Sweden, a tournament mainstay with silver and bronze medals in their program’s history, will have their backs against the wall after a disheartening seventh-place finish in 2018.

The United States is the reigning gold medal-winners after a thrilling shootout victory over Canada at Pyeongchang in 2018. They come in as the odds-on favorite despite their most recent preparation for the 2022 Olympics being the Rivalry Series with Canada, in which they lost four games to two.

Regardless, the path to Gold runs through the Americans.

While the Lamoureaux twins (Monique and Jocelyne) have retired since Jocelyne’s iconic “Oops I Did It Again” shootout move in the 2018 gold medal game, Team USA still packs a punch with Brianna Decker, Amanda Kessel, and Hilary Knight still very much leading the way.

Canada reached perhaps an all-time low point following their shootout loss to USA in the gold medal game in 2018. They failed to reach the gold medal game in the 2019 IIHF World Championships for the first time in tournament history. They settled for bronze by blowing out Russia instead. However, they reclaimed gold at the 2021 tournament in Calgary, besting USA 3-2 in overtime.

Given women’s hockey tournaments almost always boil down to USA-Canada, the biggest deciding factor may be this: four of their matchups against each other this year have ended in overtime, with Canada winning three of the four. Specifically, Marie-Philip Poulin won three of the four, including the Golden Goal at Worlds.

Finland is usually a safe bet to play in the bronze medal game, having won three bronzes in six Olympics. The catch: they normally get there by riding goaltender Noora Räty, arguably the best goaltender in the world. Räty was not listed on the Finnish roster, as general manager Tuula Puputti has named Anni Keisala as the team’s starter ahead of the Olympics.

Keisala performed extraordinarily well at Worlds in 2021, leading Finland to bronze with a 1.43 goals-against average and .949 save percentage, but the transition from an all-time great like Räty to a 24-year-old Keisala making her first Olympic appearance at the very least should give bettors pause.

Russia finished in fourth at the 2019 World Championships, a marked improvement from being blown apart in most Olympic contests. They lost the bronze medal game in Pyeongchang to Finland by a 3-2 score, but prior to that game had suffered four major losses: Canada 5-0, Finland 5-1, USA 5-0, and Canada 5-0.

They have some bright stars up front like Anna Shokhina, a tremendously skilled playmaker who led Russia in scoring at the ’18 Games, and veteran power forward Olga Sosina, making her fourth Olympic appearance. Ultimately though, Russia is playing for a bronze medal at best, lacking the firepower or the stability defensively to hang with the North American superpowers.

Switzerland held their own at Worlds in 2021 despite being down their top player in Alina Müller, beating Russia in the quarterfinals 3-2 and falling just short in the bronze medal game to Finland 3-1. The Swiss will have a changing of the guard in net at this Olympics, as legend Florence Schelling has retired and passed the torch to Andrea Brändli. They are a fun group, but not necessarily one built to win a medal.

Sweden’s path to the quarterfinal may be a bit easier given the lack of experience in Group B. Once competing for silver medals, Sweden has fallen on hard times, relegated from the top division for the first time in program history after finishing ninth in the 2019 World Championship. Coaching drama and player unrest led to a strike in 2019, a pivotal moment for the program. Now that the Swedes are back in a major tournament, with captain Emma Nordin leading the way as a prominent goal scorer, they find themselves surrounded by inexperienced opponents and a big chance to win their group and get back to international relevance.

It will come down to USA and Canada. Like it always does. And when that happens, given their recent history, it’s been a coin flip. And in any toss-up scenario, bet on Marie-Philip Poulin. Her line with Victoria Bach and Brianne Jenner is unmatched when it comes to setting up high-danger scoring chances, and Poulin’s penchant for the clutch could easily mean another 3-2 nail-biter decided for the Canadians.

Sweden to win Group B

Keep an eye out for odds on this one. Czechia and Denmark will put up a spirited fight in their group, but neither is really ready for advancement very far in the Olympics yet. That leaves China, a mega-long shot as the host nation, and Japan, who held their own against Sweden in 2018 but has historically struggled to score. This seems like the ideal get-right group for Sweden as they try to march out of the darkness and into the quarterfinals.