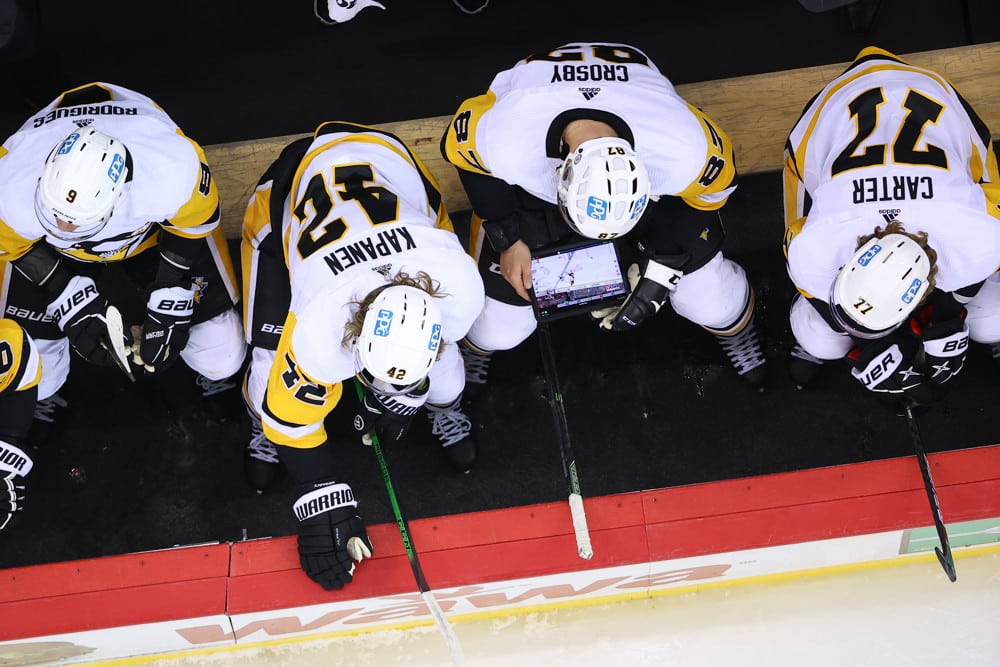 We are back with another Fantasy Hockey weekly primer! It’s another busy week in the NHL with over a dozen teams playing four games.
We’ll take a look at those teams to stream, players to target, waiver wire claims, backup goalie options, and more!

For this week’s column, I’ve made an effort to give a wider range of players to target for those of you in shallow, standard, and deep leagues, with both a forward and defenseman recommendation for each team as well.

I’m looking at the five teams this week that play four games with three on “lighter” nights. Those nights are Monday (7 games), Tuesday (8) Wednesday (5), Friday (5), and Sunday (7). There are also 10 games on Thursday and 11 games on Saturday.

Let’s get right into it!

The Bruins play on all four lighter nights this week. Here are a few players to consider adding for Week 15.

Hall is a guy that should be available in more shallow leagues and may still be available in some standard leagues. I’ve been pumping Taylor’s tires for a few weeks now and I hope you hopped on board.

The second-line winger is on a unit with Erik Haula and David Pastrnak while also getting time on the second power-play unit. Hall has 12 points (3 goals, 9 assists) in 12 games since the holiday break, with 25 shots on goal as well.

Hall should be rostered in your league, so let’s look at a guy that is available in the majority of leagues.

Grzelcyk is back for the Bruins after missing two games. He’s a guy to watch for this week and beyond. The top-pair defenseman averages 19 minutes a night and has 16 points (2 goals, 14 assists) in 36 games this season. He also has 70 shots on goal, 42 blocks, and 17 hits.

The defenseman is on a two-game point streak with a power-play assist in each of his last two games. He has eight points (one goal, seven assists) in his last five games.

Finally, let’s look at a guy that should be available in some of the deepest leagues. Erik Haula was on this list last week and continues to be under-rostered. He has Hall and Pastrnak on his wings giving him plenty of chances to pick up points.

Haula had two points (both assists) in three games this week and has 9 points (2 goals, 7 assists) with 20 shots on goal in 12 games since the break.

Both of these goalies are worth adding if they are available in your league. The Bruins are one of the best teams since the holiday break and these two should continue to split starts for now. Boston doesn’t have any back-to-backs this week so keep an eye on its goalie usage.

The Avalanche also play all four games this week on lighter nights, with off days in between.

Burakovsky is a player to look at in more shallow leagues but don’t be surprised if he isn’t available. The winger is getting time on the second line with Nazem Kadri, who is having a career year. Burakovksy is also on the second power-play unit.

It’s also worth mentioning that Burakovsky usually moves up to the top line with Nathan MacKinnon if one of Gabriel Landeskog or Mikko Rantanen is out.

Moving down a little bit to 62% rostered we have Girard. The defenseman plays on the second pair and second power-play unit. He plays nearly 22 minutes a night as well.

Girard has 23 points (4 goals, 19 assists) in 37 games this season, including seven points since the holiday break and four points in his last four games.

Nichushkin has been sneaky good for the Avalanche this season. He’s currently playing on the second line and has three points in just five games since the holiday break. Overall, he has 19 points (11 goals, 8 assists) in 23 games this season.

If he can stay healthy, Nichushkin is a guy that should pick it up both in terms of scoring and rostered percentage.

Finally, a suggestion for deep leagues. Newhook is the Avs’ third-line center and also plays on the second power-play unit. He has two goals in his last four games and could see similar production this week against mostly weak teams.

Francouz doesn’t have a guaranteed start this week with Colorado having days off between all four games, but it wouldn’t surprise me if he gets at least one crack at it. He’s been impressive this season going 5-1-0 with a 2.40 GAA and .922 SV%.

Monday at Philadelphia
Tuesday at New Jersey
Friday vs. Washington
Sunday vs. Boston

The Stars have a quick back-to-back to begin the week before two days off.

Seguin was in the midst of a huge coldspell before the holiday break. He had just three goals in 14 games between November 20th and December 20th. But he’s come out hot in 2022. He has eight points (five goals, three assists) in 10 games since the break.

Seguin is getting even hotter right now with a three-game point streak (three goals and three assists). The forward centers the second line with Jamie Benn and Denis Gurianov and is also on the top power-play unit.

If someone got fed up with Seguin and he hasn’t been scooped off the waiver wire, go get him.

Lindell plays on the second pair and doesn’t see power-play time, but he’s been worth watching as of late. Overall, the defenseman has 11 points (3 goals, 8 assists) with 80 shots on goal and 78 blocked shots in 38 games this season.

He’s picked that up recently though with five points (two goals, three assists) and 16 SOG in his last six games. The defenseman is hot and should be available in your league.

These two have played pretty similarly this season with Holtby starting 18 games and Oettigner starting 13. They should each get at least one start this week with the back-to-back on Monday and Tuesday.

Hotltby holds a 2.68 GAA and .913 SV% while Oettinger is slightly worse at 2.73 GAA and .905 SV%. Still, Philadelphia and New Jersey provide Dallas with two easier opponents to begin the week.

The Rangers play four times this week, three games coming on lighter nights. They do have one back-to-back as well.

Strome is another player that shouldn’t be available and you should absolutely snag if you can. The center plays with Artemi Panarin on the second line and is on the top power-play unit as well.

He has 31 points (nine goals, 22 assists) and 81 shots in 38 games this season and has been outperforming that recently. Strome entered the break hot and has kept that up with 13 points (4 goals, 9 assists) in his last 15 games. That includes 10 points (3 goals, 7 assists) in 12 games since the break, and five points (one goal, four assists) in his last five games –– he was held pointless in only one of those games.

Go pick up Strome if you can.

I recommended Lafreniere a few weeks ago and he quickly paid dividends. However, he’s completely cooled off sicne then with no points in his last six games.

This is a pure opportunity play. Lafreniere is on the top line with Mika Zibanejad and Chris Kreider, so he should be putting up points. He’s also on the second power-play unit.

Lafreniere is towards the bottom of the list in players I’d target for this week, but he’s a decent candidate in deeper leagues if you like his first-line upside.

Georgiev should get at least one start this week with the Rangers playing four times, including one back-to-back.

Keep an eye on that if your league is stringent on goalie stats, but if you just need someone to rack up saves, Georgiev is your guy.

Tuesday vs. Arizona
Thursday vs. Seattle
Friday vs. Detroit
Sunday vs. Los Angeles

The Penguins play four times this week at home, thrice on lighter nights. They have one back-to-back in there as well.

Another week, another Jeff Carter mention. He’s up 5 points in Rostered % from 39% last week.

Carter is up to 25 points (12 goals, 13 assists) in 35 games this season. Last week, he had points in three of four games with one goal and four assists for five points to go along with nine shots on goal.

He’s centering the third line, but could get bumped up to the second line on the wing as Evan Rodrigues has cooled off. Carter also centers the second power-play unit.

Another familiar name here in Kapanen, who is up 2% from 18% Rostered last week.

Kapanen has been bumped down to the third line, but he’s playing with the aforementioned Jeff Carter. He has 24 points (9 goals, 15 assists) in 40 games this season, including four points (one goal, three assists) this week.

If Carter isn’t available, Kapanen should be. He is also on the second power-play unit.

For those of you in deep leagues, or perhaps those not if you want someone to keep an eye on, we have Danton Heinen.

Heinen is on the second line with Evgeni Malkin and Rodrigues, and he’s on the second power-play unit with Carter and Kapanen as well. He missed four games due to COVID but picked up an assist in each of his last two games –– to go along with seven shots in those two games combined.

Heinen is another second-line upside play for those in deeper leagues.

Along with these five teams, eight others also play four times this week.

Despite the busy week, some teams are only playing two games. You’re going to want to avoid streaming players from these teams.