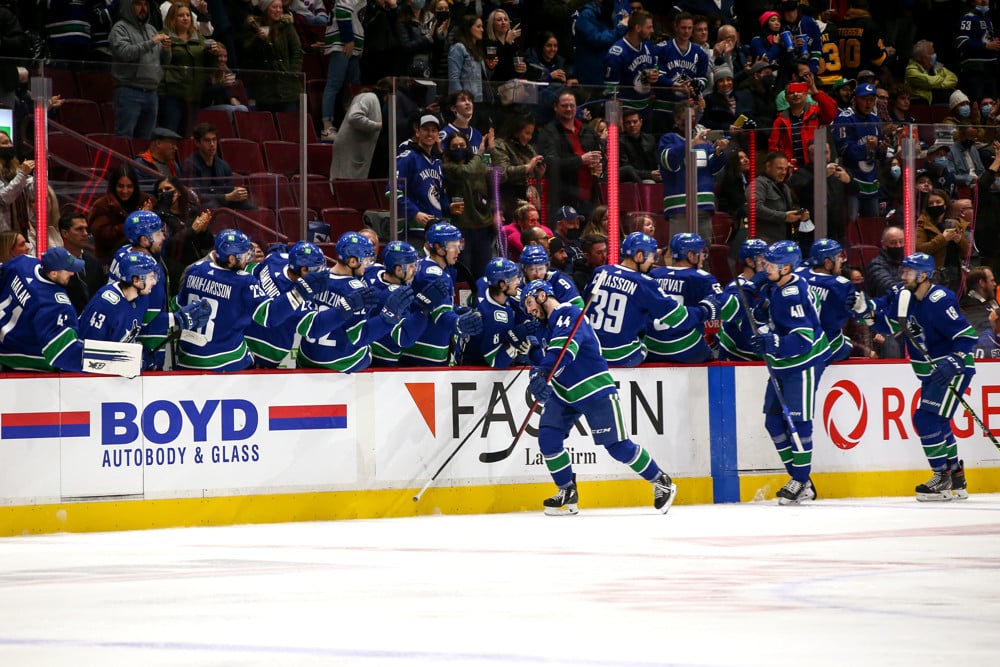 As Fantasy Hockey approaches its halfway point in the season your league’s playoff outlook is becoming clearer and clearer by the day. You may be in the toilet bowl of your league trying to make a final push to sneak out of that spot and into a playoff spot or you could be in a position where you are fighting for a top position in your league in hopes of getting a solid matchup and a possible Round 1 bye. No matter which of these positions you are in any points you can put up are important to every matchup.

While getting heavy goal scorers is always good for your stats, they are very hard to come by in trades at the end of the day. Take a look at some of our players who are able to be leaders in the league in smaller categories such as shots on goal, plus/minus, and blocked shots. 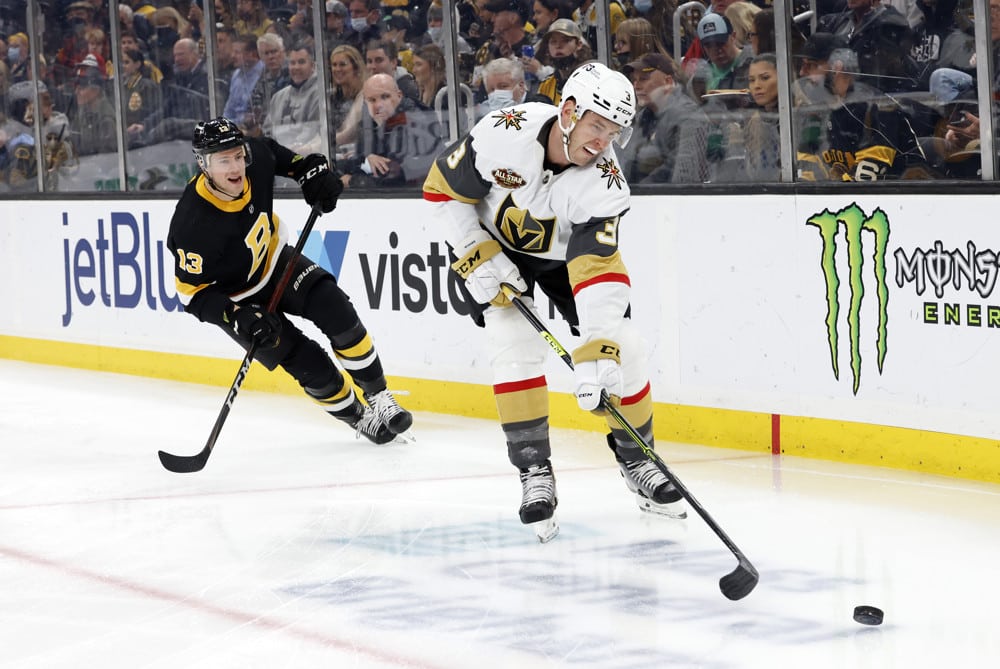 Starting off from the Vegas Golden Knights we have Brayden McNabb. While McNabb does not play the most offensive game, only logging 2 Goals and 7 Assists for 9 points in 39 games, he does find other ways to make a difference in Fantasy Hockey.

The 30-year-old defensive defenseman gets many of his fantasy points in his ability to get in front of the puck before the goaltender and block shots from the other team. In Mcnabb’s 39 games played this year he blocked exactly 100 shots on goal and averages 2.56 blocks a game so far this season. It’s also worth mentioning that in Mcnabb’s last 5 games he has 20 blocks averaging 4 blocks a game which is above his regular-season average.

At only 17% rostered a player like Brayden Mcnabb might just be what you need to get wins in those tight fantasy matchups. 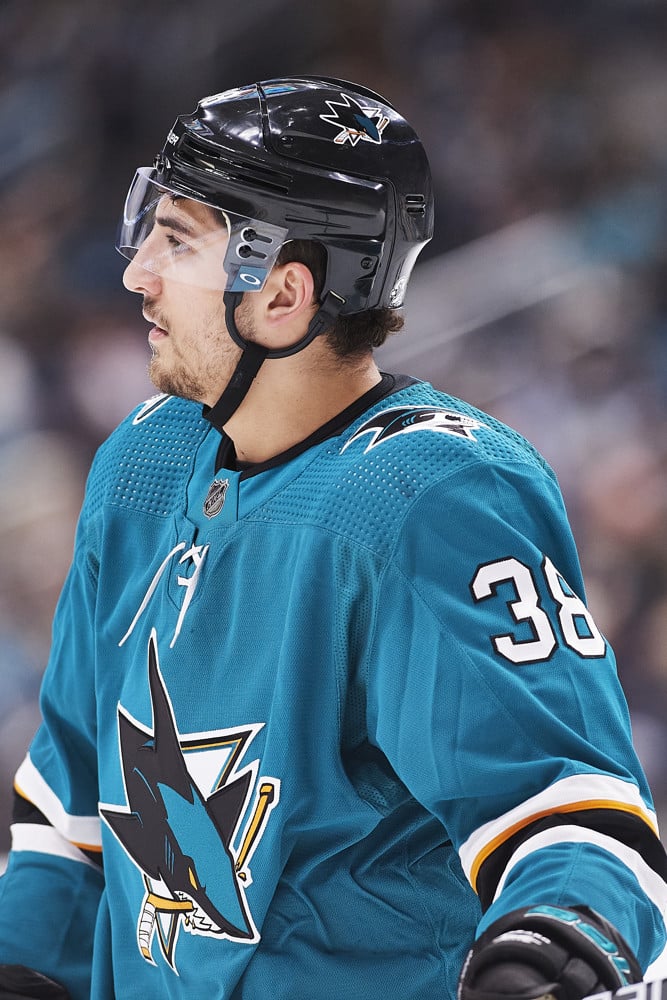 The emergence of the young San Jose Sharks team has meant that many of the team’s new faces have had to step up in a big way to bring the team in the direction of the playoffs. One of those pieces is defenseman Mario Ferraro.

While the 23-year-old blueliner has only put up 2 goals and 9 assists in 37 games this season his contributions have come in his blocked shots. Through the span of 37 games, Ferraro has put up 104 blocked shots averaging over 3 blocks a game. At only 19% rostered this could be someone that gives your fantasy team a much-needed boost in production and is most likely available in your league. 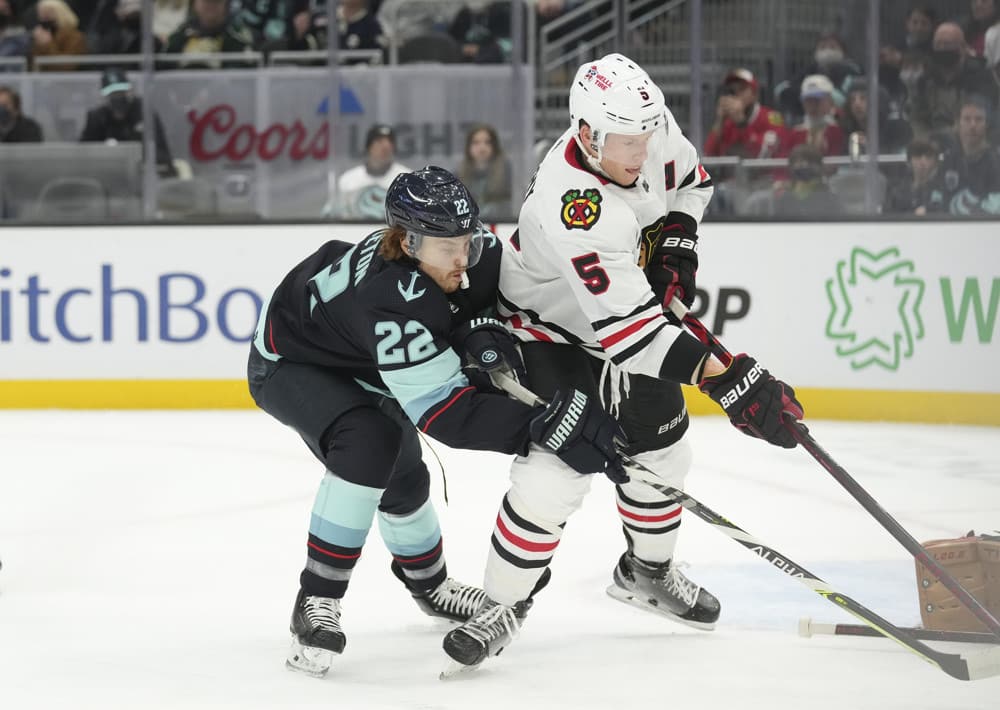 Since the firing of Chicago Blackhawks head coach Jeremy Colliton, the team has stepped up their game in all three zones of the ice and it has shown within the team’s in-game performance. One player who has been a little bit more noticeable than some is defenseman Connor Murphy.

The team’s alternate captain has shown what it truly means to be a leader by always putting his body on the line and attempting to block every shot that comes in his direction and his stats show it. Through his 36 games played this season, Murphy has managed 92 blocks for an average of  2.55 blocks a game. At only 9% rostered he could be the guy you need to get those final points in a tight matchup.

Fantasy Hockey Advice: Players To Target For Shots On Goal 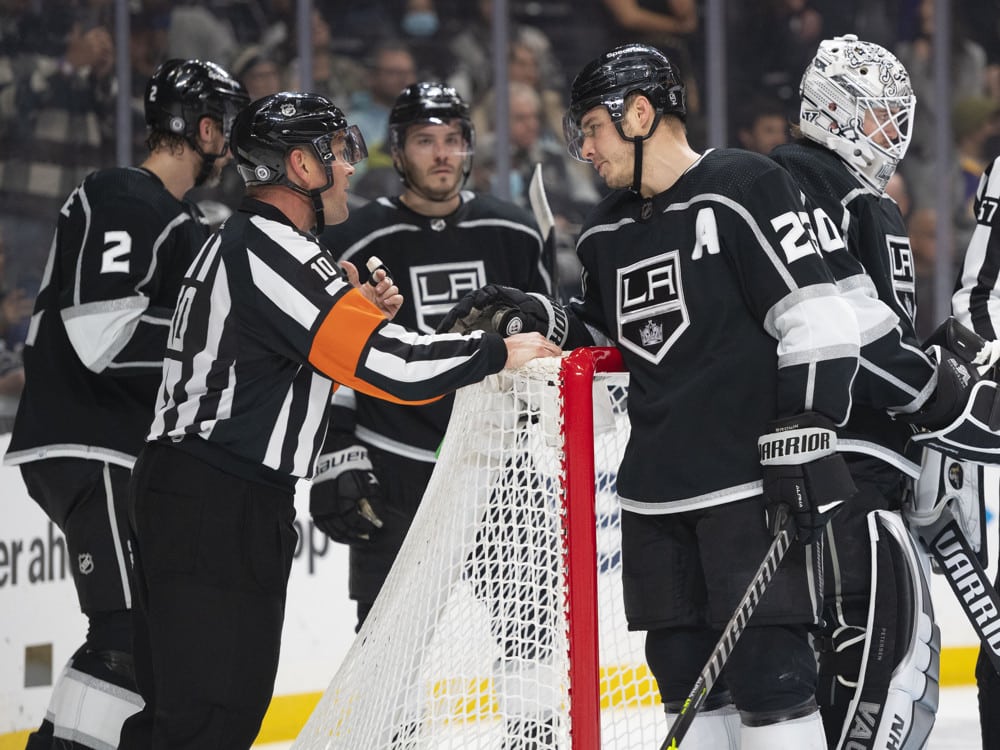 As the LA Kings exit rebuild mode and begin to start identifying themselves as contenders, many players have had to bring their play up to the next level. One player in particular that has done this and been noticeable is alternate captain Dustin Brown.

The 37-year-old has tallied 6 Goals and 11 Assists for 17 points in 35 games which isn’t too shabby, but that’s not where he is making the biggest difference so far this season. His shots on goal production has made the biggest difference this year for him as a solid fantasy player down the stretch. In Brown’s 35 games played he has put 106 shots on goal for 3.02 shots per game.

At only 9% rostered so far this year you might be able to grab him off the waiver wire and get some huge points to help your weekly matchups and league standings. 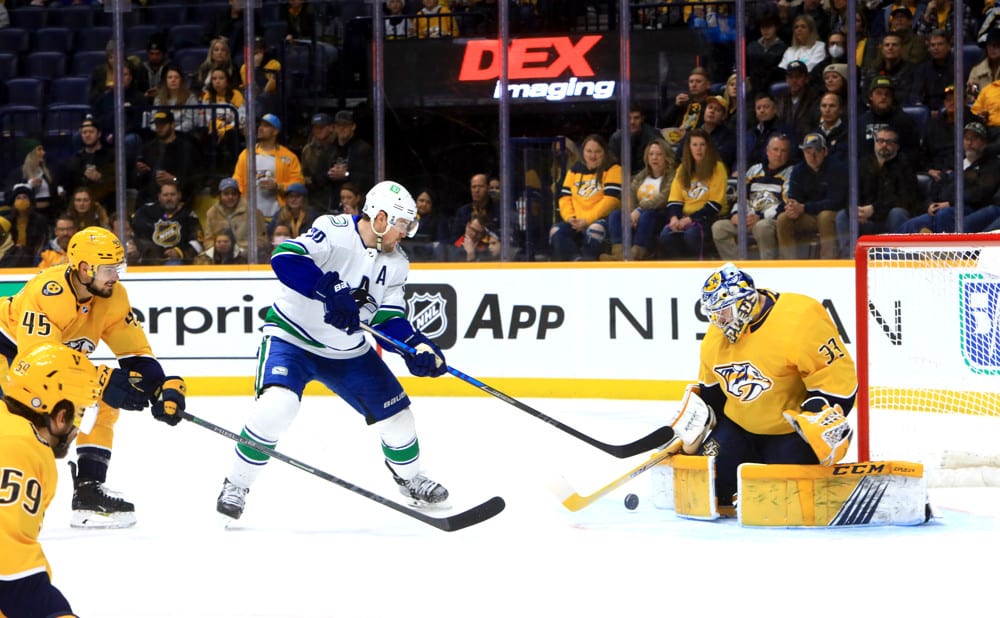 Since the firing of Vancouver Canucks head coach Travis Green the team has stepped up in a big way as so has forward Tanner Pearson. The 29-year-old  forward has been good for 6 goals and 10 assists in 39 games with the Canucks this season.

While those are solid numbers, it is not where the alternate captain has made the biggest difference this season. In his 39 games played Pearson has managed to put up 100 shots on goal for an average of 2.56 shots a game.

In many leagues, shots on goal is a major difference in if you win or lose in a matchup and a guy like Pearson who is constantly shooting the puck could be the difference-maker you need. At only 9% rostered I believe he is a must-add for some additional points in a close matchup. 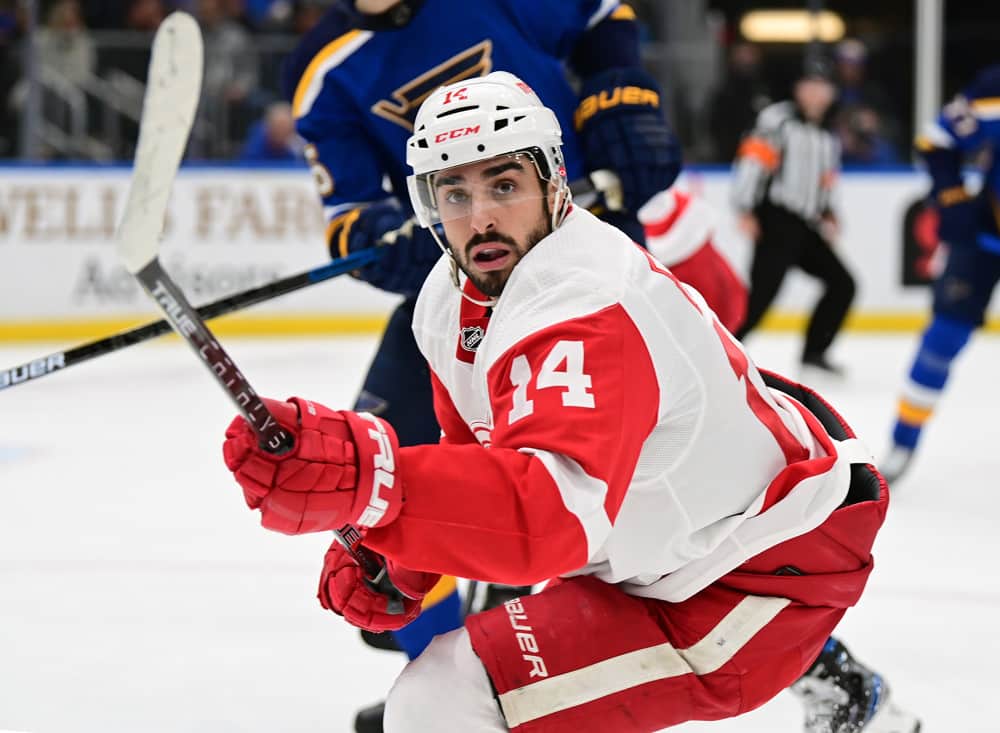 As the Detriot Red Wings start to make a name for themselves again in the Eastern Conference, many players have started to make a name of themselves as well. One player that is making his name known for Red Wings fans from his play on the ice would be forward Robby Fabbri.

The 25-year-old has had a respectable start to the season putting up 10 goals and 7 assists for 17 points in 38 games with the Wings. While those numbers are solid, the upside-only gets better for Fabbri once you take a look at his shots on goal.

Through his 38 games, Fabbri has managed to put up 94 shots on goal for an average of 2.47 shots on goal. These numbers along with his point production lead me to believe that Fabbri is a must grab and at only 6% rostered he is more than likely to be floating around your waiver wire. 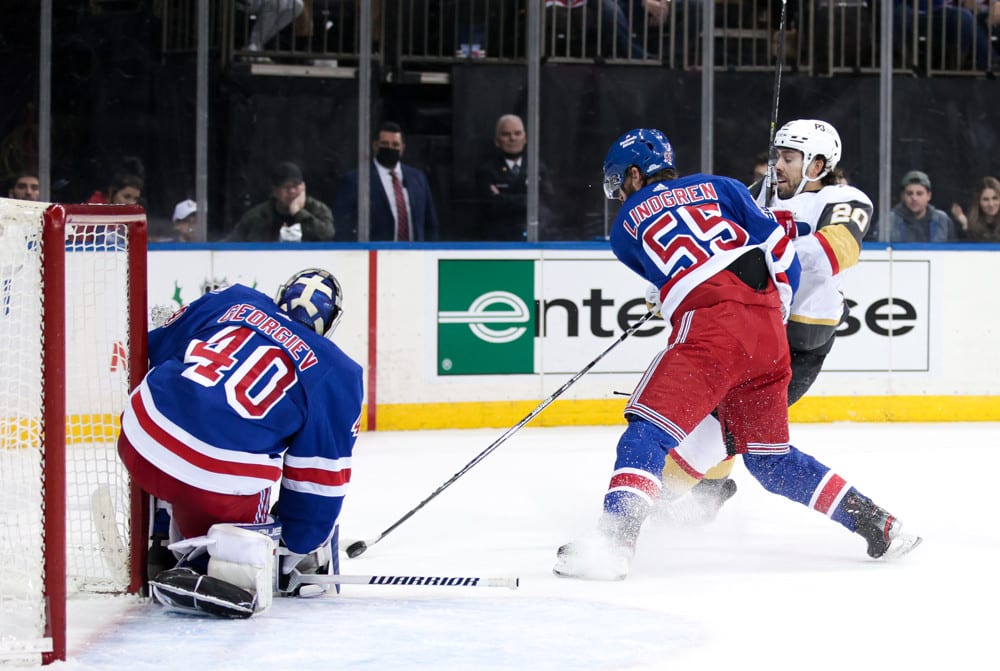 It is no secret to the NHL that the New York Rangers are finally turning into Stanley Cup Contenders. The emergence of their younger players is setting the team up for success not just for this season but for many seasons to come. One player that has stood out in this core of young talent is defenseman Ryan Lindgren.

The 23-year-old has put up 4 goals and 3 assists for 7 points in 36 games with the Rangers but that’s not where he is making his biggest difference as a fantasy hockey player as his Plus/Minus numbers this year have been elite.

While spending his ice time on the first defensive pairing with Adam Fox, I think it’s safe to say he is on the ice for a lot of his teams’ production as he is currently 20th in the NHL in plus/minus at a +17. At only 6% rostered in fantasy hockey, he is more than likely available in your league and is definitely a must-grab for easy points on your fantasy team. 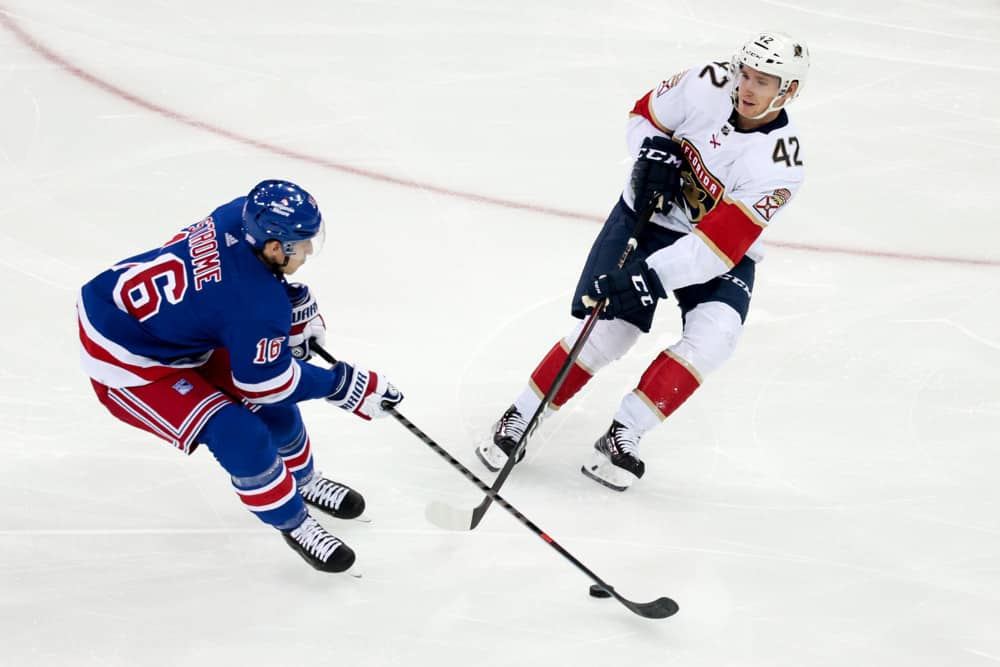 The Florida Panthers are arguably one of the best teams in hockey. That’s meant that some of their players have started to have to play like the best players in hockey. One player that has been a standout as of late is defenseman Gustav Forsling.

The 25-year defenseman has been a go-to for the Panthers as they battle the pandemic throughout the season. With 1 goal and 18 Assists in 34 games this season, his offensive production has been solid this year but that’s not why he’s on our list. His Plus/Minus is right up at the top of the NHL at a solid +18.

Forsling’s Plus/Minus along with his offensive production makes him a must-add to any fantasy team for long-term success. At only 27% rostered he will be someone that should be easy to come by in any fantasy league. 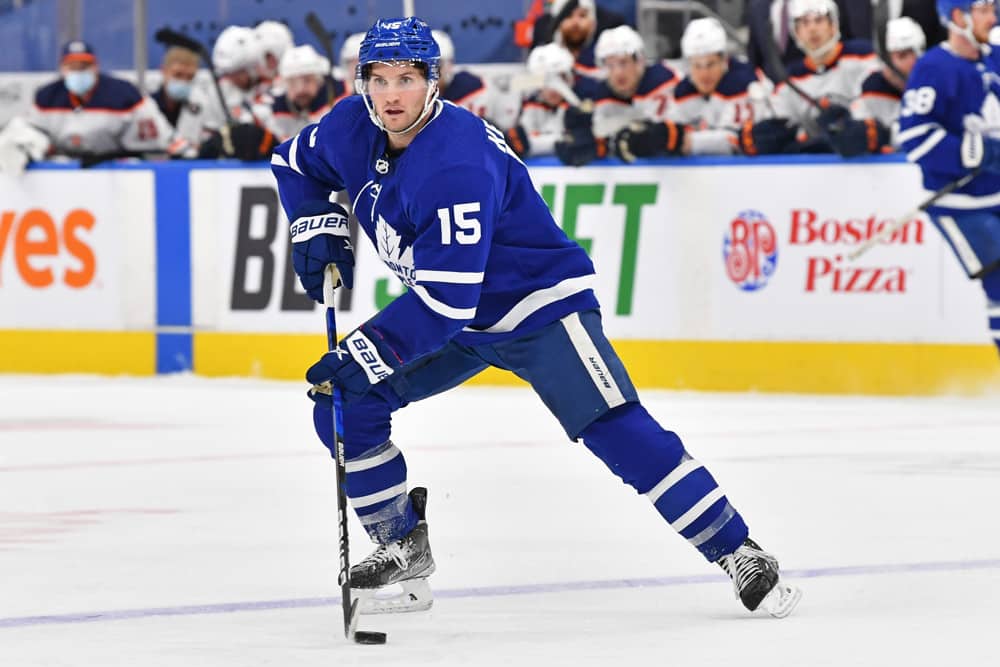 As the Maple Leafs make another push for a Stanley Cup they are going to need everyone to continue their consistent play for the rest of the season. One player whose consistency has been very important through this season has been forward Alexander Kerfoot.

The 27-year-old has been a solid playmaker for the team putting up 6 goals and 20 assists for 26 points in 37 games. If those numbers don’t convince you that he is a mus add then you should take a look at his plus/minus. In his 37 games played with the team, Kerfoot currently sits at a +16 which is right at the top of the Maple Leaf’s roster.

At only 27% rostered, Kerfoot is a must-add for your fantasy team and someone who will have much future success.