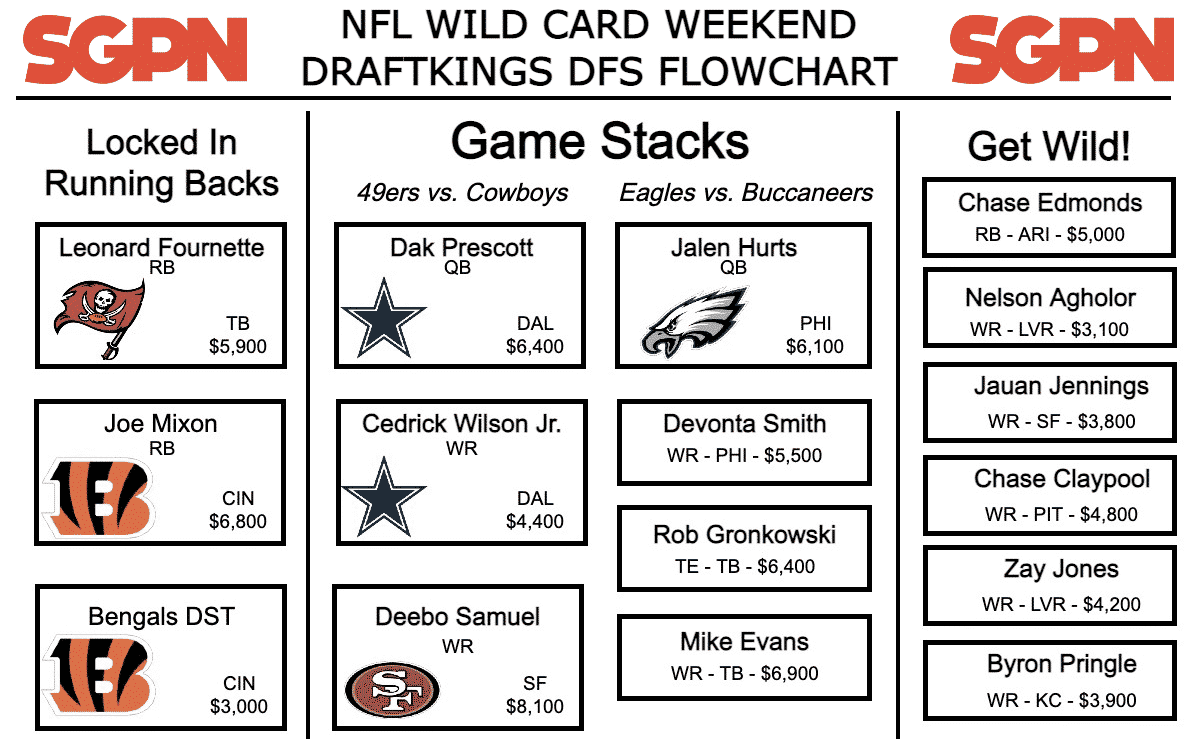 The 2021 NFL regular season left us with a lot of gray hairs, or simply less hair. You would think we could sit back and exhale a bit, but now the real season begins! Wild Card weekend is everything its name implies each January, especially for those who get our rocks off in the DFS lobbies. DraftKings has a Milly Maker on Saturday and Sunday on two separate main slates. To mingle with the masses and provide you all with the most informative content, I will be breaking down my though process to build lineups on the full (six-game) slate. From Saturday afternoon to Monday night, the vast majority of us will have more full slate builds than the two smaller mains.

With 12 teams looking to move one step closer to hoisting the Lombardi Trophy, the scoring on the full slate will be quite high. All but the Patriots and Bills game from freezing Buffalo are sporting high expected totals. Quarterbacks drive the scoring in the NFL and we have quite a few great ones in action. Your pathway to DFS success will most certainly involve a strong correlative focus on one or two games, instead of sprinkling a little from all of them. A strong game stack is the type of aggression you’ll need to see your clever handle at the top of the leaderboard. Cutting the size of a normal main slate in half also requires the smart DFS player to shoe horn as much leverage into their builds as possible.

It’s usually wise to distill your favorite players on a particular slate into an ultra-condensed core of three or four guys that will serve as building blocks. I happen to have three (and a half) this week. It’s premature to put too much stock on projected roster percentage at the moment, but I’m locking in my two running backs first. Our best opportunities for leverage will be at wide receiver and tight end anyway. Heck, I only have four total running backs that I’m playing at all this weekend. Building around two sturdy pillars like Joe Mixon and Leonard Fournette gives me free reign to rip my shirt off and scream “ANARCHY!!!” as I play unpopular receivers.

I am a story teller. Most of my DFS success over the years has come when I am able to accurately write the script for upcoming games. Since leverage will be paramount on a smaller slate, the story for this weekend will be more “science fiction” than “textbook.” With four or five games having shootout potential, the big money will follow the DFS architects that stack the best players from one of the games with less fanfare. The game that comes to mind is the Bucs/Eagles. Jalen Hurts is the king of garbage time and is barely priced above Gardner Minshew. I have him projected for the third-most points at the quarterback position. Here is the interesting part: I want to stack Hurts with Buccaneers receivers. Matching Hurts up with Goedert or Smith is fine, but I much prefer the upside of Mike Evans and Rob Gronkowski.

The other game stack that can also squeeze in the same lineup comes from the Cowboys/49ers game. The whole world knows that CeeDee Lamb is both elite and underpriced. It has also been confirmed that he will be an extremely popular choice. Lamb is also not on a torrid heater like Deebo Samuel. Go get Deebo and run him back with Cedrick Wilson at $4,400. Wilson has been a revelation in Dallas this season, especially without Michael Gallup. Dak Prescott at $6,400 is an awesome points-per-dollar value this weekend too. If you’re not feeling Hurts, just swap him with Dak.

With six or seven players locked in, you will need to throw in that funky monkey wrench leverage flex play, along with a defense. Think of a player on one of these underdogs, whose potential breakout game could spawn an upset to send the slate into utter chaos. I won’t force you to drink my Kool-Aid, but a few names on my leverage list are Chase Claypool, Nelson Agholor, Kendrick Bourne, and Zay Jones. It also wouldn’t surprise me if either Brandon Aiyuk or Jauan Jennings touched up a generous Dallas secondary. It very well could be one hair-brained addition to your roster that sets you apart and helps you leap to the top. I’ve always said, “If it doesn’t make you want to throw up in your mouth a little, it won’t win a GPP.”

Sticking with the narrative, the DST you land on shouldn’t fly in the face of the story you’re telling. For example, if you stack Cowboys, don’t play the 49ers DST. If you go one step further, pairing your defense with one of your running backs can add some intrinsic value to your build. I’m partial to the Bengals with Joe Mixon myself, but also see potential with the Cardinals with Chase Edmonds. With so many points likely to rain down this weekend, I’ll be focused on pass rush versus offensive line matchups. If you can get sacks and turnovers from your defense, you’re set.

The sweat will be real this week, with wide swings on the leaderboard as each game progresses. I hope you all enjoy watching them and there’s a nice payday waiting for you on Monday night!