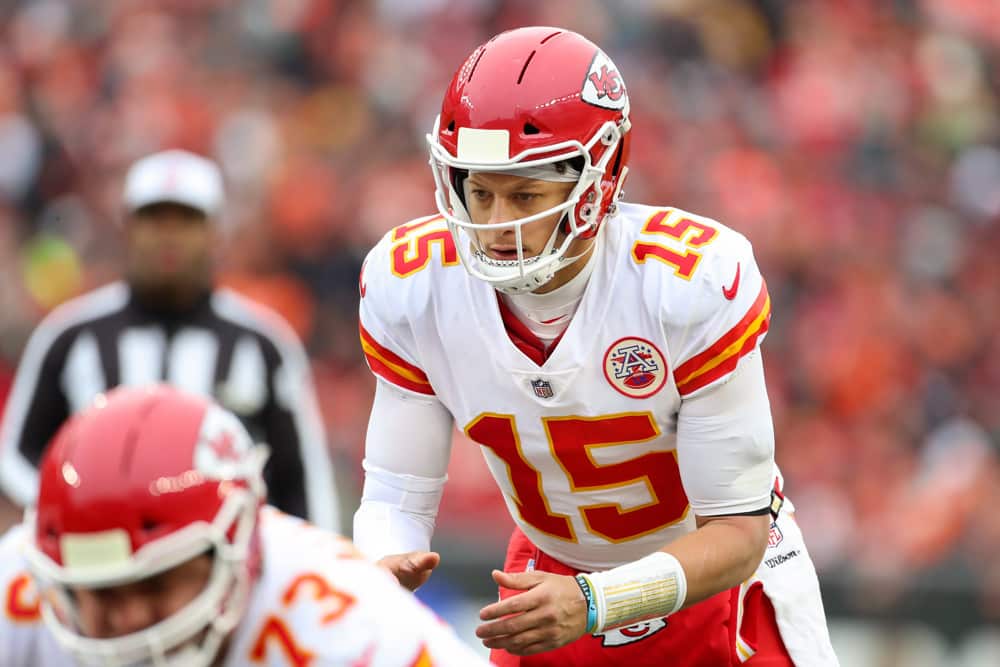 The fantasy football season may be over for most, but these BettorFantasy prop bets will keep you in the action this week.

BettorFantasy has offered users the chance to place bets on head-to-head matchups in their fantasy football leagues. Alongside that, they have offered prop betting straight from their app. With the head-to-head betting done for the season, it is time to jump on some props. Sign up now for your account and get started betting today!

Below are four picks for props that should hit in Week 18. There is quite a bit on the line still for several teams. This means more players should still play hard until the final whistle of the regular season. That is good news for those hoping to have a little fun with betting this week.

You’re probably thinking there’s no way someone can take the under on this prop. The Cheifs are one of the hottest teams in the league of late so it’s understandable to feel that way. That said, take a look at Mahomes’ game log. There you will discover that he has failed to reach this number in five out of his last six games. In fact, since Week 3, he’s only topped this mark three times. While Kansas City may seem flashy, the numbers tell a different story. Even last week, in a shootout with the Chargers, he threw for only 259 yards. On top of that, Mahomes failed to reach even 200 passing yards the last time he faced his Week 18 opponent. The young phenom registered a mere 184 yards against the Broncos back in Week 13. You can expect more of the same this week.

If you are looking for the last quarterback to top this prop total against the Broncos, you’ll need to go back to Week 12. In that matchup, Justin Herbert tossed for 303 yards against the Denver defense. Since then, they have held not only Mahomes, but Joe Burrow and David Carr underneath this number. Last week, they found the answer to Herbert and did not allow him to repeat his performance from a few weeks before. Herbert only passed for 237 yards in the Week 12 sequel. On the season, only three quarterbacks have surpassed 289 yards against Denver. This makes the case against Mahomes hitting this prop even stronger. The Broncos are eliminated from the playoffs and have nothing left to lose. It would be a great end of the season to play the role of spoiler. Should Kansas City lose, they’ll lose the top seed in the playoffs.

Here, we work under the assumption that Mahomes fails to reach his prop total. Although, Tyreek Hill may not even have needed this scenario to play out for this bet to cash. Only once in the last five games has Hill surpassed this total. In three out of those five, he failed to gain more than 40 receiving yards for the day. It’s not that he is no longer the most explosive player in the league. He is. He already has over 1,200 yards this season. His situation has always been that his breakout games are far more flashy than his pedestrian ones. His last meeting with Denver was one of the latter. In that game, he caught only two passes for 22 yards. He didn’t even reach five fantasy points in a PPR that day.

It will be tough sledding for Kansas City in general and Hill specifically this week against Denver. No receiver since Chase Claypool in Week 5 has reached or surpassed the 100-yard mark on the Broncos defense. The closest anyone has come to that is when Tyler Boyd hung 96 yards on them in Week 15. What’s more, over the course of the entire season, only five wideouts in total, have reached this total. They have managed to tame the likes of Ja’Marr Chase, Mike Williams, and yes, even Hill himself all season long. Denver will most likely not win this game, but they will certainly try to make it tough for Kansas City to leave Mile High Stadium with a victory. A majority of that will come from stopping HIll from having one of his explosive games and hitting the under on this BettorFantasy Prop Bets suggestion.

Please save all condemnation of this prediction until all evidence has been presented. As is the case with many big names, it’s hard to imagine taking an under on their production. This is especially true given the seemingly low total for this prop. With that in mind, we go to the tape. In five of his last six outings, CeeDee Lamb has failed to reach 70 receiving yards. Up to that point, he was riding a hot streak. That streak has cooled off immensely. Even when his team completely dismantled Washington, Lamb accounted for only 61 of the total offensive yards. The last time he saw the Eagles back in Week 3, he gained only 66 yards on three receptions. The Cowboys are loaded with talent and Amari Cooper is still a big name there. As long as that is the case, Lamb’s potential is capped.

Just an outstanding throw from Dak Prescott to CeeDee Lamb on the over route. Gorgeous. #Cowboys pic.twitter.com/YfAXk0CSib

For all the inconsistencies the Eagles have faced this season, stopping pass catchers is not one. Over the course of the 16 games played so far, Philadelphia has allowed only five receivers to cross the 70-yard mark. Lamb was not one of them. The last to do it was Elijah Moore who totaled 77 yards in their meeting. One would think that the Eagles may let up some given the fact that their postseason ticket has been punched. That may have been the case against any other opponent, but not a division rival. Dallas has the NFC East title, but the Eagles are still fighting for the 6th overall seed. They will be doing everything in their power to get it, and send Dallas into a matchup with Arizona as the 4th seed.

The world witnessed the final home game in Ben Roethlisberger’s storied career in Pittsburgh. In that game, with seconds on the clock and needing only two yards to ice the game, Najee Harris busted through the line for a 37-yard touchdown. It put an exclamation mark on an emotional game for the fans at Heinz Field. More than that, it pushed him over the 1,000-yard rushing mark in his rookie season. He’s been a bright spot on a frustrating Steelers offense this year, posting numbers above this prop in three of his last four games. Against the Ravens in Week 13, Harris carried the ball 21 times for exactly 71 yards. His team is in a game with playoff implications and will need him to carry them to the postseason. That alone should give him the motivation to gain that extra yard you’ll need to cash this prop.

He’ll be facing a rocky road this week though and the yards won’t come easy. Last week, Sony Michel ran for 74 yards against Baltimore. Only one other back has gone over the prop total against the Ravens all season. The last to do it before Michel was Dalvin Cook in Week 9. All that said, this is going to be a low-scoring, slugfest in which the run game will be front and center. You have to think that Harris will give them all they can handle this week as both teams fight for a spot in the playoffs. The rookie came within a yard of this prop the last time they met. It will be hard for them to stop him from getting that yard and then some after his inspired performance on National Television last week. This is one of the best BettorFantasy Prop Bets this week.