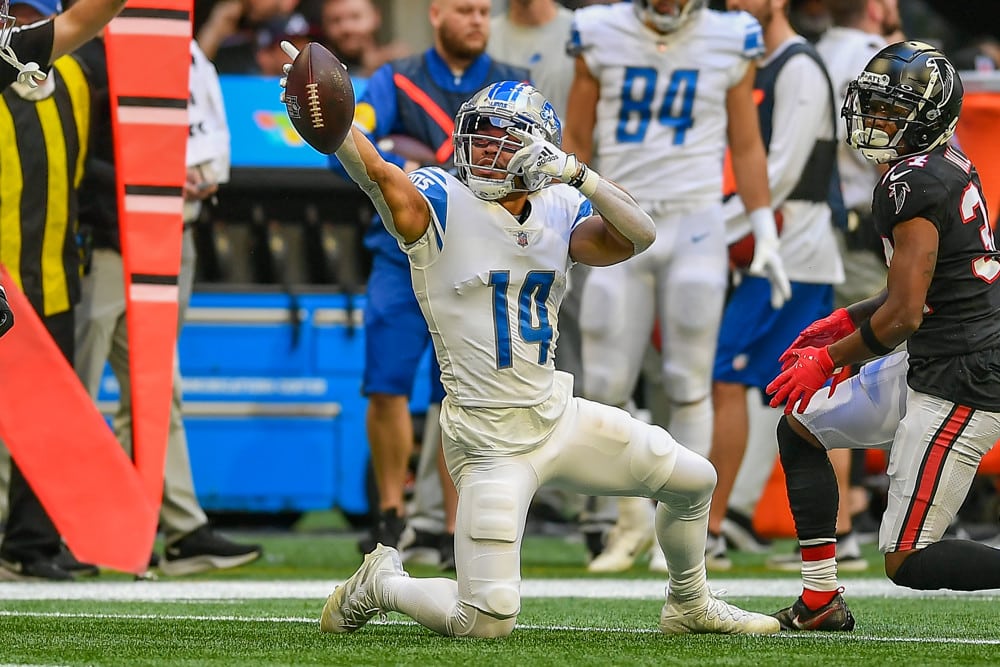 Welcome to the Top 10 DFS stacks article where I will be breaking down the DraftKings main slate to identify my top 10 DFS stacks for Week 17. Stacks in DFS can be defined as; playing two or players from the same team in a single lineup. Stacking in DFS contests has become the predominant roster construction strategy particularly for GPP tournaments, with a variety of unique and creative ways to build stacks and maximize your scoring upside each week. The most popular stacking options include the skinny stack, the double-stack, the run back stack, and the full-on game stack, and the running back paired with a defense stack.

Reports are that Matthew Stafford has been dreaming all week of the Ravens’ secondary after watching them give up 500 passing yards to Joe Burrow in Week 16. Just what the doctor ordered for Stafford who has struggled the last two games, scoring only 25 DraftKings points combined. Cooper Kupp, on the other hand, stayed red hot, scoring 37 and 24 points the last two weeks. The Ravens have surrendered 2,790 receiving yards to wide receivers, the third-highest so far this season. Kupp will eat this week. Even better, he shouldn’t be too highly rostered given the 14-game slate.

Apparently, Ravens’ tight end Mark Andrews is quarterback and matchup-proof. The last three weeks he’s scored 31, 38, and 29 DraftKings points with three different quarterbacks under center. John Madden would be proud and he’s the Raven pass catcher you want in your run-back stack if you are rostering Stafford and Kupp. This stack plays well in medium-sized single-entry GPP contests and in Cash games.

Josh Allen ($8,000) is a happy many. He just learned that he will have his full arsenal of offensive weapons this week against the visiting Atlanta Falcons. Cole Beasley and Gabriel Davis both returning is great news for your DFS lineups, not great news for the Falcons. Allen looked unstoppable last week against Bill Belichick and the suddenly exploitable New England Patriots defense.  The Falcons are way worse than the Patriots. They rank 30th against quarterbacks, having given up 3,781 passing yards and 30 total touchdowns to quarterbacks.

Allen’s best weapon is wide receiver, Stefon Diggs ($7,900). Diggs had a quiet start to the season but has seen more opportunities the last seven weeks. His 68 targets have led to six touchdowns over that span. Running it back with Kyle Pitts ($5,900) is the high-upside play in this game stack. Pitts has been seeing consistent target volume (7.2) all season and should see plenty of work in a game the Falcons are 14.5 point underdogs. This stack is best for large field multi-entry tournaments.

Josh Allen is the first player in NFL history with at least 4,000 passing yards, 30 pass TD and 600 yards rushing in a season.https://t.co/HiUqqcYfYF pic.twitter.com/SPvFZWxFCH

Patrick Mahomes ($7,800) and the Kansas City Chiefs vs. Joe Burrow and the Cincinnati Bengals is my favorite game to stack this week. The Vegas Sportsbooks currently have the game with a 50 point total, the second-highest on the board. With 63 passing touchdowns between them, both of these offenses have explosive potential. I’m stacking Mahomes with Tyreek Hill and running it back with one Bengals’ wide receiver. Tee Higgins priced at $6,900 makes the most sense in this run-back given Ja’Marr Chase‘s $7,600 price tag. This game stack is expensive, making it a great play for high-stakes single-entry GPP tournaments.

In the last two weeks, Tom Brady has thrown one touchdown, one interception, and has only 446 passing yards. Brady’s 10.8 points per game average in those two games is the lowest of the season. Missing Chris Godwin and Mike Evans definitely caught up with him. This week the public might be inclined to fade an aging Brady for a young gun like Kyler Murray or Josh Allen. I understand all that, but Brady has been lethal against the Jets over the years, passing for over 8,000 yards and 57 touchdowns.

With Antonio Brown priced at only $6,100, expect the Brady-Brown stack to be a popular one. I will be running it back with Jets wide receiver Braxton Berrios at only $3,700. The Jets and Zach Wilson should be trailing all game, meaning that Berrios will be live, particularly in the almighty witching-hour garbage time Scott Hansen loves so much. Sports Illustrated is reporting that both Elijah Moore and Jamison Crowder are likely to miss this game, opening the door for Berrios to see the target volume from Wilson.

Some notable incentive and record-chasing:

It is safe to say Dak Prescott ($6,700) is back. If you stopped reading, I get it. I too was burned by Dak, both in DFS and also in my fantasy football home league, where I drafted him in the sixth round to stack with CeeDee Lamb this season. Pour one out for “CeeDee’s TD’s” (Trademarked). It was not meant to be in the regular season, but there is redemption to be had in DFS this week. The Cowboys vs. Cardinals have the highest total on Vegas’ board this week at 52 points. Everyone is expecting this game to be a shootout. The best player on the Cowboys is still Dak. With his price tag set at $7,100, Lamb is his best weapon.

James Conner missed Week 16 for the Cardinals and he is yet to practice this week. If he misses the game, Chase Edmonds priced at only $5,700, becomes a great run-back option to pair with a Cowboys’ stack. if both running backs are active, I will pivot to wide receiver Christian Kirk as the best option.

Most passing TDs vs the blitz

6 more than anyone else pic.twitter.com/JNcccipNTB

Stick a fork in the Washington Football Team, they are done this season. Jalen Hurts ($6,600) and the Eagles on the other hand are about to qualify for the playoff. These are two teams heading in very different directions since they met just two weeks ago. In that matchup, Hurts scored 29.6 DraftKings points, completing 20 of 26 passes for 296 yards and a score. He also rushed in two more touchdowns. The WFT ranks 32nd against quarterbacks and 30th against wide receivers, giving up 23 and 40 points per game to each respectively. Well, to be honest, there’s nothing respectful about it. Devonta Smith might go under the radar after a quiet game last time he faced the WFT, but the breakout potential is there given the Eagles’ offensive maturation the last month of the season.

The WFT is going to get crushed. I’m completing this onslaught stack with the Eagles defense at $3,700. They should have a field day with this banged-up WFT offense. This stack plays in all formats. Wheels up!!

Tyler Lockett ($6,400) has the highest-graded cornerback match-up this week according to PFF. With four games of 29 or more points through 14 games, Lockett has the explosive upside we are looking for in this battle of subpar teams. At only $100 more expensive at $6,500, D.K. Metcalf should be considered if you are too shy to roll with Lockett, as both have mismatches that Russell Wilson should be able to exploit.

Amon-Ra St. Brown has been the truth the four weeks, scoring 90 points the last four games. His 11.5 targets per game have led to 35 receptions and three scores. He’s averaging 22.5 points per game during that stretch. Last week it was Tim Boyle passing him the football, Jared Goff the week before. It doesn’t matter the quarterback, the Lions are committed to getting St. Brown reps. Let others get scared off by his $6,000 price tag.

Circling back to this, since he became a full-time player Amon-Ra St. Brown is basically playing a Cooper Kupp lite role https://t.co/g2GWWaa10h

Trey Lance is priced at only $4,800 this week. He’s going to be massively popular given his cheap price and his favorable matchup with the Houston Texans. Deebo Samuel ($8,700) is the most obvious stacking option given his consistent role in the rushing game. He’s scored over 20 points seven times this year and gone over 30 points on four of those occasions. In the two games that Lance started this season, Deebo scored 54.8 DraftKings points. Brandin Cooks is the most expensive Houston Texan at $6,000, but he’s worth the price, given his game-breaking ability. His 53 points in his last two games make him a great value this week in both Cash and smaller field GPP contests.

Whether Carson Wentz plays or not on Sunday, Jonathan Taylor ($9,000) is going to get his. RunTheSims.com projects his optimal rate to be 20% this week. He’s the best running back play on the board and it’s not even close. The Las Vegas Raiders rank 30th in the NFL against running backs, giving up over 27 points per game. Last season as a rookie, Taylor lit up the Raiders for 150 rushing yards and two touchdowns on 20 carries.

On the Raiders’ side of the ball, Hunter Renfrow ($6,500) has become their offense the last month with Darren Waller on the shelf. Renfrow has 41 targets in his last five games. His 443 receiving yards and two scores have helped him post performances of 22, 24, and 32 DraftKings points in three of those five weeks. The Colts defense has been vulnerable against wide receivers this season, giving up 19 total touchdowns.

Jonathan Taylor & Joe Mixon are simply on another level 💪 pic.twitter.com/aJVkBJ6vI6

Players to pair with: Colts Defense

This Davis Mills ($5,500) led stack is brought to you by my guy Bo McBrayer, head DFS writer for me over at NimblewNumbers.com. Mills has performances of 27, 21, and 24 DraftKings points this year. Those games were against New England Patriots, the LA Rams, and the Seattle Seahawks in games they were heavy underdogs. Mills has four touchdown passes in his last two games. Brandin Cooks is the wide receiver you want to stack with Mills. His 119 targets are more than all other active Houston Texan wide receivers combined.

Trey Lance is going to be very popular, so will Deebo Samuel. Stacking Brandin Cooks ($6,000) with Mills and running it back with Brandon Aiyuk ($5,900), leverages you against the GPP tournament field. If either one of Deebo or Lance falls flat, you might just have the nuts given how poor both defenses have played this year.