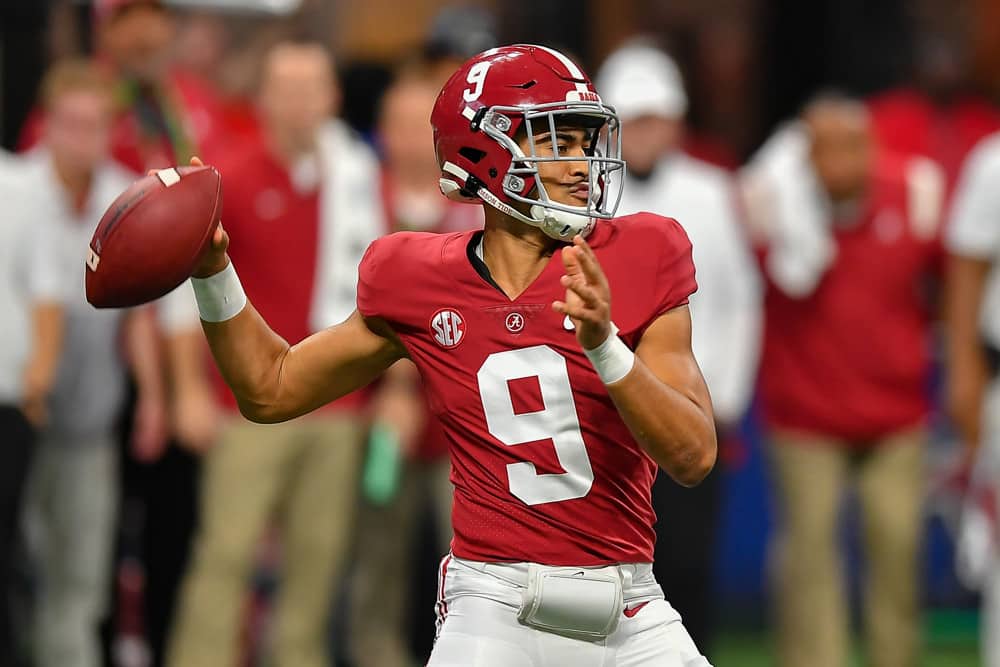 While bowl season has been fun we can now move on to the games that aren’t glorified exhibitions. Finally, no opt-outs, no transfers, and no coaches that have already moved on. It’s College Football Playoff time and we have two great matchups heading our way on New Years’ Eve.

Here’s my preview and pick for the early game.

Arlington, TX will be the site for the first of the 2021 CFP playoff matchups. The #1 seed Alabama Crimson Tide enter at 12-1 with Heisman trophy winner Bryce Young at QB. While Alabama had another excellent season, there was the three-point loss at Texas A&M and several close calls down the stretch before walloping Georgia in the SEC Championship game.

The tight games Bama pulled out include one-score home wins over LSU and Arkansas and the O.T game at Auburn to end the regular season. Alabama certainly was not as dominant as last year when they blew out everyone except Florida in the conference championship. A 7-6 ATS record is evidence that the Tide were not head and shoulders above their competition.

On the other side of the field, the #4 Bearcats went 13-0 and are the first-ever non-Power 5 program to reach the CFB Playoffs. It’s also basically the same Cincy squad that went undefeated in the 2020 regular season before losing 24-21 to Georgia in the Peach Bowl.

While the Bearcats cruised through most of the schedule this season, including an impressive 24-13 win at Notre Dame, they also had a couple of mid-season close calls. One score wins at Navy and vs Tulsa were less than impressive. During that stretch, Cincy went 0-4 ATS but closed the year out strong finishing 8-5 against the spread.

Looking at each offense, Alabama has transformed itself into a pass-heavy team. Not only did the Tide finish the season throwing for almost 350 YPG but their 44 passing TDs finished second highest in the country. Stepping in for Mac Jones, Bryce Young had an excellent sophomore campaign – throwing for 4,322 yards and 43 TDs to just 4 INTs.

A big blow to the passing attack will be the absence of John Metchie III who will miss the game after suffering an ACL injury vs Georgia. The 1-2 combo of him and Jameson Williams combined for 164 receptions, 2,587 yards, and 23 TDs. The rest of the Alabama wideouts are inexperienced and unproven. Slade Bolden is solid in the slot and Cameron Latu and Jahleel Billingsley are a formidable duo at TE but none of these three put fear into the hearts of opponents. They will need one of their 4- or 5-star underclassmen to step up opposite of Williams to keep the Cincy D honest.

It’s somewhat shocking how mediocre the Alabama ground game was this season. Brian Robinson Jr ran for over 1,000 yards and 14 TDs but was nowhere near as dynamic as Najee Harris or other Bama backs have been. Plus, the offensive line play was average at best. The Tide only averaged 4 yards per rush which ranked 80th in the country. Additionally, Bryce Young was sacked a whopping 33 times. To compare, Cincy’s Desmond Ridder was only sacked 20 times.

Speaking of Ridder, the senior QB has improved over the last few years culminating in a 2021 season with 3,190 passing yards and 30 TDs to just 8 INTs while completing 66% of his passes. Additionally, he’s much more of a dual-threat than Bryce Young. Ridder has rushed for over 500 yards in three straight seasons and has 28 career rushing TDs.

The bell cow in the Bearcat backfield is Alabama-transfer Jerome Ford. Ford had a monster year, rushing for 1,242 yards and 19 TDs while averaging over 6 yards a clip. He’ll be looking forward to a big game against his former team and while his OL has pushed around lesser opponents, Alabama is a different breed. I’d expect his effectiveness to be limited.

Cincy has much more of a balanced approach offensively as illustrated by the numbers below. In the passing game, the Bearcats like to spread the ball around with six pass-catchers reeling in over 20 catches this season. WR Alec Pierce leads the team in receptions, yardage, and TDs (50-867-8) with Tyler Scott, Tre Tucker, and Michael Young all chipping in. Tight ends Josh Whyle and Leonard Taylor have also combined for over 50 catches and almost 600 yards with 10 TDs. Expect Ridder to look for his TEs in the red zone often.

Defensively, it will be strength on strength for both programs. Alabama has a top 5 rush defense in the country and if they can slow down Jerome Ford, the Bearcats will have trouble putting up points. By now most have heard of LB Will Anderson but his LB mates Henry To’o To’o and Christian Harris form an excellent trio. As usual, the DL is extremely stout and led by Phidarian Mathis who has 8 sacks on the year. The Cincy OL is legitimately good, but it’ll be a tough battle in the trenches vs a rested Alabama front seven.

On the other side, it will be up to one of the best pass defenses in the nation to slow down Bryce Young. DE Myjai Sanders hasn’t come up with as many sacks this season but he’s still one of the best pass rushers in the country. The Bearcats also have arguably the best CB duo in the nation in Ahmad Gardner and Coby Bryant while S Bryan Cook is an all AAC caliber player. We saw what Bama just did to an excellent UGA defense and although Cincinnati has NFL talent littered through their unit, they’ll have an uphill battle.

College Football Playoff: Cincinnati vs. Alabama Between the Lines

As you might expect from two teams in the CFB Playoffs, both programs excelled in the turnover margin category. Somewhat surprisingly, both programs were equally bad when it came to being penalized. The special teams’ advantage is on the side of Alabama. PK Will Reichard is an upperclassman and is well-versed at kicking in big games. Meanwhile, Cincy trotted out three different kickers this year and none were over 50% accurate.

The Group of 5 finally has their chance. Cincinnati is a veteran team full of experienced upperclassmen who have proven their merit over the last few seasons. The game may just come down to QB play. Obviously, Cincy will have to limit the effectiveness of Bryce Young and the Bama passing attack. Additionally, Desmond Ridder needs to have the best game of his career. If the running game stalls, he needs to beat Bama through the air while using his feet to pick up critical first downs.

The loss of John Metchie III should not be understated. If the Bearcats can shadow Jameson Williams and stop the big play, they’ll keep this game close enough to cover. It wasn’t like Alabama was dominating teams leading up to the Georgia game.